Once upon a time poetry offered a realization of the dream of unalienated labor. The poet, as both writer and reader, tuning into the community while being tuned into by the community, produced and consumed the products of her own labor. For this poet, life power affirmed labor power and vice versa. The radicality of poetry was in its free human sensual activity that sowed together poet and poem, subject and object, material life and historical life. The poet, as unalienated maker of her own sensorium, embodied the interweaving natural processes of making with social processes of making.

These kind of dreams are structurally embedded in all our poetics. It is the job of ecopoetics, in part, to remind us of them, even if all along we understood that such dreams themselves were structurally ambivalent, both a rebuke and a lure.

Just tarrying with this fantasy today feels, like, what, enough to make one want to pull out a cell phone or some other sign that people do not totally regret life (fine, that dream is structurally embedded in our media too)? I’d rather say that such fantasies are contributions in their own way to the resistance. I would say these visions are yet another device that ecopoetics harbors, one that all along was based on the combination of retrospective pastoral and futurist, science-fiction scenarios of synthesized better worlds. That’s one reason why I model these posts after the rogue twitter feeds like Rogue NASA, where just looking at Earth now has become a protest movement.

One of the reasons I’ve proposed the frame of post-ecopoetics for this commentary series is to open a space for thinking about the past and the future of such devices. I’ve mentioned previously the sense that all our poetic forms and tropes are under such stress and duress, not just those that we’ve hitched onto ecopoetic projects for environmental justice, animal activism, and postcarbon/postcapital prophecies. Post-ecopoetics is a space for questioning our green crushes, often in the format of “what ifs”: What if ecopoetics doesn’t work? What if it does? What if our carbon capitalism runs out of juice? What if it doesn’t? What if the republic perishes? What if it keeps going? 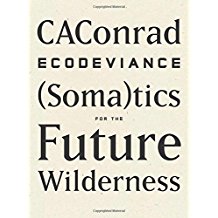 While dragging around these ambivalent questions, I came across two books that shook me: CA Conrad’s Ecodeviance: (Soma)tics for the Future Wilderness (Wave Books, 2014) and Stephen Collis and Jordan Scott’s Decomp (Coach House Books, 2013). These books really came at the right time for me. They helped me to breathe and just be when I needed that reminder.

Neither offers a simple form for how to move forward into an unalienated ecopoetics. Plus, as Conrad shows, however awfully alienated you can get, that’s aesthetically powerful too, not something from which the poet should ever look away. His poem “It’s Too Late for Careful” opens with the poet soaked and awakened by a global-warmed rainstorm:

Ecodeviance as title wraps around itself — queering all those normcore ecofantasies on the covers of outdoorsy magazines, but also registering how what we thought was our ecology has become deviated as our glaciers now pour down on our heads. That same ecodeviance runs through stalking the gardens of neighbors in the morning, and courses through other flashes of “future wilderness” that Conrad encounters:

when you purchase
a car the factory’s
pollution is
100% free
it’s never easy
waking to this
bacteria and light
a legacy of stardust
it is 98.6 degrees
Fahrenheit inside all
humans (134)

Pollution — a legacy of stardust. Ecodeviance happens in the recognition that we can have ambivalent aesthetic relations to pollution that would have us linger a little longer in its haze, at least on the page. In the poem, pollution, like ecodeviance, can spin us in all sorts of directions — to the extent that we might even enjoy being polluted aesthetically, whereas we have much clearer, justified political and ecological reaction to pollution in that we rightfully want it cleaned up. But we don’t want a cleaned up aesthetic, just like the aesthetics of messed-up alienated bodies isn’t something we want to replace with shiny new trees. This was a lesson of ecopoetics had to go through after its initial flurry a few decades ago — so to me the “post-ecopoetic” comes from the feeling one is free to have all the aesthetic and affective hits you want, not just those that are directly activist and ecologically virtuous.

In this poem Conrad puts his foot heavy on parallel constructions or comparisons that twist through his line breaks and alternating left and right margin justifications. One of his parallels sets up two senses of occupy — as a global leftist movement and as a military operation — that sit in witness of each other.

The ending here has notes of sweetness and forgiveness, but I’m not sure right now I can sit and watch any phoenix imagery rising, especially with the ambiguous “us” facing the U.S. at the end. 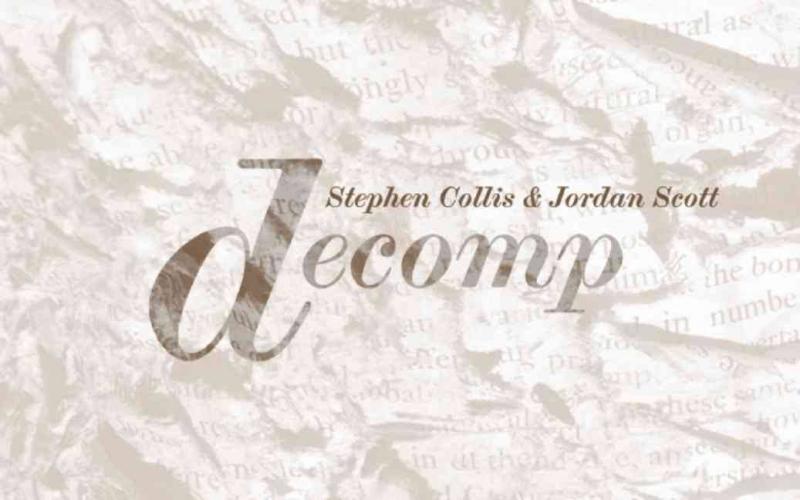 Conrad’s rituals for being present — what he calls (soma)tics — find an echo in Collis and Scott’s Decomp, a work initiated by a year long ritualistic act of leaving out copies of Charles Darwin’s On the Origin of Species in different geographical climes of British Colombia. After a year, the writers returned to fetch the books, documenting what had become of the paper pages. This book “lays bare” the text by laying it down on the ground in different terrains. Here the wear and tear of all our poetic devices is the poem itself. With this ritualistic exercise, the work crosses the divide between the environs in the poem and the environs outside the poem. Beginning with Darwin’s verbiage soaked through and scattered among the species, written through by decomposition, Collis and Scott collaboratively wrote through the remains — writing as the indistinction of decomposition and recomposition. At one point, Collis states the motive as, “I’m not going to put the natural in the text, I’m going to put the text out in to the natural world and see what happens to it” (41). What happens is a multispecies collaborative poetics.

Large parts of the book grapple over mixed feelings of resisting/welcoming the decomposition of our works, our days, our bodies. One cannot but help feel a calm to it all — that’s what I was referring to earlier as the feeling of just being in these two books. Like the detritus enriching our compost, there’s gorgeous aesthetic feeling to be had in watching our own aesthetics decay:

One we dream over. Pour our guts out wondering: Living? Non-Living? And decide upon a substance thinking intimacy as water. We deepen for these dialects left in dirt, in ripening cool crush; cut ground viewed in crustaceous light, vertical and of varying thickness, writhes vocable alpine into a “what will we do?” Forces us upon the shale; force of the letter; heaps of talk all utterly injurious, all utterly quadruple, slips our conversation toward what has died out and the formations of those ochre capsules that we come across in green and seasoned timber. (74)

And there is also unflinching confession of the decomp of one’s own body: “Our magical incantations, worlding ruminants. Fuck us. We are homes for others” (76).

In a powerful Preface to the book, Jonathan Skinner points to the recirculating recognition of the tropic/entropic that runs through Decomp but effectively extends through all our poems. Decomp gets us to recognize that all our poetic devices already have been exposed. We can document that exposure, and make art again from it, and expose it all over again — allowing natural making and social making to wend and eat through each other as they do in every instance of poiesis.

Ever since reading this book, I’ve wanted to leave it exposed outside for a year in different locations. Maybe there should be a movement to leave all our libraries exposed, because, at any rate, all our poems are decomposing in one way or another. Alas, I cherish my copy too much to leave it out — but I imagine a second edition that could be left outside in spaces evocative of Eaarth. Thus, decomp behind a McDonald’s dumpster, decomp in an Alberta tar sands tailings pool, decomp between walls of the back wings of the hospital where nothing will grow. But also decomp left for a year in an urban community garden, decomp wedged between two slats of a border fence, or decomp on Mars.