Qassim Haddad: poetry in conversation with its others

Huda Fakhreddine
The Bahraini poet Qassim Haddad’s (b. 1948) first poetry collection The Omen was published in 1970. It launched him into a long poetic career which has thus far yielded over fifteen poetry collections, among them: The Exodus of Hussain’s Head from the Traitorous Cities (1972), Second Blood (1975), Splinters (1983), The Chronicles of Majnoon Layla (a bold rewriting of the story of the poet Majnun Layla, 1993), Qassim’s Grave (1997), Taraf ibn al-Warda (a tribute and the record of an ongoing conversation between Haddad and the pre-Islamic poet Tarafa ibn al-‘Abd, 2011), and The Endings Disappear (2014).
In his search for poetry, Haddad seeks out interlocuters. He converses with other poets, as poets often do, but he also strikes up conversations with artists of other mediums. He has collaborated with musicians, visuals artists, and theater directors on joint projects: with the Bahraini writer Amin Saleh on a collaborative text titled Bosoms; with the Saudi photographer Saleh al-Azaz on a work titled The Impossible Blue; with the Iraqi visual artist Diya al-Azzawi on an illustrated edition of his poetry collection The Chronicles of Majnoon Layla. The same work was made into a musical in collaboration with the Lebanese composer Marcel Khalife. In his most recent publication, Haddad channels Vincent van Gogh. 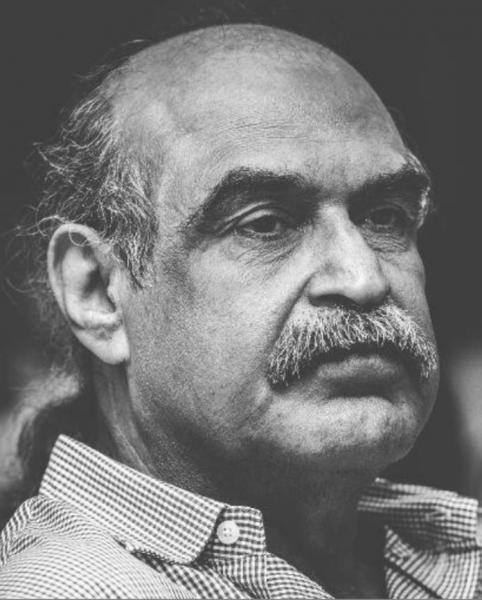 Oh, Coal My Master (2015) is Haddad’s intimate rewriting of Van Gogh’s life and work. Above all, this work captures the urge and the ache for expression and connection which motivates the painter and the poet alike. In the following piece titled “House of Colors,” Haddad speaks of the experience of color in time and space. Color, like words, is the distillation of experience; and painting, like poetry, is “the call of the distant.”
House of Colors
I bring the sandy color turned reddish and the dark hue turned white, clashing with bitterness,  emerging from two places:
Religion and the darkness of mines.
It is wise to linger on this slope. Color is the tent of drawing, maybe the rock on which the painting stands and turns, as though colors are the creation of cities, as if cities gift me their colors.
Whenever I have sought a city, it has granted me the talent to discover a new color: in Holland, brown and dark, reddish and earthy; in Paris golden yellow, unstable and overflowing with redness; in Arles, solitary blue, green aroused and lapis lazuli unleashed. I was the point around which the universe turned. Painting is the call of the distant. My house has room enough for the passer-by, the wanderer, and the fugitive. In knowledge are splinters of the soul, enwrapped in love and a lust for life.
In this conversation, Haddad grasps at a notion of poetry which traverses different modes and mediums of capturing or accounting for experiences. The poem in Haddad’s world is thus a bridge between the self and its others as well as a bridge between language and its others. Here, he reads Van Gogh and attempts to translate him into strokes of poetry. The book ends with a section titled “The voice of God under the stars;” a collection of phrases and fragments Haddad draws out of Vincent’s letters to his brother Theo, such as the following:
Poetry is everywhere.
*
I did not choose adventure. It is my destiny.
*
We spend all our lives, unconsciously, training ourselves to use words.
*
Truth is making a painting speak.
*
Only when in painting, do I feel alive.
*
Death. This is it.
March 5, 2019
< previous post next post >