This photograph of Bruce Andrews, Michael Lally, and Ray DiPalma was taken by Elizabeth DiPalma in early September 1975, in Michael Lally's then Sullivan Street apartment. The print of the original photo, now among Ray DiPalma's papers at Yale, is 8"x10".  We at J2 are grateful to Ray DiPalma for making this reproduction available to us and our readers.

I just now listened (for what must be the third time overall) to a triple reading given by Andrews, Lally, and DiPalma together at the Ear Inn in New York on November 10, 1977. DiPalma read “Exile,” “It makes of nonsense,” and “I am in the mountains,’ and also a 4-minute section from The Birthday Notations. Andrews read mostly from Moebius (published as a chapbook much later, in 1993); one of these Moebius poems became the focus of an episode of PoemTalk ("Center").  As for what Lally read that night, I'm sorry to say that PennSound's Lally page needs work; it's not clear which recording is the November '77 reading (we'll work on fixing it).

George Hartley on Stein's influence on Language poetry: Not to enclose, but to move within

I've made available a several-page excerpt from George Hartley's book on language poetry. This is the passage in which he outlines modernist influences: Dickinson, Stein, Ashbery, Williams, and Zukofsky. I chose a section that focuses particularly on Steinian and Ashberyian elements of the movement. On Stein:

Stein's importance for them appears to lie in the following qualities of her work:

1. Although her work appears to be meaningless, it does have meaning; in fact, it seems to be an exploration of the very conditions for meaning.

2. Meaning is not forwarded as something existing out in the world but as an interaction between subject and object.

3. Her work appears to operate under the assumptions of the Saussurean conception of meaning as a function of a system of difference.

4. She does not write in order to enclose (define, delimit, decipher) the world but to move within it; in other words, she does not function according to the static determinism of the noun but through the process of relationship.

5. Her foregrounding of the material side of language (sound, rhythm, syntax) is a formal analogy of the process of perception--the "movement 'spreading' from transparency . . . to the implied darkness & opacity of blindness."

Steve McCaffery, 1979: “The fight for language is a political fight.” [Source: PDF and eclipse.] 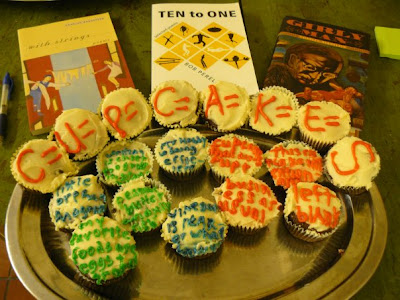