Terrence Des Pres, while writing about the holocaust

'Finish This Or Die'

Still thinking about the late Terrence Des Pres. When I first knew him (mid-’70s) he was spending time with the political poet Carolyn Forche. He finished The Survivor (a struggle, to say the very, very least) and became well known for that book (deservedly, but there was always much more to Des Pres than that book). Later, through a poem by Forche (and in many other ways, of course), I came to learn more about what kind of struggle it was for him to write The Survivor. In the poem, “Ourselves or Nothing,” Forche tells us of finding notes TDP had written to himself and, after an all-night attempt at writing, left for himself on his desk for the morning. “you will live and die / under the name of someone / who has actually died.” And another message (although not one for which Forche was present): “Finish this or die.” Here is a copy of that poem. 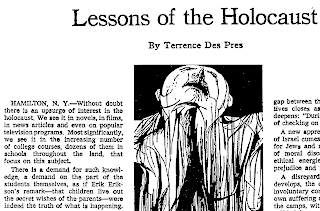 'A Sketch on Globalization & Ethnopoetics'

[The essay by Yépez following the translation, below, of Jean Louis Battre’s Portuguese poem, “The Cave,” is reposted here as a tribute and acknowledgement of the work and thought of Mexican poet Heriberto Yépez in the development of a future-facing ethnopoetics from a perspective outside the familiar US nexus. It was originally published in the radical magazine R.A.U.L. / Red Anarcho Utopista Libre in May 2012, and a related work by Yépez, “Ethnopoetics.

In the diamond at the heart of the moon

Sixty-nine notes before the US elections, part 1