One reason to be celibate is this: you can die. When you are not bound by particular loves, you are freed to love whole peoples, or places. You are freed to become a tree-sitter, say, or Óscar Romero. The great sorrow when Norman Morrison lit himself on fire outside Robert S. MacNamara’s office wasn’t the war in Vietnam, it was that his fifteen-month-old daughter had just been in his arms.

Becoming a mother or father binds us more surely to the common good, even as it tears us away. We want clean and abundant water for our children, yes, and will work for it, but if there’s just one cup left, we’re likely to steal it, too.

Julie Carr’s 100 Notes On Violence is the book of a thinker bound by particular loves. There is Ben; there is Alice; there is the baby whom her sister calls “unavailable,” “By which she seems to mean / beloved” (109). The speaker is ringed with them, “Feet like little suns,” and breathing them, “wet sky: an infant mouth on mine” (1). 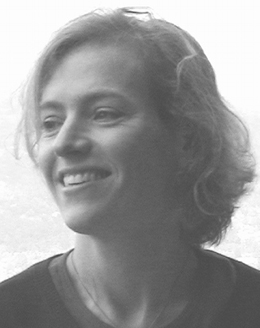 ward and away from her “wroth” and the world’s. “I’ve been thinking about what I can’t look at,” she writes (7). Seeing is joined to thinking throughout 100 Notes.

The idea is to write a book ‘about’ violence. ‘What kind?’ ‘The close-up kind. Because I cannot write the words ‘school shootings’ into the little search box (24).

But she does. And she looks.

Are we all voyeurs now? Who are we when we no longer acknowledge that some sights are too full of awe for any old glance to receive? Carr’s book invites these questions of how and when we look at others’ suffering. Too often, the practice seems to numb and inure:

there was something new: I began to see

bodies as split
under their clothes they can be torn
like paper dolls.

There was something else: I wanted to

hold my baby so that none would
hurt her (76)

Note the hopeful line break: “I began to see.” Note its grotesque fulfillment: “bodies as split.” Note that this practice of seeing does not move the speaker beyond the natural bonds of family; she wants to protect her baby, not yours. The human mass — composed, like books or dolls, of papery stuff — is general: “they,” the “materials.” The particular is what comes into urgent relief. So Carr investigates violence close to her Colorado home, and she works to bear the stories of students and friends and neighbors. Still, there is this scavenging.

“Every researcher a predator,” Carr writes (92). She proceeds about her research (and this is a poetry of it) by essaying — like Montaigne’s, Carr’s writing is “on” something — and she proceeds by lists and loops and catalogs, elision, apostrophe, quotation, collage, and fragment. The interruptions here seem as mimetic of the life of a mother, and the nature of “googling” as they do of their splintering subject.

Much is delivered in the written equivalent of a patient’s flat affect. Notes (from, for instance, Barbara Guest, or the National Child Abuse and Neglect Data System) fuel her notes. Motifs (mint leaves, notebooks, guns) reify with each repetition.

There is longing everywhere. In this note, the longing is laced with delight; it soothes like a sleep-charm:

Lie down little girl, little laugher, little clown
couchwise or in the sea

Sometimes, as though she must usher children through a menacing place, and it is up to her to make of it a lullaby or game, Carr sings:

Often, though, the reality recorded is one of beauty both sublime and ordinary; there are pools, and birthday parties, and kneaded bread. “Sun on rooftops. Sun in blue. Hissy happy foam” (74). But what troubles the skin of such hours, and what seems more real—the “Aryan Defense League,” the “Confederate Hammerskins,” the inventory at “Gunaccessories.com”(13, 15)—is often unreal in the old sense of reality as something experienced. When the speaker’s days are separated from her drip, she gets nervous: “Where’s my plug-in? Where’s my piece of charge? My grid?” (53)

Carr writes from a post-post-world, which is our world, where you can drive to “the Nature Store” (10). Even the good one means to do (re: buy) is violent, and violence, or the possibility of violence, constitutes an atmosphere. It is harrowing: there are the meth addict’s starving children, left to eat wallpaper glue. It is epic: “Korea, Iraq, Beirut” (95). It is domestic: “A family had a special anger room, a room to sit in and count” (94). It is done by words, and by various and inventive means like “motorcycle torture.” It is dreamt; it is funny; it is plain bad luck. Spills and mishaps result in violence. Bodies are maps of places to suffer violence, “whereas my vagina. whereas my nipples. whereas my eyes” (74). Behind each scene sits its specter: “My girl climbs a tree: a man in a car watches her” (27).

Even what would seem innocent is duplicitous. Pushing one’s face “into the air beside the river” does violence to “that broken cold air” (11). The book’s opening declaration, “It won’t snow again—it won’t,” is as much a mid-March celebration as it is our warming age’s lament (1).

Violence—like love, or God in others’ accountings—is over and in all:

what is violence? the narrowest hinge between lovers and lamps?
trashcans and trains? music and muscle? (35)

It is a hinge; it is the hinge (of tones and notes), opening only onto itself. Imagining a graceful exit by suicide, if illness were to make her a “great pain to others,” Carr is stymied because she’s read the studies of the violence this violence does to the children of the dead (101).

The completeness of this vision can be devastating and convincing, but sometimes this reader was reminded of her stint in a book group with a Marxist—was it all class struggle, really? Every last story?

Here, yes. Like suffering in the first noble truth of Buddhism, life is violence, the truth of violence, violence exists (and other translations). Wisely, Carr implicates all of us in all of it. But there seems no way to conquer violence. To try to do so is cute, or impotent, sentimental, or naïve:

We’re trapped. Prayerful hopes are likely panicked wishes: “Dear child, // simple, simple, easy, easy, quiet, quiet, still” (19). And “There is no place outside the world" (27). What light there is is “frail” and sabotaged:

A secret camera take a poll. Frail stars spill into the dark (12).

“Violence,” Carr writes, “is everywhere” (48).  When, from a porch, on an early fall evening, watching their children and their children’s friends play, her husband questions her assertion, they are soon interrupted by two strangers asking, “Have you seen a body? … [I]n a garbage bag?” Carr’s repeated response is: “Go away" (48).

One response to violence is that. Another is to turn off the news.

What if a death in your neighborhood were the only gruesome story you’d heard this week? What would now be irresponsible civic behavior—what, you’re not following the floods in Pakistan?—was how people lived. And there are hopeful possibilities in being so provincial. The scale is human. You could know and name and grieve the dead. You could walk with the searchers; you could bury the flesh. But these Notes aren’t from a world that can be reeled back or turned off. And—bound by love—they aren’t from a world that is easy to leave.

Is art an antidote to the violence Carr records? Is mothering?

“There’s the useful mother and the useless one,” Carr writes (15). Most of the women on death row, she notes, are there for murdering children. In a section where Carr and the speaker are conflated we read, “Even the man who climbed into my window and came very close to raping me did not hurt me so much as my mother did when she said she hated me” (83). Mothers are not necessarily harbors, then.

So what about words? Carr has built a “cupboard” of them (103). They seem least able to overcome or escape their subject when they are most moored to common usage and what we call “sense.” They are best able to make a way to an un-obliterating hour or world, when they’ve been marred, or played prestissimo, or translated back into barbarous sound. Yes: the logic we sufferers need is sonic. The poem’s words begin to point us out and elsewhere, when, if those same words were typed into a search engine, they’d be returned with more customary suggestions or alternate spellings, and when, if heard in a business meeting, in some vastly carpeted place, they would seem like some sort of “break.”

It’s living. It’s breathing. This horse, this horse. It will not shoot you. Ride.