The moment I sat down to write this response to Erin Wunker’s talk “Technological Subjects: Framing McLuhan in the Twenty-First Century” delivered at the November 2014 Avant Canada conference, I caught myself beginning by half-consciously composing tweets instead of carefully crafted, scholarly sentences: “wishes she could time travel back to nov. ’14 as she reads @erinwunker’s provocative piece on McLuhan & social media.”

Your tweets, now with more poetry

Ever wonder what tweets would look like remixed into poetic form? This question, which few people were probably asking, is the premise behind the application Poetweet. Simply type in a Twitter handle, choose between sonnet, rondel, or indriso, and the application generates a poem.

For many Internet users, social media constitutes the extent of their regular textual encounters. As a result, Web 2.0 platforms are increasingly becoming spaces that facilitate expressions of imagination and the processing of human experience. Hashtags on Twitter - # and word combinations that link 140-character messages called tweets - trend regularly on the site, reflecting the most popular topics identified by the platform’s algorithm. Those who use hashtags may tweet for a range of reasons, from participating in flash-in-the-pan controversies over the color of a dress to weaponized hashtags linked to ongoing protest movements like #BlackLivesMatter. Are tweets simply expressions of the Internet's id or might we find among them some of Percy Bysshe Shelley’s “unacknowledged legislators of the world”— poets?

Whose speech? Who speaks?

Over on the Poetry Foundation, The Harriet Blog has a write up of my recent post on Vanessa Place’s “White Out” of Gone with the Wind. The Harriet Blog also notes Place’s current retyping of the novel on Twitter, and Brian Reed’s discussion of Place’s “Miss Scarlett” (also an iteration of Gone with the Wind). In a recent talk (which you can watch here), I discussed the relationship between Place’s “White Out” and “Miss Scarlett.” I read “Miss Scarlett” somewhat differently from Reed, as I outline below.

In “Miss Scarlett,” Place appropriates Gone with the Wind in a more overtly discomforting way than in her “White Out”:

Let’s note (with Brian Reed) that a poem like “Miss Scarlett” is written for our digital world of searchable copies. Because of these digital copies, readers can type a phrase into Google and quickly locate the source text: in this case, all the words spoken the maid Prissy in a section of Gone with the Wind.

A poet in a serious discussion yesterday used the example of 140 characters as a constraint-based poetics. He was talking about haiku, natch

The tweet in itself was precisely 140 characters. Here in the relatively spacious J2 textbox, though, it seems so bare, so minimal. In the twitter format I use (the application called “Tweetie”) the full 140-character update fills the space and makes me feel downright loquacious. These new media really are our messages. You'd think I'd have discovered this before now.

The site called Mashable / Social Media ran a story a while back with the news of "hotseat," which is being adopted at universities such as Purdue. I quote: 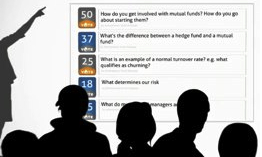 Students at Purdue University are experimenting with a new application developed at the school called Hotseat that integrates Facebook, Twitter, and text messaging to help students “backchannel” during class. People who have attended technology conferences in the past several years are already familiar with this phenomenon, where social media is leveraged to allow the participants in a session or panel to comment and exchange questions and ideas in real-time. At Purdue, Hotseat is used to allow students to comment on the class as it proceeds, with everyone in the class including the professor able to see the messaging as it happens. The Hotseat software allows students to use either Facebook, Twitter, Myspace (MySpace), or SMS to post messages during classes, or they can simply log in to the web site to post to and view the ongoing backchannel. Right now it’s only being pilot tested in two courses, but has already become a fast favorite for both teachers and students. Professor Sugato Chakravarty, whose personal finance course is one of the pilot tests, said, “I’m seeing students interact more with the course and ask relevant questions.” And although it’s been optional for students to participate, so far 73% of the 600 or so in the pilot classes have used the software. We’ve seen Twitter become mandatory for journalism students at Australia (Australia)’s Griffith University to some negative reaction, but this is a less structured implementation which may perhaps account for its more favorable reception. As Chakravarty goes on to note, though, the application is called “Hotseat” for a reason — and professors will have to be resilient enough to take any potential criticism or even corrections from students in real-time. Nevertheless, he cites it as a “valuable tool for enhancing learning. The students are engaged in the discussions and, for the most part, they are asking relevant questions.”

My first response was extremely negative: just another use of so-called social media to enable universities to continue rostering huge courses (which is obviously a money-saver). I certainly won't celebrate yet another reason why class size will continue to grow and the distance between faculty and student will increase. But then I realize that the distance I'm thinking of is physical. Programs like Hotseat will tend to make the lecture impossible to maintain, if (for instance) students are not understanding the material, if they have questions they feel the need to pose but can't otherwise break into

the competent super-confident flow of a lecture. So this might shake up some lecturers a bit, might cause them to revise their yellowed lecture notes, and to look up at the tweetflow on the monitor behind them. Well, then, back to skepticism. Do we really need students' tweets projected in the front of the classroom? Can't we all learn, even in large classes, to ask questions, encourage students to speak, lead a real discussion? If a Hotseat-enabled tweet from the otherwise reticent student in row 26 then makes possible an interaction "outside" the social media--if this system becomes a prompt--then I'm fine with it. If it's just another excuse for pedagogical impersonality (not to mention I know/you don't antagonism between teacher and learners), then I'll sit this one out. I'll just repeat what I've written in this blog any number of times. My pedagogy is saturated with uses of digital media and IT (I'm downright gaga about it all), but my classroom itself--the space for our meetings--is for the most part pre-tech: the students and I in the space. Not always, but often, my classroom is the only tech-free experience my students and I will have all day. 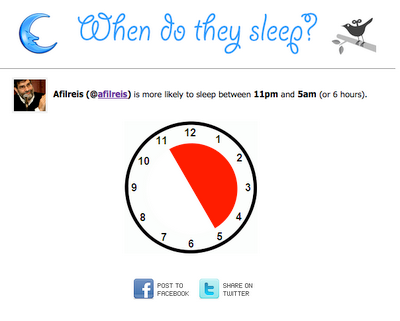 Some automated app gimic scans your tweets and then tells you when you typically sleep. It also assumes that when you sleep you don't tweet. I assume that's a fair assumption in 2010, but I doubt such for 2015. Anyway, of course it also presupposes that when you are awake you are tweeting. Quite a premise, no doubt self-serving. 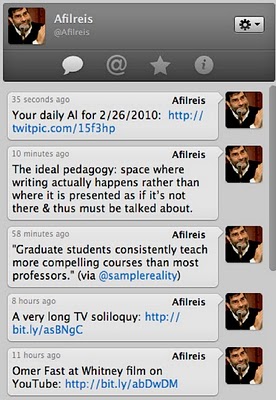