Tamburlaine’s counselors observe the inefficiency of the play’s language and try to correct it. “You must devise some torment worse, my lord,” Techelles offers, “to make these captives rein their lavish tongues” (Tamburlaine, Part 1, 4.2.66-67). Techelles has a point. The efficient political solution would be the destruction of Tamburlaine’s enemies. Recall Bajazeth’s preferred solution: “First thou shalt rip my bowels with thy sword . . .” (4.1.16). He will be a footstool only when Tamburlaine has him killed and fabricates a useful object from his skeleton.

This is not a solution about which Tamburlaine ordinarily has any scruples. In Part 1, Marlowe dramatizes this solution in Tamburlaine’s unflinching destruction of the city of Damascus, starting with the slaughter of four virgins (“O, pity us!” “Away with them, I say, and show them Death!” [5.1.119-20]); in Part 2, in Tamburlaine’s murder of his son Calyphas.

That would be one way of handling the problem of Bajazeth. A less efficient but equally effective solution would be to use brute strength to enforce Bajazeth’s unfree status. Punish his body. Take away his voice. Teach him the consequences of disobedience. Curiously, Tamburlaine is far less disciplined in handling his enemy emperor than in handling enemy towns. For although he threatens to have Bajazeth torn to pieces, which he fancifully compares to shavings from a cedar tree struck by a thunderbolt, the threat is empty. He has no intention of doing any such thing. Why does he make so many allowances for the eccentricities of his furniture? “My lord,” Queen Zenocrate wonders, “how can you suffer these outrageous curses by these slaves of yours?” (Part 1, 4.4.26-27).

Tamburlaine’s answer is instructive. “I glory in the curses of my foes” (4.4.29). He wants the footstool to be a living, conscious, willful man. He wants him to have a voice. He wants to hear his curses. He wants to step on his back — an emperor’s back — while he resists. The political point of the command was never to conquer the object’s resistance. The point is for the object and the speaker to hear the command and the curse over and over. 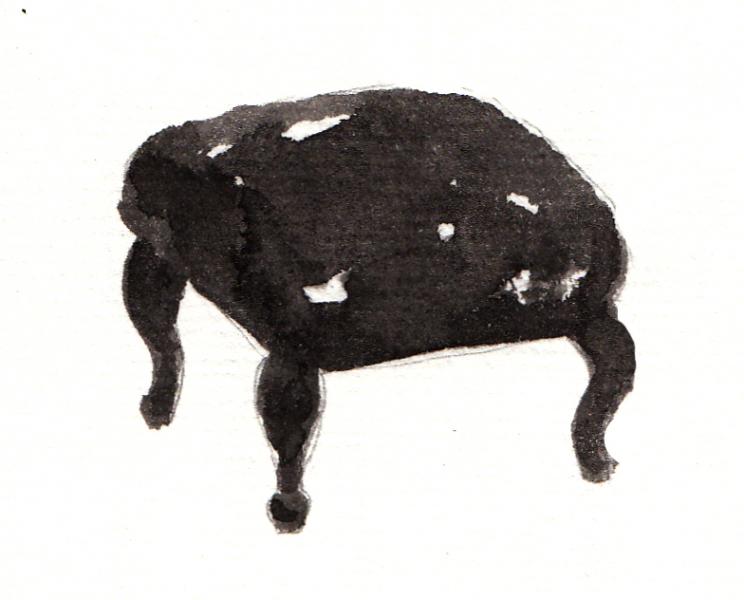 The political point has a dramaturgical explanation. Marlowe’s theater typically uses sonorous diction and extravagant imagery to create action and spectacle. All of Marlowe’s readers must confront this tendency eventually. As Harry Levin succinctly puts it, “Driven by an impetus towards infinity and faced with the limitations of the stage, the basic convention of Marlovian drama is to take the word for the deed” (Christopher Marlowe: The Overreacher [Faber, 1965], 62). Important elements of drama are narrated, but not quite in the manner of Greek chorus or Shakespearean soliloquy. A peculiar sort of dialogue sets lyric utterances against one another.

Think of the psychomachia in Faustus.

— Settle thy studies, Faustus, and begin

To sound the depth of that thou wilt profess.

These commands are spoken by the Good Angel, the Bad Angel, and Faustus, each one a different aspect of the same character. Three actors appear onstage to represent a single voice talking to itself, translating action into lyric utterance, and fragmenting lyric into dialogue.

The scene in Vatican City is more complicated, because there are three distinct characters, two of whom believe themselves to be the one and only pope. The dramaturgy, however, is the same. Adrian declares his papal state by loading his entrance with commands — first directed to his retainer, then to his furniture, and finally to himself. When Tamburlaine ascends the throne, he and Bajazeth trade impossible commands: Bajazeth tells the “dread god of hell” to make the earth swallow both kings, and Tamburlaine calls on some of the stars to outshine other stars (4.2.27, 33-34). Psychologically, the effect may be compared to that of whistling a sprightly tune on a walk through an unfamiliar neighborhood. You are announcing your presence and your nonchalance to the residents, and convincing yourself that you exist. Here I am. Listen to my soundtrack. Come inside my head where that tune is always playing.

According to the enigmatic pronouncements of Allen Grossman’s Summa Lyrica, lyricism is an ideal special effect for showing majesty.

In the lyric ‘space of appearance,’ all being is celebratory. . . . The speaker in lyric has mastered the process of manifestation, and endured the tragic losses which manifestation entails, without being destroyed. The speaker in lyric has not lost heart. To go on speaking, not to lose heart, is an occasion of celebration and an attribute of majesty.

In the story that Grossman tells, all people were originally invisible. Early civilizations developed poetry as a technique for making special people, kings, visible. As a result, almost anything that appears in a poem looks more or less like a king. For modern poets with democratic ambitions, the tendency of poetic language to multiply images of kings might sound like a problem. For Marlowe, it sounds like the solution to a problem.

At least, Levin makes it sound like a solution. According to Levin, Marlowe uses poetic language as a compensatory mechanism reconciling “an impetus towards infinity” with “the limitations of the stage.” This formula echoes Barabas’s entrance in The Jew of Malta, which takes the form of an impossible command addressed to his wealth: “Give me,” he says, carriers of wealth with greater value than gold pieces, so as to “enclose/ Infinite riches in a little room” (1.1.19, 36-37), and obviate scenic representation. Elsewhere Levin expresses his appreciation for this line, remarking that “nothing could be more Marlovian. . . . It is hard to imagine how a larger amount of implication could be more compactly ordered within a single pentameter” (The Overreacher, 87).

To Tamburlaine’s political advisors, poetry seems to be a needless expenditure; to a literary critic (putting aside the rarity of Marlowe’s genius, even in the cultural flowering of the Elizabethan period), it seems a thrifty allocation of resources. On a practically bare stage, using only human voices, Marlowe shows infinite wealth and absolute power. Very economical.

Jonathan Goldberg has a different interpretation of this tendency. In a reading of Edward II, Goldberg highlights a speech by Gaveston that “defines in advance precisely the kind of theatricalization Edward II will not offer” (Sodometries [Stanford, 1992], 115).  Gaveston imagines seducing Edward by producing entertainments in which boys wear women’s clothing, playing on the fears of Puritan antitheatrical writers, and anticipating the hopes of some modern readers, for the effects of this Elizabethan stage convention. However, Goldberg points out, Gaveston seduces Edward using his own body and voice, without transvestite performers, and in fact without professional entertainers of any kind. Gaveston does not need to wear a dress in order to become sexually interesting to Edward.

What if this interpretation — lyricism undone by performance — were the model for Marlowe’s dramaturgy? Rather than constituting action, the speeches would be fictions even within the fiction of the play, providing a view into a world distinct from the scene in which they are spoken. This is how the impossible commands seem to work in one of Marlowe’s most celebrated set-pieces, Faustus’s descent into hell. As the time of his spiritual contract runs out, Faustus calls on all the stars to stand still, for the sun to “make/ Perpetual day,” and for his body to be sublimated into a cloud. As though Faustus’s wishes to slow time have the effect of making it run faster, an hour passes before he has finished reciting a speech of fewer than sixty lines (with more of the lines spoken before the clock strikes the half-hour than after).

Because Faustus’s desires are impossible and because they keep changing, Stephen Greenblatt concludes that they are ultimately objectless: “Faustus speaks endlessly of his appetite, his desire to be glutted, ravished, consumed, but what is it exactly that he wants?” (Renaissance Self-Fashioning [Chicago, 1980], 217). It’s true that Faustus is rarely satisfied with what he gets, but Greenblatt’s question only makes sense if Faustus is allowed to want exactly one thing. I assume that Faustus wants everything that he says he wants — in other words, he wants to see the stars stand still, and he wants to experience being a cloud — and is not obligated to seek a common principle unifying his desires. The objects Faustus wants are easy to grasp, starting with this one:

I’ll have them fill the public schools with silk,

Wherewith the students shall be bravely clad.

I work in a school myself, and can testify that it would be cool to have the entire campus wrapped in layers of silk like a Christo and Jeanne-Claude project. I would also appreciate new kimonos for the students and faculty to wear as uniforms. Is it really necessary to explain these desires?

Everyone onstage looks like a king, even the furniture, because everyone onstage, including the furniture, is voicing wildly unreasonable commands. The shape of the political hierarchy finally depends on dramaturgy. (Which of the incompatible verbal cues do you follow? One can imagine stagings of Faustus in which Adrian defiantly asserts his ascension from beneath the foot of the Elector of Saxony, or stagings of Tamburlaine in which which Bajazeth makes Tamburlaine his eunuch, or in which the mouth of hell swallows both of them.) The problem lies not in determining what the characters want, since their desires are spoken in “high astounding terms” (Tamburlaine, Part 1, prologue), but in conforming them to what others want, since they tend to view one another as objects of desire, instruments that will help them get what they want, or obstacles. Only in Hero and Leander does Marlowe suggest “mutual appetence” even as a possibility (2.56).

Next: the character of a small poet.

[Thanks to David Scher for the images.] 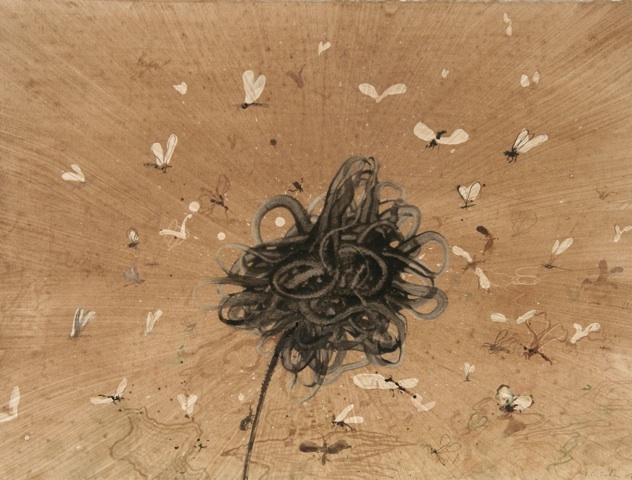