Into motions and relations: Metonic cycles with Myung Mi Kim

“Lamenta,” the longest series in Myung Mi Kim’s fourth collection, Commons (2002), is structured after the metonic cycle, a calendrical unit of nineteen years. A lunisolar measure, the metonic cycle encapsulates the notions of simultaneity, equivalence, and difference. It is the “period of whole days over which the visible lunar and solar periods almost resynchronize” (Dictionary of Weights and Measures). This re-synchronization suggests a confluence between two different measures of time, which can be identified without subsuming one order of measure into the other. Importantly, there is a remainder when these two cycles nearly meet: “the difference between the 236 synodic months and 19 mean tropical years is barely two hours.” A portion always exceeds.

“Lamenta” is organized into five sections, each one dated to measure 19 days. For example, the first section is subtitled “229 / 318,” indicating the span of composition between February 29th and March 18th. In total, there are 45 discrete units that make up the poem — mirroring Kim's age when Commons was published. While she was still developing this poem, Kim stated that she had modified the metonic cycle so that 19 years became 19 days instead (listen to this reading at PennSOUND here). Her reasoning for doing so was one of duration: how many cycles of 19 are available to a human life?

The text of “Lamenta” incorporates fragmented lists, dictionary definitions, romanizations of Korean hangul, and excerpts from historical texts. Kim's mixage of these materials in this series indicates her interest in exploring what constitutes knowledge, in particular attending to what lies just beyond its stated limits. For example, texts that are conventionally considered authoritative, such as a dictionary definition, take on new relevance in a different space. In a poetic space, the various meanings for “mite,” for example, as “a copper coin of very small value,” “a small weight” and “a minute particle or portion” encourages us to recognize the word's historic traversals, which continue to inflect its current meaning. Furthermore, something else exceeds its definitional inclusion, due to the simultaneity, equivalance, and difference invoked by Kim's orchestration of the lines. This difference, excess, or remainder constitutes the field of Kim’s poetry. 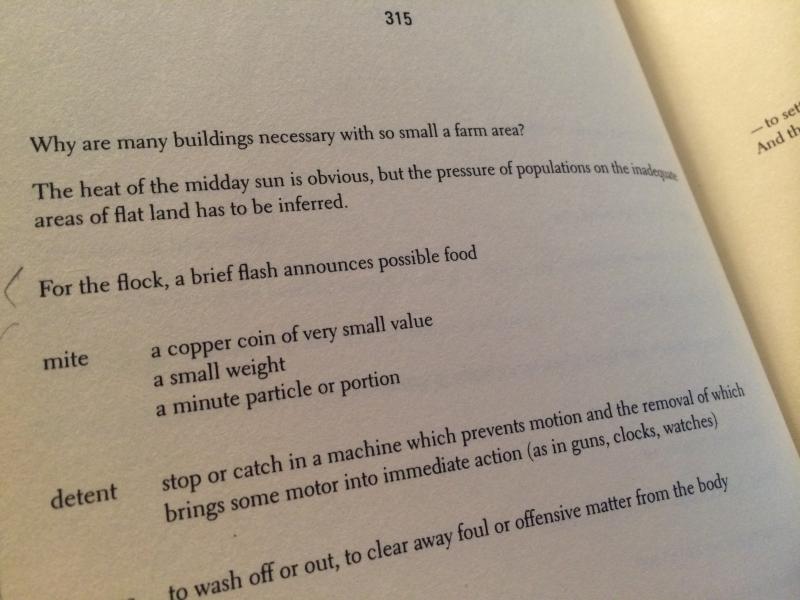 There are many things I can say about the genius of “Lamenta” and the way it speaks to our imagination of time, but I‘ll close with this comment: by removing standard markers in the way she noted her dates (how does one recognize 229 and 318), Kim encourages the poem's engagement with time to disappear beneath our interest as readers in the substance of her language. Time is rendered strange and invisible to us. This is an incredibly resonant gesture — given Kim's recognition for how our understanding of time as history has grave consequences for how we continue to structure knowledge and who gets to wield power in the world. The erasure of a tiny mark — in this case, the / which would clarify 229 and 318 as 2/29 and 3/18 for us--obfuscates the contributory power of these marks for understanding the broader schema of “Lamenta.” Its absence illustrates the central role that “minor” elements play in our ability to make sense of the world. To couch this in a discussion of time — what has history erased, removed, or forgotten, and how does this absence affect or obscure our ability to comprehend how we live now?

As a writer chiefly concerned with creating spaces for difference, Kim’s invocation of the metonic cycle in “Lamenta” gestures towards the structures of knowledge production, inviting us to re-order them into equivalent relations. What could possibly structure our notion of the world more strongly than our sense of time? Across cultures and eras, solar and lunar cycles outline human imaginations.

Note: the image above is a schematic of the back of the Antikythera mechanism, an ancient analog computer designed to predict solar and lunar eclipses. It leads me to ask: what systems indicate the ways we imagine the future, and how may language enter and disrupt this equation...

I'm titling my Commentaries series TIME TEXT BODY NOISE in order to capture some central questions I've been investigating regarding how we experience and imagine time when we read, watch, and hear poetry happen. These considerations are part of my broader efforts to make sense of time as a technology, and how we understand and imagine it--especially "the future." I suspect that our experiences and imaginations of time are not wholly native to us. Hopefully, my posts will help me understand these phenomena better. May they also cast some new light on how you experience and think about time, texts, bodies, and noise, too.

I live in Philadelphia, PA, where I edit  Corollary Press, a chapbook series devoted to innovative multi-ethnic writing. Through Corollary, I've released work by authors such as Bhanu Kapil, Douglas Kearney, Craig Santos Perez, Lynn Xu, Carlos Soto Roman, Jai Arun Ravine, and several others. All the books are handsewn and run in intimate editions of 150.

I'm also a 2013 Pew Fellow in the Arts for Literature.

For a living, I teach freshman composition and creative writing at the University of the Arts and at Richard Stockton College in New Jersey. I also work for the Consortium of Asian American Theaters and Artists (CAATA) as a coordinator for the 4th National Asian American Theater Conference and Festival.

I've had several collections of my work published--my poetry books include That Gorgeous Feeling, Underground National, and  Solar Maximum (forthcoming from Future Poem in 2015), in addition to a bunch of chapbooks I adore.

I was enrolled for many years as a doctoral candidate in English at Temple University, but decided to leave without defending. While there, I was also a fellow at the Institute for the Study of Race and Social Thought (headed by Lewis R. Gordon) and at the Center for Humanities. My dissertation explored social space and Asian American experimental poetics. Before that, I received an MFA in poetry from the University of Massachusetts at Amherst, where I also completed a Certificate in Advanced Feminist Studies.

For a comprehensive list of my publications, actitivities, and to check out my personal blog, you can visit my website: silentbroadcast.