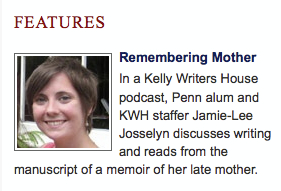 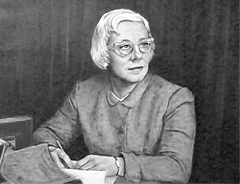 Dean of Penn's College for Women in 1960. Oh, the problems of separatism. Click here for more.

down the line from Williams and Pound 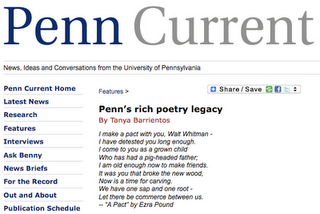 The Pennsylvania Current is now running a story about the legacy of poetry at Penn: "Penn’s rich poetry legacy," by Tanya Barrientos. It features a nice mention of the Kelly Writers House and of PennSound. 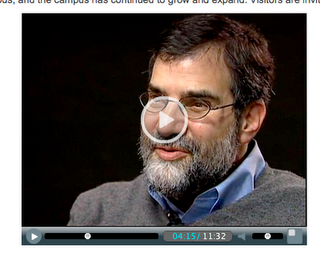 Some innovative IT colleagues of mine here at Penn have made a short film about our use of the virtual world "Second Life" here. They interviewed me for it, but I'm not nearly the most lucid proponent of experimenting in SL. Watch for others.

In 1998 Jerre Mangione passed away. Jerre had been on the faculty of English at Penn since the early sixties, and retired perhaps a year or two after I arrived in '85. Because of his involvement in the 1930s as a young administrator in the Federal Writers' Project, I sought him out, lunched with him, interviewed him, and came to admire him. I read his novels and of course studied his history of the FWP, The Dream and the Deal.

In late spring/summer 2001 Jim O'Neil, then the higher education beat reporter for the Philadelphia Inquirer, interviewed me at length for a story about my electronic pedagogy. The essay would appear in the (now defunct) Inquirer Sunday Magazine in August of '01. In '99 and '00 I had taught three all-online versions of my modern & contemporary American poetry course, English 88. And I had for years been using chat rooms (the earliest was a MOO called PennMOO) and listservs to enable the students' discussion to be the central activity of the course. The six-year-old piece seems a bit quaint to me now, and Jim's focus (in several middle paragraphs) on my life and "development" as a teacher is a bit embarrassing, but the narrative is more or less right. Here's a passage from the essay, starting with the end of the biographical stuff:

In the early 1980s, while pursuing his doctorate in English at the University of Virginia, Filreis began to teach. At the time, the university purchased early-version desktop computers. "They were big white machines, in the shape of a huge space helmet," Filreis said. "They ran a word processor program called Magic Wand."

Filreis stored set pieces on computer, each describing a common student writing mistake. He gave each set piece a number. Then, marking student papers by hand, he put a number in the margin near each mistake, and attached the appropriate computer-generated commentary.

"This changed my relationship with the students," Filreis said. "I wanted to engage the students in a conversation." In effect, he had created a low-tech prototype of the teaching style he would later refine. He calls it "dialogic pedagogy."

When e-mail and the Internet appeared, Filreis, who arrived at Penn in 1985, easily integrated these new tools. The core of that teaching philosophy mirrors the course material of English 88.

Postmodernist poets focused on the process of their poetry, rather than on what the words in their poems actually said. The purpose was to make poetry and language new again. 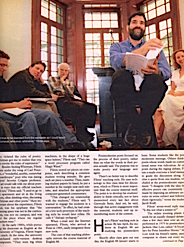 There's no better way to describe Filreis' teaching style. He uses technology to free class time for discussion, which to Filreis is more important than the course material itself. The point is to develop his students' ability to think critically, not to have memorized every last fact about Gertrude Stein. And yet, he said, through that active engagement with the material, students end up remembering more of the content.

Here's Filreis' teaching style in action: By late April, the students in English 88 are studying the postmodern poets.

Shortly after class gets out one day, the English 88 listserv starts to hum. Some students like the postmodernist message. Others think a poem whose words made no conventional sense was ridiculous. At one point during the raging debate, Filreis e-mails everyone a brief message to guide the discussion along. He cites a quote from one student, who chafed at the postmodernist experiment: "I disagree with the idea that effective poetry can consistently be made by imposing an arbitrary set of rules on some subject and following them rigorously," wrote the student, Jacob Kraft.

Filreis' seven-word reply reads: "Is this not what a sonnet is?"The online jousting plants the seeds for an equally charged debate in class a few days later over an elegy performed in 1975 by postmodernist Jackson Mac Low, called "A Vocabulary for Peter Innisfree Moore". Mac Low took his friend's name, used a computer to churn out every word that could be constructed from reshuffling the letters of the name, and then got friends to read those 960 words aloud in a staged performance. The work generates intense give-and-take among the students on whether old-fashioned elegies did justice to the dead.

"Who's to say words can capture the essence of a human being?" says Laine McDonnell. "Who's to say these words of Mac Low's don't capture his friend more?" "Aesthetically, it leaves a lot to be desired," pipes up Jake Kraft. "The postmodernists are only interested in the process. They throw aesthetics out the window."

Now that Filreis has broken down the walls of the classroom, he wants to break through all other confines of the university setting. "I want to start recruiting 'teachers' from the extended Penn community," he said, clearly thinking back to Carl Peterson's influence on him at Colgate. "I want more electronic mentoring. I want to deepen the experiment. I'd love to be liberated from the semester so I could teach whomever, wherever, whenever."

Thanks to technology, he has already liberated himself. He has created a program through which faculty can mentor incoming freshmen over the Internet before they even get to campus. He has cajoled some faculty to participate in online book groups for Penn alumni. And his own Web site — which registered more than 2.6 million hits in the last six months and includes extensive resources on modern poetry, the 1950s and the Holocaust — has become a helpful tool for high-school teachers nationwide.

Filreis is one of a small but growing cadre of professors across the country who are changing classroom pedagogy — and not merely by turning the old-fashioned lecture into a glitzy PowerPoint presentation. Many colleges provide grants and training for professors interested in using the new technology, and on every college campus there's at least one professor harnessing the basic technology of the Internet to free class time for richer, student-driven discussion.

The whole essay can be found here.

Poetry in the mountains 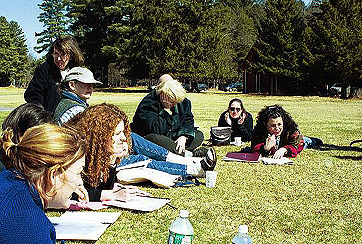 Each year for five years now I and a group of 20 or so Penn alumni have spent three days and two nights at the Straus estate at Frost Valley in the Catskills, studying and discussing modern and contemporary American poetry. And each year a poet — whose work we read — joins us.

Writing actually as works of art 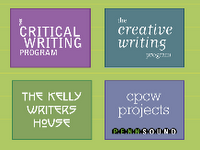 The Modern Language Association conference was held in Philadelphia last December (’06) and, as usual, the local newspaper feels obliged to cover it. Usually such stories devote most of the space to mockery at arcane, whacky paper topics and seem inevitably to have a jokey, anti-PC, antiacademic tone: how silly, all this.