Mark Liberman, a computational linguist who directs the Linguistic Data Consortium at the University of Pennsylvania, has been fascinated, especially in recent years, with experimental poetry. You can find his ideas and experiments at Language Log. He's been working on Stein's repetitions.

That Taggart pursues meditative stamina in words approximating a drone for the verbal field is well known. That he has made sacramental use of the performed word is also acknowledged. There Are Birds does something else, however, even as it again realizes Taggart’s Objectivist scruple. 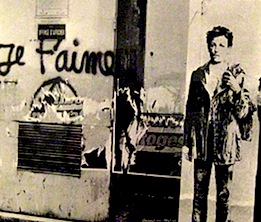 a letter is solidarity
Charles Bernstein
Several months ago a group of American poets  signed a letter in solidarity with jailed Iranian poets. In the meantime, the Iranian Writers Action Committee, a new organization, has been set up by Iranians outside the country. They have compiled an extensive list of writers who are in danger. You will find Behanz Amani on this list. Our initial letter was not designed to get media attention in the U.S.