In Albee's "Who's Afraid of Virginia Woolf?"

I've been re-reading Who's Afraid of Virginia Woolf? and co-leading a month-long discussion online with a few dozen adults. We discuss every aspect of the play by email. Lots of fun. As anyone who knows the play will remember, George and Martha play a series of always slightly varied games with each other. These are games played to vary the relationship (in part to create sexual excitement through, for instance, role-changing) but also as a means of altering the power dynamic between them. (George married Martha in part because her father is the president of the college where he is a not very successful history professor. So she's got the power but he shifts rules of the games they play in order to challenge those positions; she often likes the rule-shifting because it shows some evidence that George is not entirely flaccid.

So our group was talking about the elaborate games in this play, and I decided to explore the possible connection between what Albee is doing here in this 1962 work and the Cold War rage for game theory. Here is what I wrote to the group this morning: 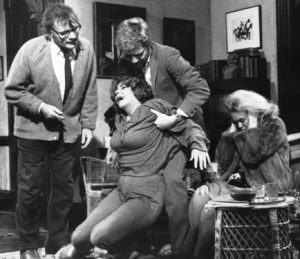 Game theory developed rapidly and quite publicly in the period when Albee was first writing plays - in the late 60s. It reached its peak in the early 50s. Gamesmanship, following from militarily-applied gaming scenarios, is largely credited for the White House strategy in dealing with the Cuban missile crisis in the fall of 1962. (Our play was written earlier and produced before the crisis in October that year, but audiences throughout that period would have been quite aware of cold-war versions of gaming as Martha and George engaged in their personal power struggles through ever-varying game scenarios.)

The way George and Martha interact - stepped up, psychological 'warfare'-style games whose rules shift ever more at the brink of danger - has always reminded me of Mutual Assured Destruction (MAD). This balance required open acknowledgment of each side's strengths and vulnerabilities. However, as "prisoner's dilemma" showed us, both players must assume the other is only concerned with self-interest; therefore, each must limit risk by adopting a dominant strategy.