Craig Saper: Something more intimate to what is called thinking

When we at the Writers House brought Craig Saper back to Penn in 2001 to give a talk about Fluxus, some of us attended because we are fascinated by Fluxus and really admire Craig’s way of discussing such art. A few Writers House regulars came in spite of not having experienced Saper’s brilliance at first hand, but because it was known around the House that he had praised KWH as a learning community (see below). Others came because they still by then lamented the loss of Craig from the Penn faculty (by denial of tenure). On that occasion Joshua Schuster — he was by then a grad student but he'd known Saper from his days as an undergrad too — gave a fine introduction. Here is that introduction, in its entirety:

I have this vision stuck in my head of Craig Saper, at the University of Pennsylvania, in 1996, pulling up an essay by Walter Benjamin and reading: “I am unpacking my library. Yes, I am.” It was a storybook beginning to a storybook class. We were confronted from the outset that there was a crises in criticism and that we were going to have to invent our way out of it. At stake was a way both in and out of criticism itself. Benjamin was a model; that the act of unpacking one’s library could be the very model for a form of scholarship and knowledge. Where else could we find models? With adrenaline and a hallucinatory focus, and perhaps anything could serve as the conceptual apparatus from which to generate new ways of thinking. How can an event be a model of thought? How do you think a handshake or a barricade or a letter being passed through a postal system? All that is solid melts into air-there, capital in its own act of disguise was exposed as a model for new ways of thinking. Or a telephone call, that brings one to the question of what is called thinking? Or to take tonight’s topic Fluxus, the art movement, could it secretly be the code by which a university could be built anew?

Time to say a few words about the new free digital edition of The Fluxus Reader. I think I originally learned about this book through my admiration of Craig Saper, who has an essay in it. Somehow, along the way, I began an email correspondence with Ken Friedman, editor of the book. (I know Ken as a Fluxus guy, but he is also a University Distinguished Professor and Dean of the Faculty of Design at the Swinburne University of Technology in Melbourne, Australia.)

I'm glad I have my own copy of The Fluxus Reader; it has been out of print for nearly a decade and a half. In the run-up to the 50th anniversary of Fluxus in 2012, Ken has been getting requests for copies, but he doesn't have any, and he doesn't know anyone who does.  A recent Amazon search for used copies shows them running from $449 up to $2,500. 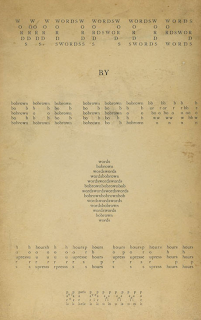 Legend: The Complete Facsimile in Context

LEGEND was written in the late 1970s by Bruce Andrews, Charles Bernstein, Ray DiPalma, Steve McCaffery, and Ron Silliman. This new editition is edited by Matthew Hofer, Michael Golston and includes a new, unpubished  collaboration by all five poets, written especially for this edition, as well an introduction of a selection of correspondence by the authors while they were writing the poems.