In a recording of a performance from Clemente Padín’s archives described by Jill Kuhnheim, Padín reads a poem to a group of schoolchildren until he reaches the line “‘este verso debe repetirse’ [this line should be repeated].”[1] Taking his own words as instruction, Padín closes the gap between the text of the poem and its performance, repeating the words again and again until one of the children exclaims “‘este verso debe culminar’ [this line should finish].”[2] Rather than an interruption of a prescripted performance, the playful, improvisatory response of the child perfectly completes Padín’s poem. For Padín, the poem exists not on the page, nor in the poet’s performance, but in the collaborative relationship between the poet and the audience. As he writes in the essay “Poetry and Participation,” “Undoubtedly every work of art or poem needs the involvement of a spectator or a reader.”[3] This audience is never passive for Padín, but always an equal cocreator necessary to the experience of the artwork or text. The poem is formed by the relationship between the performer and the audience, between the text and its reader. Never solely on the page, the poem for Padín occurs both in and as action, as the key to a social relation.

Born in 1939, Clemente Padín has become known in recent years as key figure of art, poetry, and performance since the 1960s in his native Uruguay and beyond. Primarily known for his contributions to the international mail art community, Padín has also worked at the experimental edges of contemporary poetry. Padín’s contributions to poetry range through visual, concrete, performance, and conceptual poetry, and the editorship of two influential literary journals, Los Huevos del Plata (1965–69) and Ovum 10 (1969–75), along with works of poetry criticism including the book-length study La poesía experimental latinoamericana: (1950–2000) (Latin American experimental poetry: [1950–2000]). Though each of these projects began from a place of contingency and determination, scratching out an experimental art and writing practice in the margins of Uruguayan cultural life, Padín’s consistent and prolific efforts have made him a central force in the cultural landscape of Uruguay and the international mail art scene.

Padín is preoccupied with the ways in which art is able to act in the world. For Padín, “avant-garde” resonates in both artistic and political senses — connecting experimental aesthetic practices to radical activism. As Padín insists in a 1991 essay on mail art: “The political sense of art is inseparable from its artistic sense.”[4] Following the 1973 US-assisted coup in Uruguay, Padín was arrested and tortured for his involvement in the cultural resistance to the authoritarian regime, leading to his 1977 conviction for contempt of court and derision of the armed forces. Over the previous years, Padín had shifted his efforts toward the anonymizing and decentralizing medium of mail art (partially as an attempt to skirt state censorship), mailing counterfeit postage stamps that compared the Uruguayan government to the Nazis, emphasized US involvement in the coup, and proclaimed the establishment of Uruguay as a zona militar (military zone). These efforts to bring international awareness to human rights abuses perpetrated by the government made Padín the target of the state. Following his conviction, Padín was imprisoned for two years, until an international outcry resulted in the reduction of his sentence and his release in 1979, though Padín remained under house arrest and surveillance until the fall of the dictatorship in 1984. 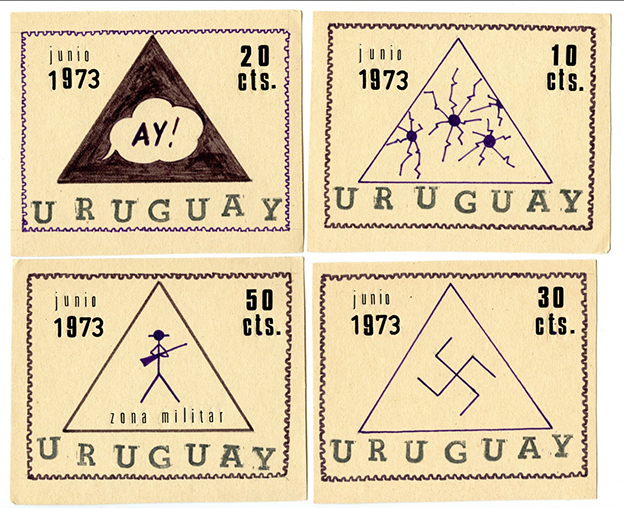 Despite his contributions to Latin American art and poetry, his work has been minimally available in English, emerging only in mail art exhibition catalogues, visual poetry anthologies, and rare small press editions. The portfolio assembled here includes three prose texts written between 1969 and 1975 that constitute the core documents of Padín’s theorization of his avant-garde poetics: “The New Poetry” (1969), “The New Poetry II” (1970), and “The Language of Action” (1975). Of these three texts, only the first has been previously published in English.[5] These short texts trace the development of what Padín calls poesía inobjetal, or “non-object poetry.” Padín borrows the term “non-object” from the Brazilian poet and critic Ferreira Gullar’s 1959 essay “Teoria do não-objeto” (“Theory of the Non-Object”), one of the key texts of the neo-concrete poetry movement in Brazil. Beginning with the impressionist painters and culminating with the works of Brazilian neo-concrete artists like Lygia Clark, Gullar traces the shift toward forms of art that “[rupture] the frame so that the work can pour out into the world.”[6] Such artworks are “non-objects” because the material art object becomes less important as the relationships, actions, and ideas that the work brings into the world become more central to what constitutes the artist’s work. Padín adapts Gullar’s ideas to develop a theory of experimental poetics that emphasizes the social and political activity of poetry, drawing on resources provided by the work of Marx, Saussure, and Émile Benveniste to extend Gullar’s ideas into the terrain of poetry. In order to cultivate a “non-object poetry,” Padín argues for the rejection of conventional poetry’s overvaluation of the signified on the grounds that the predominance of the relationship between the signifier and signified — rather than the relationship between signifiers and objects — has allowed the signified to stand in for reality. This predominance of the signified impedes concrete action against the systems of domination deployed by the forces of capitalism.

Like most manifestos, Padín’s vision for non-object poetry is programmatic and utopian in equal measure. In “The New Poetry” (1969) and “The New Poetry II” (1970), originally published in Padín’s journal Ovum 10, Padín jettisons the traditional expressive features of poetry — metaphors, symbolism, even pronouns and grammar — which he places “all in the trash” in order to argue for the foundational importance of the materiality of language. Rejecting the methodologies of past schools and strands of modernist poetics, Padín insists on a new poetics that foregrounds the poem’s status as a material object made of phonetic and visual elements. Once freed from the burden of signification, Padín argues, the poem will achieve existence through the relationship between poet and audience, equally dependent on both. Rather than convey the feelings or sentiments of an individual poet, poetry instead transmits the material elements of language — signifiers that, through their very materiality, act on reality by prompting political action. As Padín argues, “Poetry is created […] at the same level as action and not preceding it”; “Poetry is action, not thought.” Padín closes “The New Poetry II” by condemning the too-easy assimilation of new poetic modes of representation into capitalist schemas of consumerism, calling for a revolutionary struggle that extends to the level of language itself. In the third essay included here, “The Language of Action” (1975), originally published in the Brazilian journal Abertura Cultural, Padín again returns to the relationship between the producer and consumer of poetry, questioning the typical active-passive hierarchy associated with this binary schema. As Padín argues,

The aesthetic information that the artist transmits enriches the repertoire of the receiver making possible greater levels of the comprehension of reality and, in consequence, widening their possibilities of conveniently acting on reality, however it is not the work that alters reality but who consumes it — the spectator, the listener, the participant, etc.; instead, through the language of action, the artist does not only use the habitual mechanism of processing aesthetic information, according to the traditional norms — to act, exclusively, at the ideological level — but that, also in turn, the work can act directly on reality.

By pursuing aesthetic forms that stress the material, objective reality of language, Padín hopes that art will be able to develop new modes of consciousness that will in turn induce new modes of political being and liberated subjectivity.

Padín’s claims are a product of his time, both the optimism of sixties inter-American political solidarities and the radical reaction against the rise of right-wing authoritarianism in Latin America during the seventies. In joining these two strands of political activism, Padín speaks to the uneven experiences of politics in our own moment. Padín’s manifestos offer both compelling documents from a rich moment in the history of Latin American poetry and an invigorating call for a politics of a poetry capable of connecting language to action. Padín heralds the development of performance and conceptual poetries in the early 1970s, providing an alternative genealogy that looks beyond the United States to establish a wider context for developments in experimental poetry since the 1960s. In our own tumultuous moment, Padín’s texts offer a crucial reminder that while poetry is never disconnected from its political context, poetry needs to connect in order to act politically. Poetry acts politically through the relationships that poetry forms between audience and performer, between poets and readers, and between texts and the world.

[Acknowledgements: Immense gratitude to Ignacio Bajter for a crucial intervention in the introduction, and to Gerónimo Sarmiento Cruz for his enormous and indispensable assistance with the translation.]

1. Jill Kuhnheim, Beyond the Page: Poetry and Performance in Spanish America (Tuscon: University of Arizona Press, 2014), 117.

Curator Zane Koss notes that the work of Uruguayan poet and artist Clemente Padín (b. 1939) “has been minimally available in English, emerging only in mail art exhibition catalogues, visual poetry anthologies, and rare small press editions.” In this feature, Koss translates three poetics texts by Padín which outline his avant-garde practice: “The New Poetry” (1969), “The New Poetry II” (1970), and “The Language of Action” (1975). The latter two texts are published here in English for the first time.