Oil is a form of writing. I know this because I can read it in my blood, urine, and shit. As part of research for a recent book, I tested myself for a wide range of chemicals. I also had my microbiome sequenced. I found petrochemical pollution in my blood and urine in the form of pesticides, flame retardants, phthalates, and more. I discovered evidence in my gut of shifted microbial communities associated with aspects of the Western diet. I wrote about what I found in a book called Anatomic, which I will discuss in more detail in the next post. For now, however, I want to offer some context for my forthcoming commentaries, which use my own experiences as a threshold from which to consider other artistic engagements with metabolism and writing. What does it mean to think about writing in a more expanded way to include the processes and effects of hormones? How might the metabolic effects of chemicals and microbes provide models for renovated poetic forms? How can writers respond to the many ways in which the global metabolism of energy and capital is inextricably linked to the metabolism of human and nonhuman bodies?

This series of commentaries emerges out of a context of critical and creative work concerned with the cultural, political, and environmental implications of the Anthropocene — that emerging era in geological history where humans have begun to significantly affect planetary biogeochemical cycles.[1] While the term has encountered resistance from those concerned about its universalizing gesture[2] or its potential to obscure forward-looking symbiotic relationships,[3] I employ the term “Anthropocene,” like Lynn Keller, “because it is drawing the environmental humanities and the sciences together in conversations of broad social, ethical, and political importance.”[4] In particular, my approach is informed by considerations of the Anthropocene that have traced the social, political, material, and ecological effects of capitalism[5] or that have imagined emergent forms of entangled resistance.[6]

In addition, as an extended focus of the emerging critical disciplines of Environmental Humanities and Health Humanities, Energy Humanities constitutes a particularly important context for my thinking with its examination of the way energy systems have shaped cultural, political, and economic formations through history and into potential futures.[7] One of its defining characteristics, according to Boyer and Szemen, is that Energy Humanities emphasizes the necessary contribution of the arts in reimagining areas of study traditionally thought to be under the purview of the sciences.[8] The speculative nature of this overlap between art and science invites, I would propose, a consideration of experimental approaches when it comes to thinking potential forms of renovated inquiry.

We touch plastic and it touches us back. Synthetic chemicals have become part of the hormonal communication of what it means to be human. Just as the Anthropocene can be defined as evidence of human imprint in the fossil record (a new form of rock, Plastiglomerate, has recently been identified), so too can it be defined by the increasing presence of synthetic chemicals in our blood and fat, affecting hormones and potentially damaging DNA, the genetic archive of human evolutionary inheritance.[9] These chemicals “interfere with signalling and other biological processes,” Bruce Lourie and Rick Smith illustrate in Toxin Toxout.[10] Such metabolic interventions perpetrated by these “endocrine disruptors,” or hormone mimics, emphasize the semiotic nature of biological processes.

The biosemiotic effects of endocrine-disrupting petrochemicals and anthropogenically-inflected microbial communities, I propose, constitute an emerging focus for literary practice and critical analysis, especially through the lens of new materialisms, ecopoetics,[11] and ecocriticism. Biosemiotics is an emerging field in theoretical biology that studies the communicative dynamics between organisms and their environment as well as the interpretive interactions within organisms at the endocrine, immunological, and reproductive system levels. By studying the signifying environments of organisms and the internal endosemiotic environments at the molecular level, biosemiotics emphasizes the importance of the semiosphere, which, as Jesper Hoffmeyer notes, “is a sphere like the atmosphere, hydrosphere, or biosphere,” except that it “consists of communication: sound, scent, movement, colors, forms, electrical fields, various waves, chemical signals, touch, and so forth — in short, the signs of life.”[12] The point is to demonstrate that life is a function of semiosis. Biosemiotics has recently been taken up in ecocritical studies as part of a turn to new materialism with its emphasis on reconfigured notions of ontology and agency.[13] Stacy Alaimo orients some of these concerns through her concept of “trans-corporeality,” which “reveals the interchanges and interconnections between various bodily natures.”[14] Karen Barad proposes a renovated conception of identity formed through what she calls “intra-action,” which “signifies the mutual constitution of entangled agencies.”[15] Similarly, Jane Bennett’s theory of vital materiality implicitly emphasizes biosemiotic processes by considering how vibrant matter, which includes things such as electricity, chemicals from landfills, and dietary fats, has the capacity to alter human behaviour and consequently political action.[16]

In Art in the Anthropocene, Davis and Turpin argue that artistic responses to the Anthropocene have frequently been “framed through modes of the visual”[17]. How might one develop a writing project that responds to the modes of inscription already intrinsic to living among toxins and their metabolic repercussions? Writing and thinking in the Anthropocene/Capitalocene/Chthulucene requires “staying with the trouble,” Donna Haraway argues, being proximate to thorny entanglements, to the intertwined “material-semiotic worldings” of ontologically heterogeneous partners and their “naturalcultural assemblages.” She adds that “It matters what stories make worlds, what worlds make stories.”[18]. Indeed, if we are to attend carefully to the ways in which stories matter and the ways in which matter makes stories, we must also reimagine what it means to read and write these stories. The Anthropocene constitutes “a series of metabolic rifts,” McKenzie Wark observes, “where one molecule after another is extracted by labor and technique to make things for humans, but the waste products don’t return so that the cycle can renew itself.”[19]. The social formations produced by oil- and petrochemical-related industries create their own metabolic rifts by concentrating capital in massively unequal ways and accumulating forms of dependence on and desire for unsustainable products and lifestyles. Oil is a hyperobject[20] that permeates our biological and cultural metabolism and also our literary tropes[21] and technologies.[22] Consequently, it requires of us new forms of literacy sensitive to metabolisms and shifted senses of scale.

Without intending to be prescriptive, I think of “metabolic poetics”[23] as the term for investigative, experimental practices concerned with the potential of expanded modes of reading and writing to shift the frames and scales of conventional forms of signification in order to bring into focus the often inscrutable biological and cultural writing intrinsic to the Anthropocene, especially as this is reflected in the inextricable link between the metabolic processes of human and nonhuman bodies and the global metabolism of energy and capital. We wear the energy systems that power our societies in the form of chemicals in our flesh and in the hormonal messages of the endocrine system.[24]. We house shifting communities of microbes that reflect our dependence on processed, industrialized food production and antibiotics [25]. As a result of these influences, metabolic rifts have developed within human bodies and societies (obesity epidemics, income inequality) as well as within larger planetary biogeochemical cycles (increasing atmospheric carbon dioxide). How might we expand our capacity for literacy as our awareness of intertwined material-semiotic worldings grows? How do endocrine disrupting chemicals, for example, as forms of biosemiotic writing, put pressure on literary forms and genres? In the series of commentaries that follow, I will explore a variety of research-based, performance-oriented, and investigation-driven practices that embrace scientific experimentation, curatorial methods, speculative modes, multispecies, and polymedia approaches to these and other questions concerning human, nonhuman, and global metabolisms.

8. Dominic Boyer and Imre Szeman, “The Rise of Energy Humanities,” University Affairs  (March 2014): 40.
9. David Biello, “I Just Want to Say One Word to You: Plastiglomerate,” Scientific American, June 8, 2014.
10. Bruce Lourie and Rick Smith, Toxin Toxout: Getting Harmful Chemicals Out of Our Bodies and Our World (Toronto, ON: Alfred A. Knopf Canada, 2013), viii.

25. See Martin J. Blaser, Missing Microbes: How the Overuse of Antibiotics is Fueling Modern Plagues (Toronto, ON: HarperCollins, 2014); Giulia Enders, Gut: The Inside Story of Our Body’s Most Underrated Organ, trans. David Shaw (Vancouver, BC and Berkeley, CA: Greystone Books, 2015); Jeff D. Leach, Rewild: A Collection of Essays from the Human Food Project (Middletown, DE: The Human Food Project, 2016); and Ed Yong, I Contain Multitudes: The Microbes within Us and a Grander View of Life (New York: Ecco, HarperCollins, 2016).

Anthropogenic pollution is not only rewriting our climate, but also the metabolism of our bodies. We wear the energy systems that power our societies in the form of chemicals in our flesh and in the hormonal messages of the endocrine system. We house changing communities of microbes that reflect our dependence on industrialized food production and antibiotics.

I think of “metabolic poetics” as a way of characterizing a variety of investigative, experimental writing practices concerned with the potential of expanded modes of reading and writing to shift the frames and scales of conventional forms of signification in order to bring into focus the often inscrutable biological and cultural writing intrinsic to the Anthropocene, especially as this is reflected in the inextricable link between the metabolic processes of human and nonhuman bodies and the global metabolism of energy and capital.

How might we expand our capacity for literacy as our awareness of intertwined “material-semiotic worldings,” as Donna Haraway calls them, grows? How do the endocrinological effects of chemicals and microbes, for example, put pressure on literary forms and genres? In the series of commentaries that follow, I will explore a variety of research-based, performance-oriented, and investigative-driven writing practices that embrace scientific experimentation, curatorial methods, speculative modes, multispecies, and polymedia approaches to these and other questions concerning human, nonhuman, and global metabolisms. 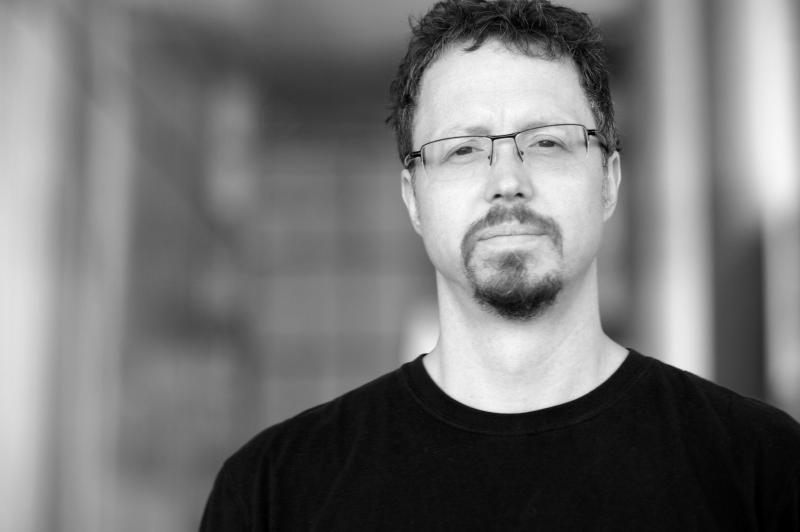 Adam Dickinson is the author of four books of poetry. His latest book, Anatomic (Coach House Books), involves the results of chemical and microbial testing on his body. His work has been nominated for the Governor General’s Award for Poetry, the Trillium Book Award for Poetry, the Raymond Souster Award, and the ReLit Award. He was also a finalist for the Canadian Broadcasting Corporation (CBC) Poetry Prize and the K.M. Hunter Artist Award in Literature. His work has been translated into Chinese, Dutch, Norwegian, and Polish. He has been featured at international literary festivals such as Poetry International in Rotterdam, Netherlands, and the Oslo International Poetry Festival in Norway. His scholarly work has been included in the Oxford Handbook of Ecocriticism, Greening the Maple: Canadian Ecocriticism in Context, and in Fueling Culture: 101 Words for Energy and Environment, as well is in journals such as Environmental Humanities. He is an Associate Professor in the English Department at Brock University in St. Catharines, Ontario, Canada, where he teaches poetics and creative writing.

I am always curious to know about other books or works of art that might be relevant to this series of commentaries. Feel free to contact me with suggestions at adickinson@brocku.ca or @AdamwDickinson

Banner Image (top): Microscope image of my blood cells produced with the assistance of Jeff Stuart and Lucas Maddalena in Jeff Stuart's laboratory at Brock University.