In her work, Renegade Poetics: Black Aesthetics and Formal Innovation in African American Poetry, Evie Shockley reads Gwendolyn Brooks’s “The Anniad,” Sonia Sanchez’s Does Your House Have Lions?, and Harryette Mullen’s Muse & Drudge as epics. She analyzes how their poetics pressure the genre and how their texts “achieve something with the epic that it was not created to do.” Who tells the story for and about the community, and how it is told, is radically transformed. In her analysis, Shockley is also asking questions about reading. She suggests Brooks, Sanchez, and Mullen “require us to accommodate new kinds of heroes and questions, previously unrecognizable as such because of the race, gender, class, and sexual presumptions that have attended the genre of the epic as it developed within the Anglo-American literary tradition.” What do we perceive and what do we render in advance “unrecognizable” when read through a received lens?

Litia Perta asks us to think about criticism as a practice of care and not as attack. This suggests a type of attention, a generative reading method that moves alongside a work and not against it. When I write about the authors’ works in my project, I am writing alongside and toward.

In the past month, I’ve begun another, not unrelated, practice of breathing more space into my body.

Women experimental writers working alongside-within a poetic genre can breathe space into it.

Simone White, 'Of Being Dispersed'

Rachel Zolf, Eileen Myles, and erica kaufman joined Al Filreis to talk about four short poems from what was then an unpublished typescript of a new book by Simone White. The book is Of Being Dispersed, now available from Futurepoem. White performed these and other poems from the collection at a Segue Series reading at Zinc Bar in New York on January 11, 2014. The work responds in part to George Oppen’s Of Being Numerous. Numerousness, pluralism, plenitude of subjects, objects, and sources, are certainly inclusive influences — but are also extended and even defied here by the agony and ferocity of dispersal, the sexual and racial sense of being pushed out.

Trace Peterson, erica kaufman, and Gabriel Ojeda-Sague joined Al Filreis at the Renee & Chaim Gross Foundation in New York City to discuss two poems in CA Conrad’s chapbook, (Soma)tic Midge, published by Faux Press in Cambridge, Massachusetts (2008). Each of the seven poems in the series was written while the poet was under the influence of a color — worn, ingested, or otherwise enveloped.

'The succession of syndromes'

In the beginning, I could not face INSTANT CLASSIC directly. Too bright, I could only handle it in bits, my gaze slightly averted. From this peripheral place, kaufman’s book followed me. I carried it with me on the subway, slept with it beside the bed. I gathered what felt like relevant books and films around me. Talismanic. I kept INSTANT CLASSIC, and kaufman, in mind. And then, I could not look away.

Bernadette Mayer, Julia Bloch, and erica kaufman joined Al Filreis to discuss James Schuyler’s poem “February.” Schuyler read the poem at the Dia Art Foundation in New York on November 15, 1988. John Ashbery gave the introduction, emphasizing how reluctant Schuyler was to read in public. He noted: “As far as I know, this is the first public [reading] he has ever given.” One can tell from the tone of Ashbery’s remarks that he felt that he and the audience were in for a rare treat, a savoring for which years of waiting were worthwhile.

From left to right: erica kaufman, Julia Bloch, Bernadette Mayer, and Philip Good — at the Kelly Writers House, October 21, 2014, on a day when Mayer participated in a live webcast conversation with participants in the free, open online course called ModPo, recorded a session of PoemTalk on “February” by James Schuyler, and gave a reading with Philip Good. The recording of the webcast discussion is available here. The recording of the Mayer/Good reading is available here. The events are fully described here.

On Barbara Guest, 'The Location of Things'

Barbara Guest’s remarkable first book, The Location of Things (Tibor de Nagy Gallery, 1960), establishes that it is possible to reclaim gendered space, and this possibility is manifest in language itself. 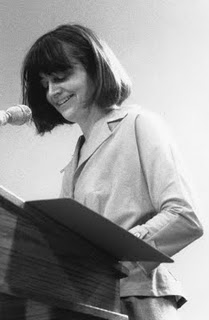 [NB: Inagaki Taruho (1900–1977) was a real modernist dandy who started writing wild, experimental, whimsical stories in the 1920s that blur the boundaries of prose and poetry. Although Taruho did not write what one traditionally thinks about when one imagines “poetry,” his short-short stories are sometimes classified as poetry. His most famous collection is called 1001 Second Stories, which is a collection of funny, little contes that describe the surreal hijinks one might find in the earliest animation that was, not coincidentally, being produced right around the same time. (JA)]

Translation from Japanese by Jeffrey Angles