This morning I went for a run just long enough to enable me to listen to Robert Grenier's introduction (written June 2009) to the collected poems of Larry Eigner. In his essay Grenier does a more or less close reading of five poems. One of them is this: 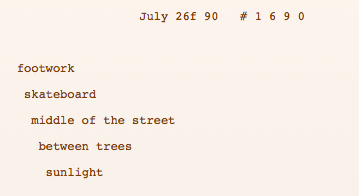 And here's Grenier's fabulous comment: "This is a real ‘moment’ (evoking the appearance and vanishment of all such into and out of existence, and time)—but ‘for the time-being’, accomplishing itself inside an interwoven ‘narrative-of-this-poem’—a very closely observed and ‘animated-in-the-poem’ skateboarder skateboarding down the middle of McGee Avenue in Berkeley—see how the trochaic accent emphases (“footwork”/“skateboard”/“middle”) get balanced by that iamb “between”, so as to evoke (for the reader) actual experience of two feet balancing on the board of that skateboarder (an interesting new word for LE)—and how would Larry Eigner know that, given his circumstance?—going down the middle of the poem (as if it actually were the “middle of the street”)—all this in lines which (seem to) ‘look like a skateboard’ (now that I think about it!) moving forward steadily (one space at a time) rightward from the left margin." 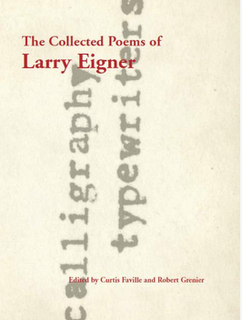