"What do you know of our New Jersey iron saints?"

'You Should Never Have Opened That Door': The story of Long Shot Magazine

I first remember meeting poet Danny Shot at the 1981 On The Road conference, sponsored by Naropa University and held at the University of Colorado at Boulder. A recent graduate of Rutgers University, he too was bitten by the Beat bug and we were both there to attend what turned out to be the last gathering of the major players of 50s bohemian culture. As a relatively sensible American, I had flown in on a cheap US Air flight in order in celebrate the 25th Anniversary of Kerouac’s classic road novel. Danny and his friends opted to take to drive from the East to the Rockies. The long trip was made even longer given the presence of jazzpoet deluxe Ray Bremser in their battered van; his seemingly nonstop beer drinking made for hourly pisstops along the no longer lonesome toll roads of America.

Danny and I eventually ended up as neighbors in Hoboken, living in the middle of the city along the same block. He’s been teaching English in the NYC high school system for over thirty years and has been an indefatigable poetry activist for even a longer time.  He’s currently poet-in-residence at the Hoboken Historical Museum and the events he’s put together have drawn standing room crowds. The secret is an unembarrassed populism rooted in his practice of mentors Allen Ginsberg, Amiri Baraka and Pedro Pietri. It also traces back to his participation the 80s punk scene located in New Brunswick, jokingly/not-jokingly referred to as “The Liverpool of the East Coast.”

For over 20 years Danny was one of the main brains behind Long Shot, a lively magazine that not only survived without institutional support – it even managed to finish in the black and even sold out of a number of issues (a Vanity Fair plug for its issue featuring the poetry musings of Sean Penn inundated their pre-internet PO Box with checks and just plain old cash).  It was a magazine that was unselfconsciously multi-cultural, defiantly working-class and always rooting for the bottom dogs of both literature and society. The earliest iterations of Long Shot merged the aesthetics of the Beats and the Ramones-wing of the Punk world. My first submission to LS was rejected and returned along with a firm letter from Danny that warned me that his magazine was defiantly anti-intellectual and what I was sending was just too high brow for them (Danny claims not to remember this exchange). As the editorial staff slipped out of their mental Doc Martins into the boat shoes of maturity, parenthood, marriage and the work world, the magazine quietly shifted towards a more left-leaning populist political stance, but always remained rooted in the poetics of the Nyorican Café’ and the Beats.

I asked Danny to write a little history of Long Shot, as I think it is instructive as to how a magazine “happened” in both the pre-online era and also in the cultural backwaters of Jersey:

Long Shot made its debut in early 1982, but the idea and planning of the first issue took place in 1980. Cofounders Eliot Katz and Danny Shot were just out of college (Rutgers University) and saw the need for a raw, fresh, and thoroughly exuberant forum for writers who did not fit into the literary mold of the early 1980's. Shot was living in San Francisco and Katz had recently attended a summer session at Naropa Institute. They shared a desire to publish some of the young, exciting writers they had recently been reading and meeting. The money for Long Shot volume 1 came largely from the generosity of poet Allen Ginsberg, with whom Katz had studied at Naropa. To help Long Shot get off the ground, Ginsberg came down to Rutgers to read with the two young poet-editors and donated half his usual reading fee to this new literary project. Production expenses were kept to a minimum. Katz got a job at a print shop, and along with a few sympathetic coworkers printed the first issue on a few small offset printing presses. The volume was typeset by members of the Rutgers school newspaper for the generous price of $8.00 an hour. Text and captions were cut out with Exacto knives and pasted down. Katz and Shot collated the loose pages and brought the magazines to Brooklyn where they were bound. Long Shot #1 features poetry by Susie Timmons, Alicia Ostriker, Richard Hell, Eileen Myles, Kevin Hayes, James Ruggia, Allen Ginsberg, as well as Long Shot regulars Andy Clausen, Katz, Shot, and Robert Press.

Volume #2 came out a year later. After Volume #1 sold out of its initial run of 500 copies, Shot and Katz found themselves broke and trying to raiseproduction expenses by selling ads to New Brunswick businesses including long time Long Shot patrons, The Court Tavern and Melody Bar. Long Shot #2 was put together in much the same way as #1. Vol. #2 featured original poetry by Amiri and Amina Baraka, Jim Carrol, Ray Bremser, Antler, Jeff Poniewaz, Janet Cannon, photos by Deborah Troeller, an interview with William Burroughs, more work by Katz, Shot, Clausen and Press, as well as the Long Shot debut of future editor Jack Wiler.

Long Shot #3 came out in 1984 with the financial help of friends and neighbors. Joanne Lanciotti, who had helped create Long Shot officially took on the title of Art Editor. Vol. 3 also featured unpublished poems by Allen Ginsberg, Gregory Corso, Tom Waits and up-to-then unpublished poems by Jack Kerouac. Long Shot #3 also marks the Long Shot debut of Charles Bukowski. Volume 3 opens up with 5 poems by Bukowski. The back cover is a reproduction of a letter from Buk that reads:

Hello Eliot Katz; Dan Shot;  Glad I got some poems by you. Take your time.  Ending 2nd bottle of wine, radio blasting Eric Coates - All's Well. Everytime I get Drunk and figure I'm not in the tank, then, That's a good night.  Easy, Buk 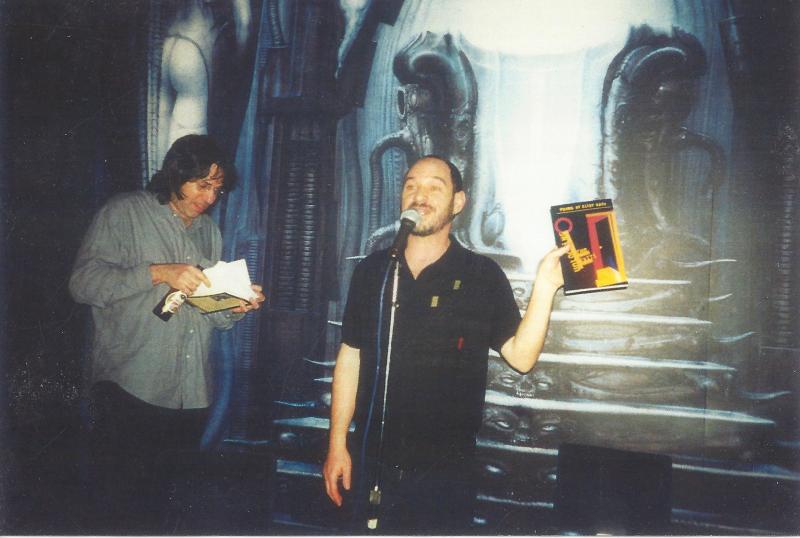 Long Shot began its life in New Brunswick before moving base to Hoboken in 1988. A number of editors, most from New Jersey, left their mark; Eliot Katz, Caren Lee Michelson, Jack Wiler, Nancy Mercado, Lynne Breitfeller, Tom Pulhamus, Jessica Chosid, Ernest Hilbert, David Stack, Magdalena Alagna, Andy Clausen, and of course Publisher Danny Shot. During its time of existence (1982-2004) Long Shot tried to follow the aesthetic laid down by Italian film director Lena Wertmuller, sex and (leftist) politics, all the while un-self-consciously offering a diverse group of writers, artists, thinkers and raconteurs. All the while, Long Shot stood true to its New Jersey roots: Writing for the Real World. And New Jersey’s as real as it gets.

The curious might have to reach out to Danny directly for back issues as the magazine has no online presence and its files remain in the Shot household. This is not a Luddite or even an anti-institutional gesture; Long Shot’s aesthetic was always more about the moment it was in and less about what people thought about you when you were dead. And after years of promoting the local talent, Danny will be publishing his first book of poems through the offices of Fort Lee’s Cavan-Kerry Press.  And for those interested in obtaining copies of Long Shot magazine and books, contact Danny at: dannyshot57@gmail.com.

JOEL LEWIS is the author of  My Shaolin (2016), North River Rundown (2013), Surrender When Leaving Coach (2012), Learning From New Jersey (2007), Vertical’s Currency (1999) and House Rent Boogie (1992), winner of the second (and last) Ted Berrigan Memorial Award. He edited Bluestones and Salt Hay, an anthology of contemporary NJ poets, as well as editing Reality Prime, the selected poems of Walter Lowenfels and On The Level Everyday, the selected talks of Ted Berrigan.  A social worker by day, he has taught creative writing at the Poetry Project, The Writer’s Voice and Rutgers University. And, for better or worse, he initiated the ill-fated New Jersey Poet Laureate position that was such a headache for Amiri Baraka. With his wife, Rutgers University cinema professor Sandy Flitterman-Lewis, he resides in Hoboken.

The image above is that of the "Alexander's mural" — a gargantuan untitled mural painted by British painter Stefan Knapp. Once considered to be the largest mural in the world, it was affixed to the outside of Alexander's, an NYC area clothing chain known for it's low prices on high end clothing and minimal amenities. The mural was situated at the junction of Routes 4 and Route 17 cloverleaf interchange (btw — the first cloverleaf interchange in the world appeared in NJ in '29), a headache-inducing 24 hour traffic jam calamity. It was my, and many locals, introduction to contemporary art. The mural existed from 1961-1998. It was then disassembeled and placed into storage. It is now property of the Bergen County Museum of Arts and Science, which has been without a brick and mortar presence since 2007.

Field notes of a rooted cosmopolitan
'You Should Never Have Opened That Door': The story of Long Shot Magazine