“Proxy” — someone authorized to act on behalf of another; an authority or power to act for another; a document giving such authority. Those are the defining terms with which most of us first learned the word, though we now live in a universe of proxy servers.

A proxy is a sort of trope.  All metaphors, composed of vehicle and tenor, are proxy enactments. A persona is a proxy. Ralph Ellison told us that there was no more powerful metaphor for the human condition than race in America. For reasons we might well wonder about, reader response criticism, whether the phenomenological or the psychological versions, took little note of the pressures race might place on reading practices.

“Post-racial” American English is a repository for proxy formations assuming the place of race without ever displacing it.

Proxy is the title of a wonderful new book by r. erica doyle, published by Belladonna Press. I hope to write elsewhere about this work and about doyle’s surpassing art; what I want to address here, though, is the book’s framing, a sort of proxy war that erupts on the pages of the book.

Proxy opens with an epigraph from a 1997 book titled A Tour of the Calculus, by David Berlinski. Other quotations from Berlinski’s volume frame sections of Proxy, authorizing, as it were, the metaphorical explorations doyle offers. But it’s an earlier Berlinski book that frames my reading of doyle’s framing.

David Berlinski is a former colleague from early in my teaching career.  Not long after I arrived at San Jose State, I was told of a new professor who might share my interests in philosophy and literature.  So it was with that in mind that I picked up a then recent book of Berlinski's on display in the San Jose State campus book store.  Berlinski was not with us long at SJSU. Seems he had more pressing interests than actually meeting with students or returning their papers.  I gather he was not entirely happy with his time at the university.  Shortly after his departure he published a thinly veiled fiction in Heterodoxy, the squibulous, some times scurrilous paper launched by David Horowitz and company in their wars against America’s tenured radicals, a short, sort of story, titled, I seem to recall, “Old Hose.” It was a sorry piece, one whose author felt compelled to belittle people’s physical appearance as much as their ideology.  I made no effort to keep up with Berlinski’s subsequent career, but found him on my television set one day when the book channel broadcast a talk he was giving at the Discovery Institute, where he was now employed. Turns out he had taken to writing such works as The Deniable Darwin.

But it was the earlier Black Mischief: Language, Life, Logic, Luck that I have never forgotten.  The subtitle had attracted my attention.  I’d expected what Berlinski’s preface promised, “the moment in which various lines in an intellectual field of force collect themselves into a kind of dense knot.”  You, like me, may read those words and think “charged detail,” or “objective correlative.” Here is an example of the sort of knot Berlinski ties for his readers.  He is describing his visit to a restaurant: “Everyone ate rapidly, with the rather revolting heads-down posture that the Chinese adopt when alone, clicking their chopsticks as if they were castanets.”  (If you’d like, you can confirm the accuracy of my transcription with your own visit to page 8.)

But it was Berlinski’s reflections upon his life as a teacher that burned the memory of this book into my mind.  Take page 27:

“I had expected that my classes would be composed of sullen blacks, eager to offer me an act of racial revenge . . . but my students were New Jersey ethnics chiefly, and the blacks who came to my lectures treated me with sad, fuzzy softness.”

I suspect those black students sensed something, something sorrowful they’d seen before.  Try page 42. Berlinski is taking a tour of The University of Puget Sound, has just walked past Jones Hall and the Hub:

“‘Why do you want to leave New York?’ Magee asked as we were walking toward Jones Hall.”

“‘No Schvugies,’ I had said to a friend when asked precisely the same question. ‘You walk out in the street and there are no Schvugies walking around with one hundred pound radios glued to their ears.’”

“For obvious reasons - Magee looked like the sort of man who might actually wish to clap some smoldering Black on the shoulder and exclaim moistly that he would be proud to think of LeRoy here as a friend – I elected not to pursue the theme of racial rawness.”

But of course Berlinski did elect to pursue this racial rawness, right into the pages of this book and no doubt beyond. Did I mention that Berlisnki, like me, was teaching courses that Sa 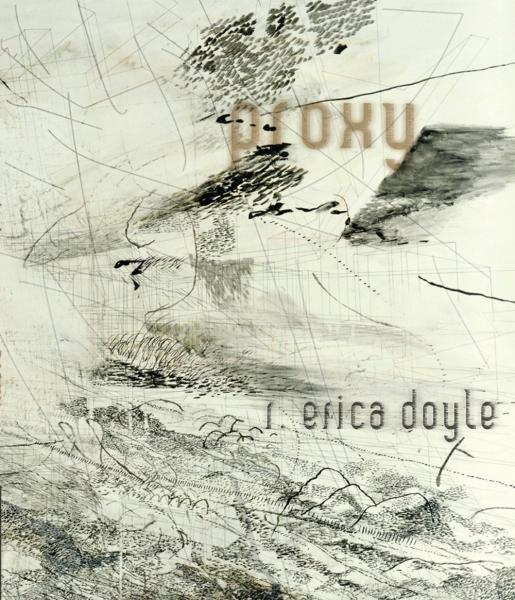 n Jose State listed as satisfying the cultural pluralism requirements?  Mind you, these quotations are not from some pre-Civil Rights Act era.  This is the second edition of his book, dated 1988.

I doubt that doyle knows any of this; she doesn't strike me as the Deniable Darwin sort of poet. What interests me is the set of tensions that arise in a reader who has read those other Berlinski works and now reads them within and against doyle's prose poems.

“You hope to perform an autopsy. The dead and the nagging questions” (Proxy 9).

A.L. Nielsen is a poet and critic whose work has long grappled with the mysteries of race in America. His most recent volume of poetry is A Brand New Beggar. His critical book Integral Music was awarded the Josephine Miles prize. He lives in Pennsylvania and California.