In my last post I posed the question: how did I discover and engage with Clark Coolidge's poetry in the first place? Every reader will have her own story to tell in this regard; here's my story. As is I suspect the case for most English Majors graduating from U.S. undergraduate programs in the early 1990s--and perhaps still today? more preservers of tradition than innovators, universities and their English departments in particular are notoriously inept at addressing the contemporary--Anglo-American poetry in my formal education ended with Pound and Eliot. (Gertrude Stein I had to discover on my own, though my own avant-garde eanings in the late 1980s also led me to Kerouac, Burroughs and Artaud). I knew names of some contemporary poets and has some familiarity with the Beats (a hardbound copy Ginsberg's collected poems was one of the first poetry books I ever bought, at the Strand on some early trip to New York City), but I had no way of orienting others: no sense of distinguishing an Ashbery from a Hollander, a Creeley from a Lowell, let alone connecting them up to the present moment. 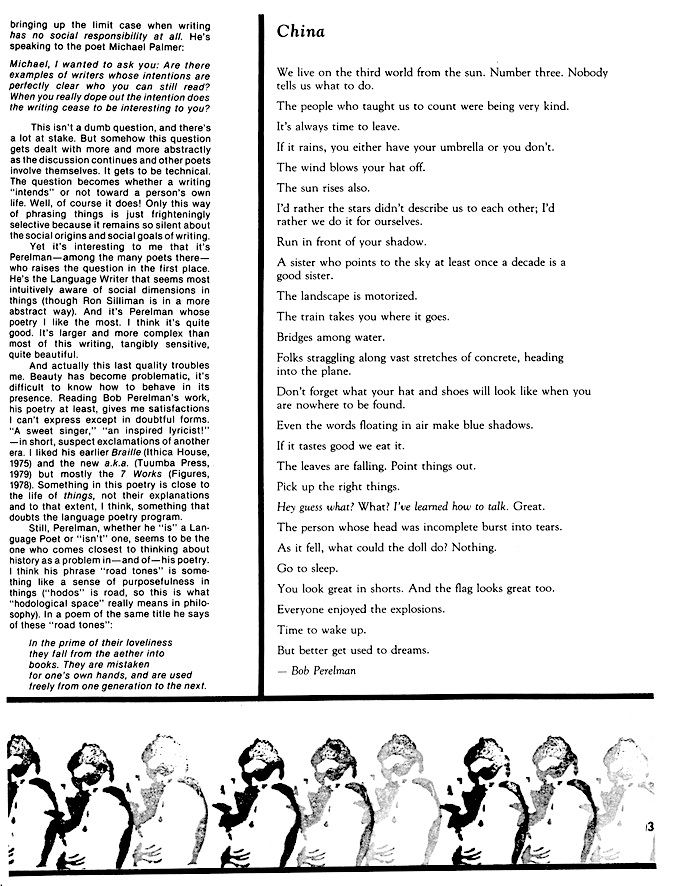 In beginning my graduate studies in the mid-1990s, it was in the context of studying postmodern literature and theory that I first engaged with Charles Olson's work, as well as, in the midst of Fredric Jameson's now classic theories of postemodernism, a curious little poem called “China” by Bob Perelman. I remember throughly enjoying the discussion we had in class about what kinds of speakers could offer these seemingly disconnected bits of observation and experience, though my full initiation into what was being called “Language Poetry” would take place a year or so later, upon hearing Charles Bernstein read his poetry at the 20th Century Literature Conference in Louisville in 1994. I enjoyed the sound-and-sense play of his work: it reminded me less of any “poetry” I knew and more of Captain Beefheart. Back home, I checked out and devoured with great relish Dark City, the newest Bernstein collection at my university library.

As is my inclination, when I find something of interest I read everything I can find about it; this “language poetry” seemed to be something that connected up in the present moment back to the great Modernists I knew (Pound and Stein; someone named Zukofsky was completely unfamiliar to me), creating a living tradition in the wake of what my academic training lacked (or more likely willfully ignored). And the more I read about “language poetry,” the more the name Clark Coolidge kept appearing. Clearly he warrented investigation.

At some point in the next few years (mid-1990s) I picked up his book Solution Passage: Poems 1978-1981, a dense book of poems for such a short span of years through which I did not immediately find a clear way.  In December 1997, I took a trip to Toronto to do dissertation research (on my first and soon to be abandoned topic), visit friends and see the city, reporting in an email to my friend Logan Esdale that I had found a copy of Barrett Watten's essay collection Total Syntax at a used bookstore in Toronto. Watten's discussion of Coolidge's poetry was a revelation for me, especially for the passages from the early poems he included. I had been hearing and reading how key the “early Coolidge” was for Language Poetry and yet had never seen these books before and had no immediate way of obtaining them as they were all well out of print at this point. (Remember, this was before Project Eclipse or abebooks.com.)