All poets were truly welcome 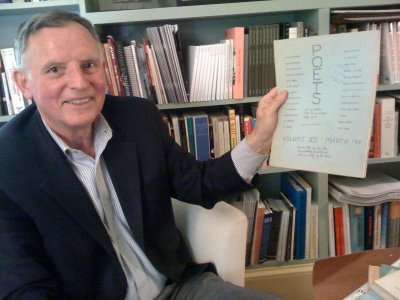 I met Dan Saxon through Penn — through the Writers House; he graduated from Penn in 1960. His son Jon was my student years ago, and his daughter Jerilyn and her husband Brian are members of the Writers House Board. Dan has shown interest in what we do at the Writers House for years — attends all our New York events and has been to the House itself many times. It was perhaps during our second or third meeting that Dan mentioned he’d had a connection to the avant-garde poetry scene of the early ’60s in New York. Finally, a few weeks ago, I arranged for Dan to come to my office, which doubles as a recording studio, and we talked for an hour or so. A new PennSound podcast is a somewhat edited portion of that longer conversation.