With what geometry (PoemTalk #101)

Simone White, Sophia Le Fraga, and Andrew Whiteman joined Al Filreis to talk about Ed Dorn’s “The Sundering U.P. Tracks.” A political reading of the poem emerges through the discussion, as they group situates it as a late-1960s reflection on a slightly earlier moment of realization and radicalization: the turning-point summer of 1965, when Dorn’s collaborator, photographer Leroy McLucas, arrived in Pocatello only to discover that he was to be housed on the other side of the tracks. The racial trope and idiom of the US East reverts to its literal origins in the making of the US West. And there it is: the key fault line, a built-environment actuality and metaphor. Dorn here is ready rhetorically and politically for a counter-expansion that rereads American generations of Manifest Destiny, monopoly, segregation, and local oligarchy on one hand, and, on the other, “summer firebombs / of Chicago.”

Andrew Whiteman (guitarist, composer, frontperson for Apostle of Hustle, etc.) is an enthusiastic promoter of the experimental poetry tradition, especially in Canada. He has collaborated with Ariel Engle in the board AroarA, which released the EP "In the Pines" based on the poetry of Alice Notley. He has just made available "Sonic Poetry - Investigative Poetry" as a YouTube video.

Notley's 'In the Pines' set to music, and performed

Andrew Whiteman (Broken Social Scene, Apostle of Hustle) and Ariel Engle (Land of Kush) have formed a new group, called AroarA.  Andrew has long been a PoemTalk listener and serious user of PennSound recordings. He visited Kelly Writers House a few years ago, while in Philadelphia on tour — came by to meet us and get a feel for the actual place. A few weeks ago, Andrew returned to KWH with Ariel and performed songs from In The Pines by Alice Notley. They use all fourteen poems from Alice’s book and convert them (back) into faux folk song forms. Each poem became its own song.

In a 2011 interview (given in Miami),Whiteman was asked about the book of poetry he's been writing (how far along was he?), and here was his answer:

Not far. Broken Social Scene is still working a lot. Plus, I have a new band (hopefully playing on the 30th) called AroarA with Ariel Engle — she sings in Montreal with a band called Land of Kush. We are singing the poetry of Alice Notley's In the Pines in a bizarrely concocted version of faux folk. But I do keep working away at it, so hopefully it'll be online by the end of the year. It's called Tourism and its about being on the road. I might read a couple of things.

Per Larry Sawyer, Andrew Whiteman has asked the following: 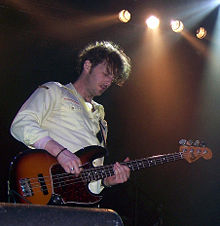 I’m interested in poetry of the ‘other tradition,’ as spoken about by Jerome Rothenberg or Marjorie Perloff or blogged by Al Filreis or Lemon Hound. It’s not simply contemporary work. It’s a way of reading poetry through types of restlessness of being in the world. It could be Pound translating “The Seafarer” or it could be Linh Dinh’s photo blog; the poet is engaging with the ‘soul of the world’ which he or she finds to be fucked up in some way or another. The stance of being against the zeitgeist. Saying that, I definitely am not a fan of all types of ‘rebellious’ / ‘disruptive’ poetry, whether abstruse or ‘slam’, just because it speaks out. Nor do I dislike the haiku of Basho or the ‘everydayness’ of Berrigan and the New Yorkers. I suppose the way I read these writers is that their voices are implicitly rejecting of what society-at-large was pimping at the time. I feel like the times are hurtful, solipsistic to a new level and cruel and ignorant to staggering degrees. Poetry is a way to make vision clear. What’s my fucked up version of Shelley? “Poets are the true legislators of the unacknowledged world.”

Andrew Whiteman is a Canadian musician and songwriter. Forming the Bourbon Tabernacle Choir in Toronto out of high school, he eventually left the band in 1993 after eight years and went on to produce a solo effort, Fear of Zen, in 1995, as well as an album with the band Que Vida in 1998. Leslie Feist subsequently invited Whiteman to collaborate with herself and what was then essentially the core of Broken Social Scene—Brendan Canning, Kevin Drew and Justin Peroff.[1] The chemistry was successful and Whiteman became one of the band's four members to consistently appear in every tour. Whiteman also fronts the band Apostle of Hustle with bassist Julian Brown and drummer Dean Stone.