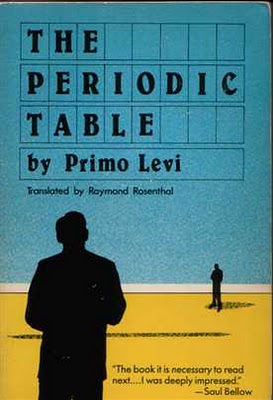 In Primo Levi's magnificently modern book, The Periodic Table, the finest of the many fabulous sections is the chapter called "Chromium." Readers of this blog who haven't read "Chromium" should drop everything and read it now. Here's a crude PDF. Good enough. Please read.

At an event we called “7 Up on Gold” — featuring seven people speaking for seven minutes each about gold, the color or the element — I chose to speak about the chapter entitled “Gold” in Primo Levi’s brilliant book, The Periodic Table. I’ve taught the book a number of times in my course on the Holocaust.

Tuli Kupferberg, 'Morning, Morning' and 'No Deposit, No Return'

Judd Tully interviewed N. H. (Norman) Pritchard on Sept. 11, 1978. The ninety-minute conversation is informative and engrossing, offering more information about Pritchard than has been previously available. Pritchard was a poet in the CETA / Cultural Council Foundation Artists Project in New York and Tully, a CETA writer, interviewed him as part of the program. PennSound is happy to make this recording, made as part of the Artists Project, available, thanks to Tully and to Molly Garfinkel of CityLore.