Christie Williamson, a Shetlander poet who resides in Glasgow, has published a new book with LuathPress in Edinburgh. Its title is Doors tae Naewye. Many of the poems are accompanied (as notes) by English translations. Some are a mix of English and Shetlandic. One poem, “St. Catherine’s,” is in 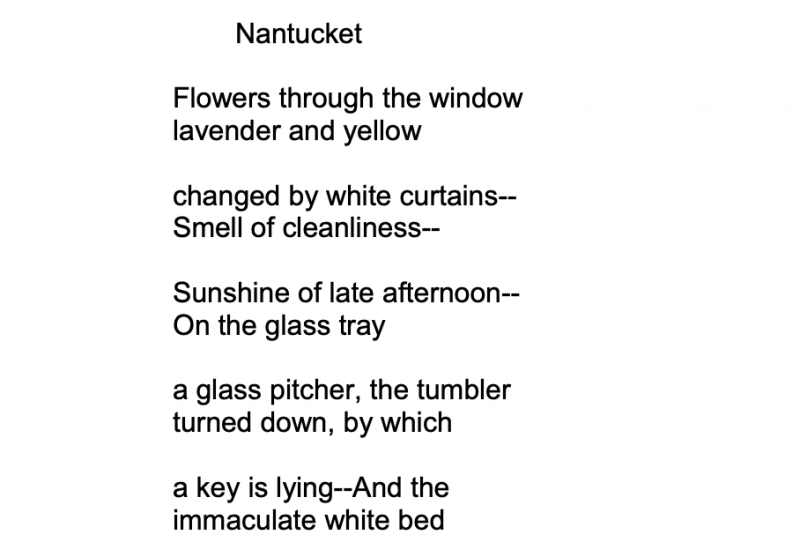 part a response to William Carlos Williams's “Nantucket.” My own copy of the book, sent to me as a gift by Williamson, includes little handwritten notes, in pencil, slipped into various pages. The perfect treasure hunt for the reader-critic-fan, which is what I am with respect to this verse. The note, reproduced above, reads: “Written on arrival on my first of many visits to my cousin's second home/holiday let in Scalloway — the house is called St. Catherine’s and I’d been contemplating William Carlos Williams's ‘Nantucket’ for Essay (two? three?)” The reference here to “Essay (two? three?)” is to ModPo, the open online course with which Christie Williamson has a long association. Participants were asked in a recent season of ModPo to write (in the second of four essays, in fact) about “Nantucket,” with its window-framed “optics” (Williamson’s word) “changed by white curtains” (Williams’s phrase).

Christie Williamson reads and explains a poem in Shetlandic

During a visit to the Kelly Writers House — on his way from Glasgow to Managua — Shetland poet Christie Williamson took some time to read his poem “Da Burn” and responded to a few of our questions about it and the Shetlandic language. Click on the screenshot below to watch the video. The text of the poem is also below.