Christine Nelson, Davy Knittle and Erica Baum joined Al Filreis to talk about Erica’s Dog Ear, a book of photograph-poems, in which each poem is a meticulous reproduction of a dog-eared page of a mass-market paperback photographed to isolate the small, diagonally bisected squares or rectangles of text.

Or: fighting against fear

Ever since I saw the photographs associated with Erica Baum's book of photographed juxtapositional found poems, Card Catalogue (1997), I've been rather obsessed with the project. I've taught it to my students many times. I can't think of a better way of extending forward the lessons they and I learn when encountering imagism and other radically condensed juxtapositional language at the beginning of poetic modernism. Baum of course has often photographed the language she finds out there and is especially attracted to categorizing systems, such as the codex (Dog Ear) or the catalogue. This conceptualist consciousness — and devotion to words in the ambience (as in: who needs to create them? they're there) — I find extraordinarily teachable and infectious. One of my students is a young autistic man, Dan Bergmann. Readers of this ongoing commentary will surely have heard of Dan’s feats of talking (writing, really — or, still better: spelling). What is even more remarkable is the way in which Dan becomes aware of categories and meaning-systems.

Erica Baum’s Study is a text rich with texture. With contexture. We read the tactility of the woven page, the richness of the colors and the striking design of the background. Its allusiveness: the allusion to a source text. Its elusiveness: the oblique referentiality and poetry of the words.

Coming to the work without any paratextual context or explanation, a reader might first be aware of the ‘bookishness’ of the piece. To the conventions alluded to. These are ‘pages’ or, at least, parts of a book. Time for your close-up, book. There seem to be source texts that inform the work, even if it isn’t clear what the sources are. And these sources may be real or imaginary texts or contexts.

From Jersey City to Jesus 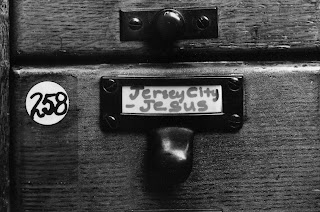 I first started to look at Erica Baum's art when she did her Card Catalogue series: close-up photographs of old library card catalogues that showed several of the card tabs imprinted or typewritten (and sometimes, for really old cards, handwritten) to indicate subject headings, categories, etc. Several of these photos show the catalogue drawer labels. My favorite of these is "Jersey City—Jesus." Anyway, that was 1997. Erica has done several interesting projects since then, all exploring the visual qualities of language as photographic subjects; words in the visual ambience, just there for the looking. Ubuweb has a pretty good collection of PDFs marking the progress of this art. Have a look.

“The card index marks the conquest of three-dimensional writing, and so presents an astonishing counterpoint to the three-dimensionality of script in its original form as rune or knot notation.”  — Walter Benjamin, One-Way Street

Tan Lin turned me on to the work David Bunn, who some years ago took possession of the entire Los Angeles public library’s card catalogue. Tan had noticed my interest in Erica Baum’s word-centered photography of old catalogues, and suggested I get to know Bunn's project.

Leah Ollman wrote an article for Art in America on Bunn in 2000, and here are two passages:

As libraries replace their card catalogues with on-line databases, the cards themselves--obsolete, bulky, worn--are usually discarded. Artist David Bunn rescued two million such cards and, in his elegant installations, directs our attention to the strong poetic voice still coursing through them. In 1990, David Bunn took possession of the two million cards in the Los Angeles Central Library’s catalogue somewhat in the manner of an eccentric heir claiming the unwanted portion of an estate. To administrators at the library, the card catalogue was not so much an inheritance as the deceased itself. Its contents had been made available on-line several years earlier, and it sat, an unwieldy, inconvenient corpse, awaiting suitable disposal. Why fill a storeroom with information that can now be saved on a chip the size of a postage stamp?

the second-floor terrace of well-being

The new issue of Private Circulation features Erica Baum's Dog Ear. The piece reproduced here is the one called "Mad." Baum's work, as always, is photography and it's also conceptual poetry. Private Circulation is a monthly PDF available only by email subscription.

Readers of this blog will know that I am a fan of Erica Baum’s photography. Well, good news: we can see her new work at Dispatch, 127 Henry Street (NYC), until March 22. Below at left is one of the new photographs, and here’s a short review from Artforum by Robin O’Neill-Butler: