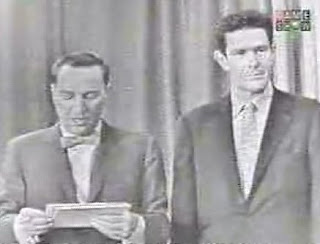 John Cage as a guest on a TV game show. For more, click here.

Chanting the body: A pedagogy

I've already commented here on Jerome Rothenberg's compelling skepticism about the efficacy of the classroom. "As for poetry 'belonging' in the classroom," he wrote, "it's like the way they taught us sex in those old hygiene classes: not performance but semiotics. If I had taken Hygiene 71 seriously, I would have become a monk; & if I had taken college English seriously, I would have become an accountant." Hilarious and devastating critique! Of course Rothenberg taught in classrooms for many years, but "realize[d] that the classroom becomes a substitute for those places (coffee shop or kiva) where poetry actually happens & where it can be 'learned' (not 'taught') in action." In a short prose piece from Shaking the Pumpkin, called "An Academic Proposal" (1972), Rothenberg advocated the point thus: "Teach courses with a rattle & a drum."

During the semester just now ending, the students in the Writers House Fellows seminar and I grappled with this problem. Every fine session of analysis we effected produced an irony: in our classroom, together, we were getting good at understanding Rothenberg's doubts about the relevance of classroom understanding. We had no rattle and drum. We even tried to chant but it was always already too well framed within the institution: the counter-institutional urge was too well made by the thing we wanted to repress or forget.

Finally, though, many of us did chant.

We gathered at the Writers House and make recordings of archaic poems drawn from Rothenberg's Technicians of the Sacred. We presented a CD of these recordings to Rothenberg when he visited. Here's a link to one of them: it's a Polynesian poem called "The Body Song of Kio." It gets a bit sexy (and frank) so don't play this with your kids around. Our main chanter is Simone Blaser.

This particular song — the very fact of our singing it after understanding but not doing anything about the pedagogy of rattle-and-drum — nicely connected us back to Jerry's hilarious line about Hygiene 71. We could study the body and sexuality and become monks; chanting this song made us vocal bodies and seemed to augur a better, fuller future for the students. But analogy between Hygiene and Poetry Class holds the day: "English" class might geniuinely lead to a love of the poem — of doing it.

What do Newton Minow and T. S. Eliot have in common? 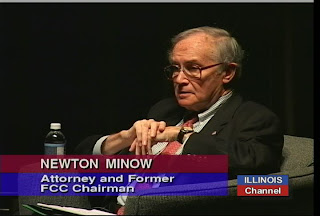 This is really a quiz question. What indeed do Newton Minow (JFK's then-young FCC chairman) and T. S. Eliot have in common? You really should know the answer to this.