Slowing the rate of perception (PoemTalk #134)

Al Filreis was joined for this episode of PoemTalk by Evelyn Reilly, Joshua Schuster, and James Sherry to discuss the title poem of Mei-mei Berssenbrugge’s book Hello, the Roses (New Directions, 2013; 58–62). Berssenbrugge’s PennSound page includes two recordings of her performance of this poem. The recording we played before our discussion is from a reading given at Dominique Levy Gallery in New York in March of 2016.

Our poem is in two sections. In the first, a woman meditates upon — and communicates with — a rose. In the second, the rose responds. The second begins: “The rose communicates instantly with the woman by sight, collapsing its boundaries, and the woman widens her 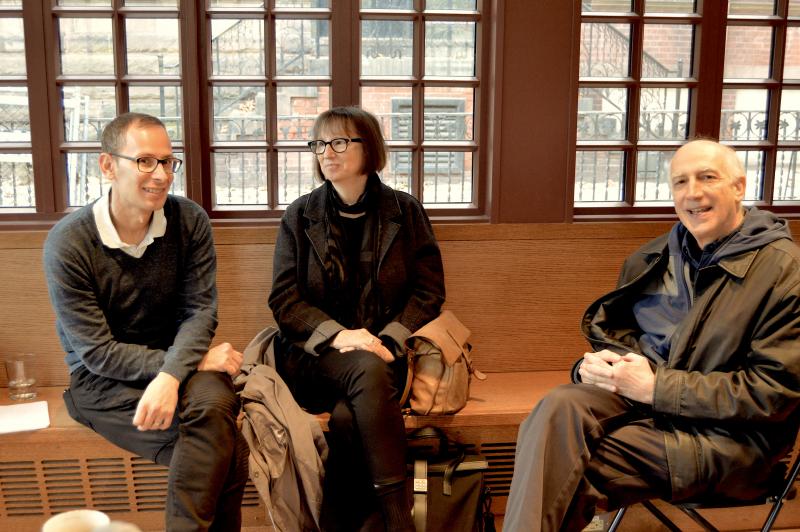 boundaries.” The poems of Hello, the Roses often feature a person’s efforts to understand animals (especially “Animal Voices” and “DJ Frogs”) and plants (“Slow Down, Now”). In “Verdant Heart” communication flows back and forth between a rose and the speaker, although the emphasis in that poem is the increasing ecological awareness of the speaker. “I begin perceiving through the plant” and her “feeling for flowers” becomes something of a deep mirroring. When, after perception has slowed, when a plant can be asked for inspiration, a frog suddenly creates an “occurrence” by “diving into the pond” and the poem recalls the visual and aural stillness central to the tradition of Asian poetics. There the frog is ultimately an object of contemplation. But in “Hello, the Roses,” however, the structure of mutual “inter-being” (a key term here) is quite explicit. (Above, from left to right: Joshua Schuster, Evelyn Reilly, James Sherry.) 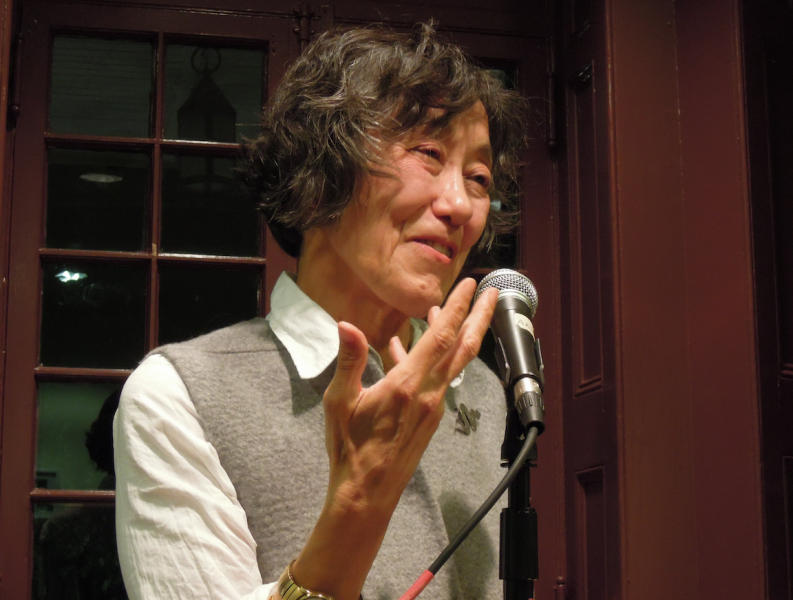 In the first half of “Hello, the Roses” the woman, no doubt mindful of the modern poetic history of the rose (Williams, Stein, H.D., Barbara Guest, et alia), seeks a new kind of making newness, newer even than “the rose if obsolete,” more akin to thinginess than the rose that is insistently a rose. For Berssenbrugge the rose is necessary in the person’s search for a “felt sense,” for “touch[ing] dimensionality,” for discerning the rose’s very redness as a thing created by “light falling on the back of my eye.” (Light, everywhere in Berssenbrugge poetry, from early to late, is a physicality.) “[S]carlet itself is matter.” And in the second half of the poem, then, a kind of subjectivity emerging from the rose itself establishes “an affinity between awareness and blossom.” The rose is a symbol but can be apprehended literally. “The rose symbolizes the light of this self-affinity.” This is what Berssenbrugge, in “Slow Down, Now,” calls “a delicate empiricism.” Mei-mei Berssenbrugge tells us that she equates hope with intuition; her fond wishes (she writes in “Pure Immanence”) are not “separate from the environment.” Such integration, non-separateness, or synthesis — such slowed-down empathy – enables a capacity for inter-being. She has said elsewhere that ecological awareness is a collective activity, but in this poem she seems to intend for that collectivity to include all parts of the whole climate. Saying “hello” is the start. (Above left: Mei-mei Berssenbrugge at the Kelly Writers House in 2013.)

Evelyn Reilly is the author of Styrofoam, Apocalypso, and Echolocation, all published by Roof Books, as well as Hiatus from Barrow Street Press and the chapbook Fervent Remnants of Reflective Surfaces from Portable Press at Yo Yo Labs. She recently presented “visual essays” on feminist poetics at The Kitchen in New York City as part of Joan Retallack’s The Supposium:Thought Experiments & Poethical Play in Difficult Times. She lives in New York City and works as a writer for various museums. Joshua Schuster teaches English at Western University in Canada. He is the author of The Ecology of Modernism: American Environments and Avant-Garde Poetics (published in 2015). His recent essays have appeared in Resilience, Antennae, Parrhesia, Critical Perspectives on Veganism, and After Derrida and he is working on two book projects, one on the cultural representations of animal extinction, and another on poetry and outer space. Back in the fall of 1995, Josh was one of the founders of the Kelly Writers House. James Sherry is the author of thirteen books of poetry and prose, most recently The Oligarch (Palgrave MacMillan, 2017) and the poetry book Entangled Bank (Chax Press, 2016). Since 1976, he has edited Roof Books and Roof magazine, publishing more than one hundred and fifty titles of seminal works of language writing, flarf, conceptual poetry, new narrative, and environmental poetry. James founded the The Segue Foundation, Inc. in 1977, which has since then produced more than ten thousand events of poetry and other arts in New York City.

This episode of PoemTalk was directed and engineered by Chelsey Zhu, Anthony Lagana, and Zach Carduner, and was edited by the same talented Zach Carduner.

We wish to express our gratitude to Nathan and Elizabeth Leight for their ongoing support of PoemTalk.