Alan Golding, Lily Applebaum, and Herman Beavers joined Al Filreis in the Wexler Studio at the Kelly Writers House — the first time PoemTalk recorded in the new studio — to discuss two short poems by Tyrone Williams that appear in the book published by Omnidawn in 2008 called On Spec. The two poems appear in the book’s first section, called “Eshuneutics.” “Written By H’Self” [text] is the first poem in the section and the very first in the book. “Cant” [text] appears fourth in the book. We based our discussion on the recording of the two poems, available with many others on Williams’s PennSound author page, made during a reading he gave in the Segue Series at the Bowery Poetry Club in December 2007, prior to the book’s publication. 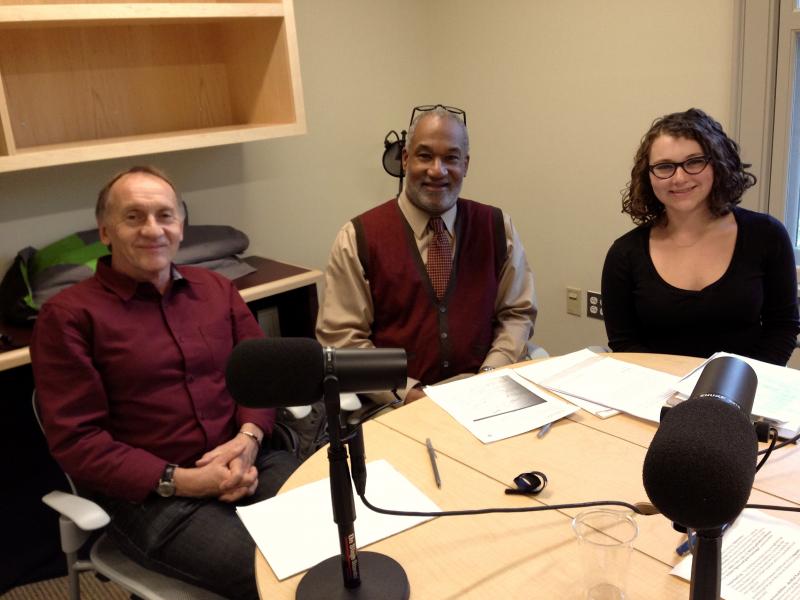 These densely allusive poems meant that our first task was to peel back at least some of the layers of referentiality; yet the layers overlap, are torqued, punned, entendred, homophoned, and doubly and triply and quadrupally historicized — sometimes in one word or phrase, conjuring social, geographical, historical, juridical, psychological, musical, poetic, theoretical registers. Among the allusions we trace: Eliot’s “Tradition and the Individual Talent”; the Washington/DuBois debate over the “Talented Tenth”; the “one-drop” racial rule; the John Henry Complex; the Cumberland Gap as an escape route; the Gap (source for jeans) and marketing fetishes; the folkloric figure of Stagger Lee, who murdered for the swiping of his Stetson; the Happy Feet of African American dancers and Disney animationists; the signature of the slave narrativist, needed to “prove” her and his capacity for self-authoring; Booker T. Washington’s Atlanta Exposition speech of 1896; “Terrible Tom” with his three historical personages, including the blind autistic musician whose race and music are categorically indecipherable;the historical relegation of black musicians to vernacular music; and Moby-Dick. After all this, Herman Beavers contends that Tyrone Williams “sings the holes in history” and indicates ways in which “History with a capital H is not adequate to talk about all this stuff.” And what alternatively can be adequate? Well, we’d argue: poetry — indeed, poems as specific and yet as capacious as Tyrone Williams’s.

Our director and engineer for this eighty-sixth episode in our series was Zach Carduner. Our editor was Amaris Cuchanski. And we at Kelly Writers House and PennSound sent a sweet thankful shout-out to Gary and Nina Wexler for making our dream of a recording studio here a reality.