The oldest recordings in PennSound are currently those of Guillaume Apollinaire, recorded on December 24, 1913, almost exactly 102 years ago from the time of this post. As Richard Sieburth notes in “The Sound of Pound: A Listener’s Guide,” 1913 was a crucial year in the history of the phonotext. A then-Imagist Ezra Pound visited the lab of l’abbé Pierre-Jean Rousselot, the groundbreaking phonetician and dialect scholar. Pound read into Rousselot’s phonoscope, a device that could inscribe sound to paper. Unlike the familiar synaesthetic process of inscribing sound to a medium that allows for later playback, Rousselot’s machine only produced images of sound, to be studied visually, a synchronic portrait of diachronic speech dynamics such as pitch and vowel sounds (see image). 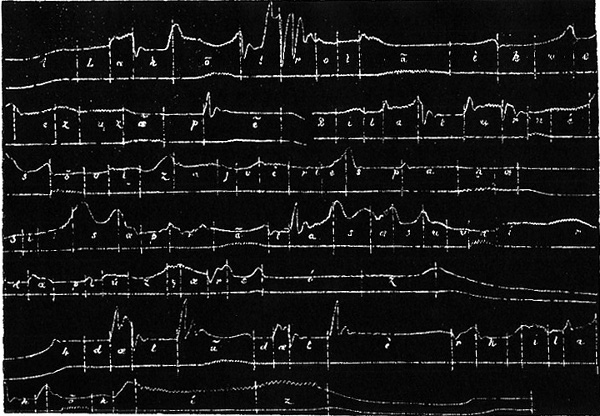 The phonoscope is very much a forebear of modern methods of linguistic study, such as the examination of the visualization of vowel formants using spectrograms. In fact, Mark Liberman, in a post on this very topic of Pound and Rousselot, writes of Rousselot’s work: “L'abbé Rousselot was one of the first to attempt systematic measurement of the physical facts of speech in relation to their linguistic function.” But rather than pursuing an interest in the nature of speech, according to Sieburth, Pound and “[t]he ardent vers libristes were presumably eager to find out whether Rousselot’s modern recording devices (which produced what look like intricate seismographs of vowels, consonants, pitch, and tempo) could provide scientific proof that free verse was, in its own way, just as ‘regular’ or ‘formal’ (in terms of the patternings of accents or quantities) as, say, the traditional alexandrine.” (These topics are the focus of Michael Golston’s fantastic book Rhythm and Race in Modernist Poetry and Science.) Interestingly, Apollinaire’s recordings of the same year also came from a linguistic speech lab, that of Ferdinand Brunot, the founder of Les Archives de la Parole at the Sorbonne.

According to Sieburth, Brunot’s project was founded in 1911 and funded by Émile Pathé, an owner of the film and recording company Pathé, one of the largest producers of phonograph records at the time. And indeed, the medium used in Brunot’s lab was the Disc Pathé Saphir (see image--from Gallica's presentation of Les Archives de la Parole). Sieburth succinctly summarizes the conditions of production of Apollinaire’ recordings here: 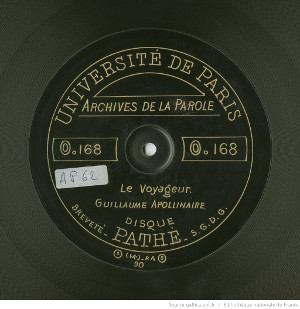 “Brunot in 1912-13 recorded examples of patois in the Ardennes, the Berry, and the Limousin as well as samples of the ‘street language’ of Parisian workman—first steps toward his ambitious project of producing a “linguistic atlas” of France on the phonograph.   To illustrate ‘la parole au timbre juste, au rythme impeccable, à l’accent pur’ (i.e. high standard French), he also recorded the speeches and lectures of various French politicians, university professors, clergymen and other public figures (including Dreyfus and Barrès).  Brunot’s most celebrated recordings, however, were devoted to contemporary poets.  On December 24, 1913 (that is, later in the same year that Pound visited Rousselot’s laboratory), he recorded Paul Fort, André Billy, André Salmon, and Guillaume Apollinaire…1913: modernism meets the phonograph.”

This is interesting for a number of reasons. As I’ve written about before, two of the earliest poetry audio archives in America, Columbia’s Speech Lab Recordings and Harvard’s Vocarium Recordings, were both born in speech labs, built for the study of American dialects, in the early 1930s. Unlike Brunot’s corporate sponsorship, though, the American archives were created in response to American record companies’ refusal to create recordings of poets. The Speech Lab Recordings, in particular, was founded with an anti-corporate manifesto. The series’ founder, the linguist W. Cabell Greet, metaphorically nailed the following to a virtual church house door after Victor Records refused to produce records of Vachel Lindsay reading his poetry, citing the insufficiently commercial nature of poetry: “Without the help of any corporation who should help us, we will issue a commercial release of the Vachel Lindsay records” [1]. Not only did Greet and his colleague George W. Hibbitt release the Lindsay Records (available in PennSound), but they went on to found The Speech Lab Recordings, which would distribute recordings of Gertrude Stein, Edgar Lee Masters, T.S. Eliot, Robert Frost, and many other poets to schools on a subscription basis—all of this in stark opposition to the commercial record companies. 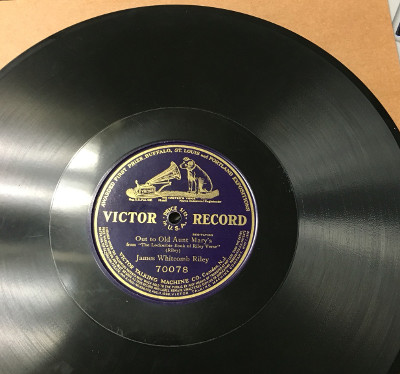 Of course, Brunot was operating not just in a different place but also a different time, nearly twenty years before Greet, Hibbitt, and Harvard’s Frederick C. Packard. In America and contemporaneously with Les Archives, Victor Records did make some investments in poetry. In 1912, they bore the expense of sending a recording engineer to the Indiana home of the Hoosier Poet, James Whitcomb Riley, to record the elderly poet on a phonograph. (We hope to soon add these recordings of Riley to PennSound.) The 1950s, particularly with the birth of the Caedmon record label, would see a resurgence in the interest of record companies in distributing poetry. Perhaps we can consider the infancy of commercial recording, during which Brunot and Victor were producing their poetry records, as a period preceding an interregnum spanning both of the World Wars and ending with the founding of Caedmon, an interregnum that Greet, Hibbitt, and Packard would step in to fill. In any event, these recordings of Apollinaire are crucial, not just for their aesthetic significance, but for their place in the media history of recorded poetry.

It is fascinating that the birth of the poetry audio archive in Europe, in linguistic speech labs, framed by sociolinguistic and phonetic questions about language is nearly identical to the conditions from which the American poetry audio archive was born, nearly 20 years later. How much of a relation we can draw between the particular brands of linguistics (prescriptive vs. descriptive, etc) and the poetics of the poets recorded is an open question. In other words, how do the politics of the linguists align with the politics of the poets they recorded? We do see resonances of Flaubert’s “le mot juste” in the quote from Brunot cited by Sieburth (“la parole au timbre juste”), and this does seem like a pivot point with Pound’s poetics. While certainly not every poet recorded in the early 20th century espoused a poetics as empirical as Pound’s, I do believe that it is worth asking, for each individual poet recorded in a speech lab, how his or her poetics do extend or complicate the scientific aesthetics that underwrite their respective conditions of production--in the same way we would ask how the politics of a particular textual venue (e.g. a journal) align with the content published in it.

While poets like Tennyson and Browning may have the distinction of being the earliest poets to preserve their voices as sonic inscriptions, Apollinaire, like Lindsay in America, holds the distinction of being a key agent in the birth of the practice of preserving poetic performance. Perhaps his desire for formal innovation, which is most apparent in the typographical innovations of his Calligrammes, was the impetus that drove Apollinaire to create more media-rich versions of his poems by collaborating with Brunot. Such was certainly Lindsay’s inspiration in seeking out Greet. Regardless of whether poets were drawn to speech labs in an empirical pursuit for le mot or la parole au timbre juste, or whether they were seeking to preserve something closer to the essence of their poems than their textual manifestations, these speech labs came together to form a transatlantic epicenter of poetic innovation. And these recordings of Apollinaire should be recognized for their place toward the beginning of a 125-year+ lineage of recorded poetry.

This post is dedicated to Mark Liberman, who introduced me to the fascinating and groundbreaking linguistic research that occurred in France in the early 20th century. My goal in writing this brief note on the provenance of the Apollinaire recordings is to begin to crystallize some ideas that I hope to work into my dissertation, which focuses on the sociolinguistic birth of the poetry audio archive in America. My hope is to write a "precursors" chapter that will explore Rousselot's and Brunot's work in Europe, leading up to Greet & Hibbitt's and Packard's work in America.

The image collage used in the header of the essay is made up of four images: 1) the background image of the phonoscope output (which is also the first image in the text) is from Richard Sieburth's essay, "The Sound of Pound: A Listener's Guide"; 2) the left-most image is of Apollinaire after his injury during World War I; 3) the center of the image (and the second image in the body of the text) is a picture of the Apollinaire record made by Brunot, from Gallica's presentation of Les Archives de la Parole; and the right-most image is Jean Metzinger's 1911 "Etude pour le portrait de Guillaume Apollinaire." The image of the Riley record was taken by me.