Artists: We will pay much of your rent

Through our ArtsEdge residency program, we will give you a place to live and work — and will pay half your rent! 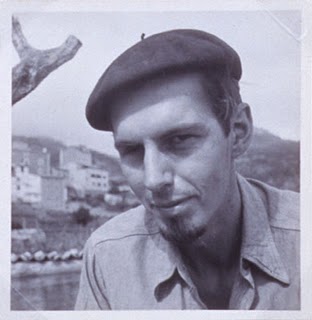 Robert Creeley, "I Know a Man"

Robert Creeley's "I Know a Man" is in many ways a signature poem. Few poems we choose to discuss on PoemTalk are such. Many are downright unrepresentative. This one might indeed be unrepresentative but if a person knows just one Creeley poem this is probably it.

It's been much written about. In The San Francisco Renaissance Michael Davidson explores the "Beat ethos" with a detailed reading of "I Know a Man." Similarly, PoemTalkers Randall Couch, Jessica Lowenthal and Bob Perelman find beat here--but also its counterargument, and/or a rejoinder to its dark depth and to the beat propensity for driving nowhere (or somewhere) fast. Robert Kern in boundary 2--a 1978 essay--finds postmodern poetics in the Creeleyite anthem: in a nutshell, composition as recognition. Cid Corman (himself the topic of an upcoming PoemTalk) finds and commends the "basic English" of the poem, comparing it with a "more refined" and less effective poem on a similar topic by Louis MacNeice. Walter Sutton back in '73 drew a line of influence from Charles Olson's poetics to Creeley's "laconic" and "spasmodic" lineation and rhetoric.

The PoemTalkers talk about this remarkable instance of eloquent stammering. The stammer is perhaps the apt way--since form is never more than an extension of content, and vice versa, after all!--of heading into the surrounding mid-1950s darkness, only to be brought up short by the actual needs of the actual American road. It is not a resolution and not a capitulation, but an assertive and possibly ironic (funny, anyway) means of bringing up short. Or, in short: more stammering.

I Know a Man

As I sd to my
friend, because I am
always talking,—John, I

sd, which was not his
name, the darkness sur-
rounds us, what

can we do against
it, or else, shall we &
why not, buy a goddamn big car,

drive, he sd, for
christ’s sake, look
out where yr going.

Our friends at the Poetry Foundation have listed and linked all episodes of PoemTalk here. And, as always, one can subscribe to PoemTalk through the iTunes music store; simply type "PoemTalk" in the Music Store search box.

There are, at last count, eight different recordings of Creeley reading this poem - all to be found, along with much more, on PennSound's Creeley author page. Not long after his father's death, Will Creeley brought to us boxes of reel-to-reel tapes, which we have gone through carefully, digitizing, segmenting, identifying poem by poem.

A New Zealander among us 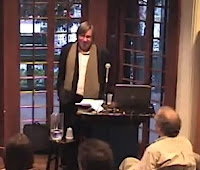 Wystan Curnow, art critic and poet, spoke at the Writers House this evening on curating as a critical 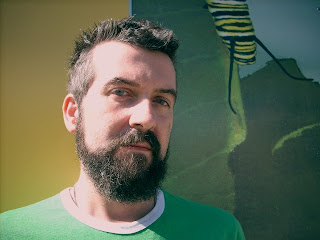 Frank Sherlock read from his poetry recently at the Writers House.