PennSound is an online archive of recordings of modern and contemporary poets housed at the University of Pennsylvania. 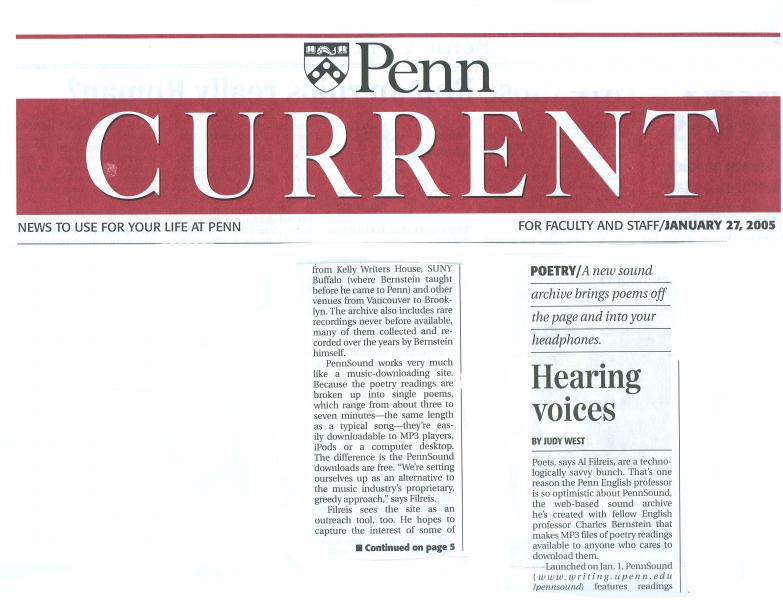 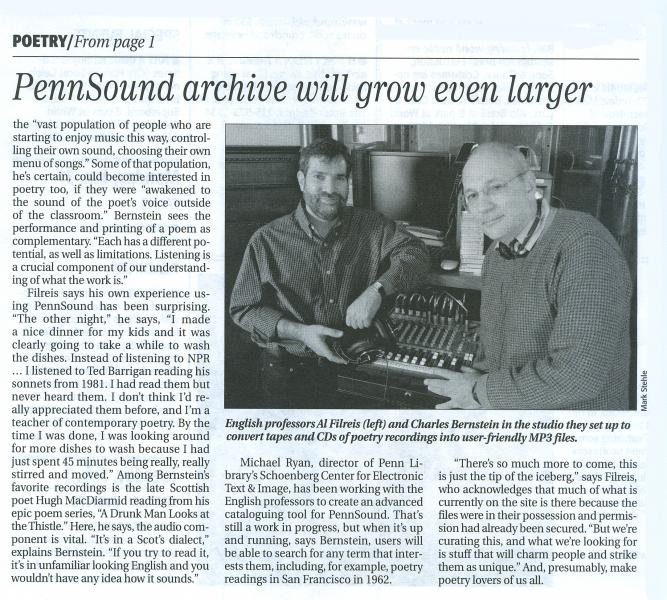 Robert Creeley recorded Ted Berrigan’s May 6, 1968 reading given in Buffalo. And Creeley gave the introduction (although, unfortunately, whoever was monitoring the tape recorder while Creeley got up to speak, only caught 27 seconds of the statement). This is the earliest recording of Berrigan currently in the PennSound archive. After his death, Creeley’s many, many recordings have been made available through PennSound. This 1968 Berrigan reading, now newly available on PennSound’s Ted Berrigan page, is one of the most remarkable poetry events Creeley documented.

Thanks to the scholarly sleuthing, the archival negotiating, the digitizing, the uploading and filenaming, and the context-setting of Chris Mustazza, PennSound is now adding eight audio recordings of Harriet Monroe — the founding editor of Poetry and one of the crucial figures in the editorial acceptance and promotion of modernism in the U.S. — made in 1932.

PennSound is now making available a new page of Vachel Lindsay recordings — many dozens of them. They are some of the oldeset materials in this archive. The editor of the Lindsay page is Chris Mustazza. He has described the project under whose auspices these recordings were first made onto aluminum disks. They were subsequently dubbed to reel-to-reel tapes by the Library of Congress in the 1970s. These digitizations are made from the reels, which are stored at Columbia University. We at PennSound are grateful to our colleagues at Columbia for making these unique recordings available. This is far and away the largest collection of Lindsay recordings.

Video and audio recordings at PennSound

In 2009 and again in 2010, I invited six poets — each year, so twelve total — to teach one poem each to high-school juniors and seniors. Each session lasted twenty minutes. And we preserved all twelve sessions as video and audio recordings. Go here to watch or listen to them. The poems were:

The earliest known recording of William Carlos Williams reading his work was created on January 9, 1942, as part of a collaboration with the National Council of Teachers of English (NCTE) and Columbia University Press. The recording is currently available at PennSound,  the largest collection of poetry recordings on the web, which is based at the University of Pennsylvania and directed by Al Filreis and Charles Bernstein.

My wife and I first met Amiri Baraka in November 1997, standing in line to get our tickets to a Betty Carter, Joshua Redman, and Maria João/Mario Laginha concert at New Jersey Performing Art Center in Newark. Baraka was directly in front of us! Both Amy and I had been readers of his work since college, were aware of his intensity, and struck up conversation with him. I explained I had been a student and friend of Ginsberg’s, and that I was living and working in Newark. He told us about monthly salons he and his wife Amina hosted at their home, Kimako’s Blues People, gave us his card, and invited us to come over — which we did many times during the next few years.

Recently we found a recording of Ted Berrigan’s reading at Bard College in Annandale-on-Hudson, December 15, 1982: it had not been segmented yet, and naturally we were curious to know which poems he performed on that occasion. Thanks to Anna Zalokostas, Berrigan's PennSound page now includes links to the individual poems, as well as, of course, the whole recording. Here are the segments:

In audio practice I

I bought my first purposeful audio recorder, a simple handheld Sony cassette device, a week after completing Naropa’s Summer Writing Program in 1986—planning to use it as a composition tool, to “compose on the tongue” in Ginsbergian terms. Ginsberg described, in one of our classes, his successes and failures in using a recorder to “write” [see his Composed on the Tongue, Grey Fox (1980) for some discussion of his practice in this area]. His notion, writing-by-dictation, seemed compelling: I was about to embark on my first cross-country road trip so I imagined imparting my own observation dictations à la Fall of America. Little of substance came from that experiment, though I later ended up using that recorder to document some readings and band rehearsals; quality of these tapes, which I still have, is not good—this was rudimentary recording tech and cheap cassettes barely sustaining documentation.