Frost's poetics and the mending wall

One October 11, 2012, I hosted a debate on Robert Frost’s “Mending Wall.” Well, not quite a debate, but I knew that I, sitting in the middle of four poets, would be on the fence, as it were, with two on a side.  The live webcast, hosted by the Kelly Writers House, was associated with the 36,000-person free online course "ModPo," and was viewed synchronously by dozens in the room with us and thousands watching digitally around the world. We made a recording immediately afterward, and have posted it to YouTube here (1 hour, 9 minutes). (And here is a recording of Frost performing the poem. We began our discussion by listening to it; the performance is certainly important to at least the beginning of the debate.)

The differences between the sides, two versus two, didn't really emerge until the end of a fascinating discussion, but they did indeed emerge, Rachel Blau DuPlessis first finally expressing concerns about the attitude of the poem’s speaker, then Bob Perelman joining the view, pointedly. To be sure, all four poets — Bob, Rachel, and John Timpane and Taije Silverman — spent much of the time assembling a full close formal (and meta-poetic) reading of the poem. Its thematics — and politics — derived, as is apt, from the poem's quality as itself an instance in form of the speaker's impulse to have and also to keep apart from the stilled human object of his beautiful but empty annual cultural rite. Later John Timpane thought some more about his own position on the poem’s speaker; I'm pleased that he has given me permission to publish his statement here.

ModPo on 'The Today Show'

A 6-minute segment on ModPo was aired on The Today Show on Monday morning, December 10. Later it was made available through the MSNBC web site here.

Modern poetry: An effect on my open-ness

An open letter by Daniel Bergmann

Note: I met Daniel Bergmann through my 10-week free and open online course – “ModPo,” a study of modern and contemporary American poetry taught through a collaboration of the University of Pennsylvania and Coursera. He was one of 36,000 students. He submitted his first essay — a close reading of “I taste a liquor never brewed” by Emily Dickinson — and it was a fine short essay on the poem. I happened to comment on it; I don't comment on all the essays, I can assure you, but I happened to notice Daniel's and thought it noteworthy. The student on the other end of my comments, posted to the ModPo discussion forum, was ecstatic. So were his parents, a New York-based film-maker and a sculptor. They were aware of this teacher-student exchange because one of them helps Daniel communicate through an iPad configured with special software enabling Daniel to type one letter at a time with one finger. Daniel doesn't speak and indeed he had never written an essay before. It took him a long time. The affirmation pushed him further. He kept up with the course and became one of the most widely recognized participants. He and his parents visited the Kelly Writers House to join us for a live webcast session — to be in the in-house audience for what is otherwise a virtual synchronous gathering hosted through Google Hangout/YouTube and enhanced by twitter and our virtual forums as well as a phone line. Daniel enjoyed that, stayed for my afternoon Penn class on the same poetry, and then spent some time with me in my office at the Writers House (photo above). He returned for the final webcast session and there met a number of his classmates. At the end of the session, when people were invited to create two-word poem-like sayings to summarize the experience of this experimental course, Daniel actual spoke into the microphone — haltingly, but clearly: “Not impossible” was his poem. I challenged him to write about his ModPo experience, and, although it took some time, he has done it.  He wrote the words you find below.  He is also writing an essay, which I hope to publish in Jacket2, on Ron Silliman's prose-poem “BART,” about which Daniel has a lot to say. He has tasted a liquor never brewed — fine, discerning writing — so it is hardly surprising that he is enebriate of this new air. 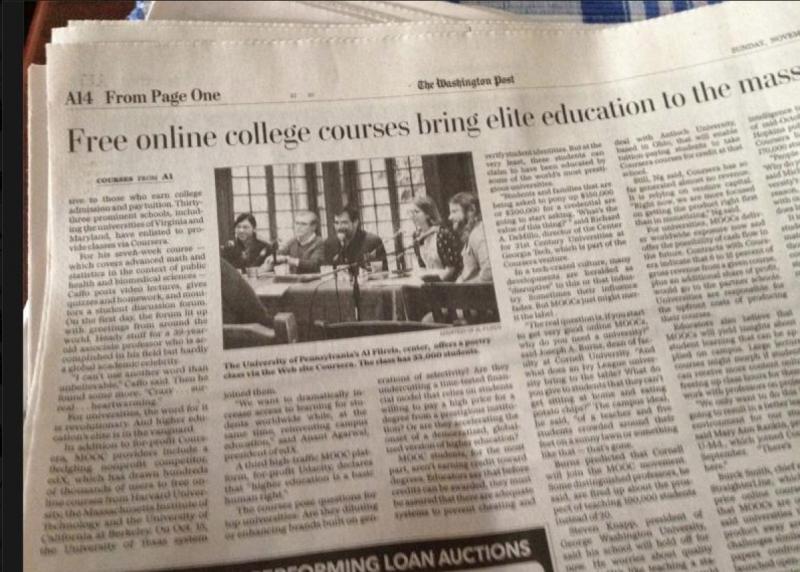 Wildly over the top, but charming and fascinating: http://bit.ly/Oijddm. ModPo will change the world, she says. I'm heartened by what she says about class, and by this: “Granting access to knowledge to everyone, anywhere in the world, no matter their level of education, or motives for learning, is downright revolutionary” and “I’d call it one of the greatest humanitarian efforts we’ve seen. So when class starts just a few hours from now, Indeed my world will change forever.”

[From a commentary published in Psychology Today:]

Yes it's true I have studied modern poetry before — in the normal small-class setting. Cappucinos and berets optional.   At Bennington, at Boston University and Breadloaf. But I've never taken a course taught by a UPenn professor, with a class size of 28,000. And counting.

The class I am about to take, it starts on Monday, is one that is offered by Coursera. And what is Coursera? Coursera is the new world baby. It's an online college (kind of) offering free classes to anyone anywhere. (coursera.com) Classes taught at Stanford, Duke, and obviously UPenn. Top of the line. FOR FREE. That's right. The best things in life are free. If only Abbie Hoffman were still alive to see this. He'd be grinning ear to bearded ear. So would Walt Whitman for that matter. I guess you can tell I'm excited.

I'm not the only one champing at the bit for Coursera’s Modern Poetry class (or ModPo as dubbed by its professor, Al Filreis). Turns out there are over 3000 of us tweeting on Twitter, and getting responses from our teacher! And he's stoked too. A life of the mind has never seemed so connected to the world. I get to read Emily Dickinson and yes Walt Whitman and even John Cage and I get to write essays and takes quizzes and if it all goes well I will get a certificate of completion. It's too soon to say but I'm saying it anyway. This may be the solution for anyone who wants a do-over on choosing a major, or has finally found the time to dig into something they love but could never fit into a “required” courseload, or it may be the solution for those of us who never wanted college to end. Maybe the answer is never finish. Never stop learning. Turn your life into a growing patchwork quilt of classes taken, certificates earned. And who knows? Maybe Coursera will find a way to give out degrees. Crazy? So is talking to your iPhone and getting a response.

[read the rest of the article]

The wisdom of crowds comes to modern poetry

A week before the 10-week ModPo course begins (current enrollment, as of this moment: 28,000 people worldwide) several thousand of those in the course are already talking in a Facebook group and on Twitter. We were discussing a poem by Emily Dickinson. People began saying things about the poem that in all my years of reading and teaching it I hadn't thought of. Then I posted this, above (apologies for the enthusiasm).

For further information about the course: link. To enroll, click here. ModPo begins on September 10, 2012, and continues for ten weeks. As of the date of this posting, 24,600 were enrolled. Roughly* half live outside North America.

* We have scant data on enrollees. Once the course begins, we will ask participants to fill out a short (obviously optional) survey and hope to learn why so many are taking the course, where they live, etc.