Gertrude Stein and the iterations of the book

In our digital age, the printed book is often seen as resisting the immateriality and inauthenticity of the digital text through its “aura,” “singularity,” “authenticity,” “materiality,” and “bookness”––to cite some key terms from a conference on the future of the book that I attended last year. Even book versions that sit alongside versions in other media––what Marjorie Perloff terms “differential texts”––seem to stress the differences between the book and digital media and so each medium’s materiality.

Yet in a range of poetic practices developed in response to the age of mechanical reproduction and to our digital age, the book becomes a site for exploring––rather than resisting––reproduction and iteration. In the final posts in my “Iterations” commentary, I want to focus on the dual role of the book as both material object and copy, beginning with the work of modernists such as Walter Benjamin and Gertrude Stein before turning to some recent iterative texts that challenge the commonplace contrast between the singularity of the print and paper book object and the repeatability and mutability of the digital text.

The rise of new technologies of mechanical reproduction in the modernist period heightened attention to the book as copy, both in terms of the aura and materiality of the individual copy and as a reproduced non-original object. Gertrude Stein played with these two possible ways of looking at the book through her own press, the Plain Edition, which she used to publish a number of her works in the 1930s.

1936 review of 'Narration' by Gertrude Stein

Gertrude Stein was not always revered as a muse of literature. Far from it. Her climb to fame was long and arduous.  The English surrealist Huge Sykes Davies dropped this boulder in her path.

“In fact all Miss Stein’s old virtues have forsaken her. The trick of constant repetition which gave pleasure when it was used in prose with no rational end, for purely aesthetic purposes, has adapted itself very ill to the making of statements with meaning. It is bad enough to hear a silly theory advanced once, it is agony to hear it advanced twenty times in quick succession.”

Rose is a rose in python

Jared Nielsen has created a series of videos in which he rewrites modernist poems as Python programming language scripts. His character — intended to engage children in this experimental poetry-programming — is Guido the Python. Click here for a link to the site and access to the video of the Stein piece. 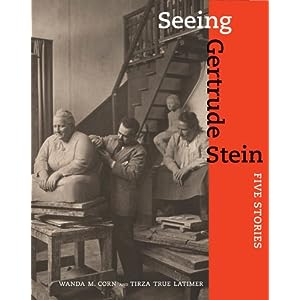 Wanda Corn and  Tirza True Latimer's  Seeing Gertrude Stein: Five Stories (the catalog and exhibition) makes a compelling case for Stein as the genius (or possibly genie) behind the many portraits of her, which Corn sees as a striking act of self-fashioning – creating a remarkably legible body of work, popular and iconic, to accompany her allegedly illegible writing. Before hearing Corn's lecture in Paris last year, as part of the Stein Collects show, I hadn't thought of the portraits as a discrete body of work. But now I am convinced that Stein recognized the significance of the photographs, paintings, and sculptures for putting into views a set of identities that are as much a part of her work as The Making of Americans. With that in mind, Corn was able to identify distinct sets of images and it is apparent that Stein recomposed her image over her lifetime. There has been a fair amount written about Stein as celebrity. What interests me here, though, is something slightly different: Stein as image fabricator, who used the portrait as a way of supplementing her writing (in a similar way to how The Autobiography works in tandem with its looking glass other,  "Stanzas in Meditation").   Stein was acutely engaged with verbal portraiture, from her early word portraits on (and in the Making of Americans as well). These images, created for widely different purposes by many different artists and journalists, became, for Stein, portraits by other means. 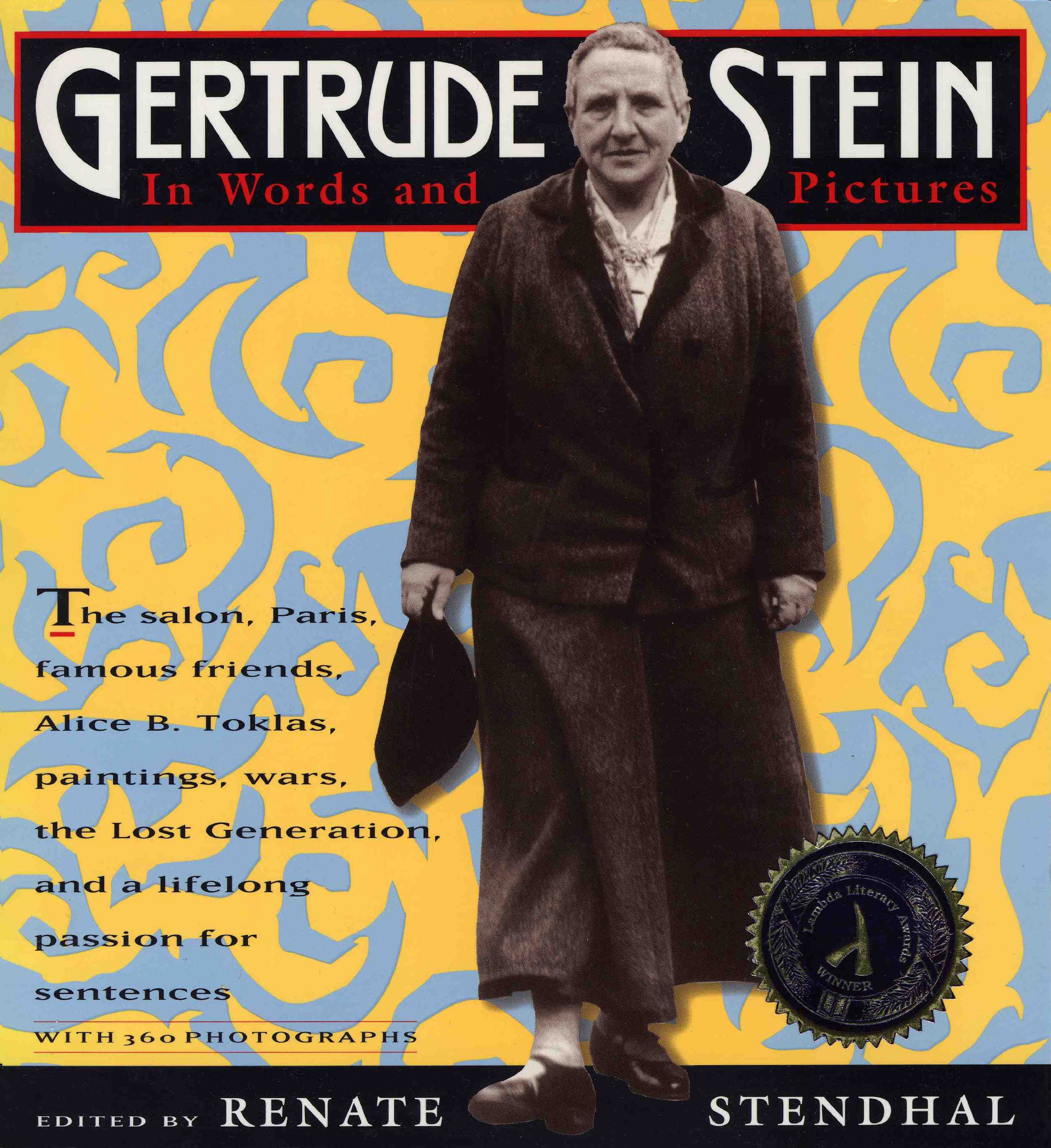 The  Stein portraits collection by Renate Stendhal is the pioneering work on this subject. It  has many more photos than are presented here or are otherwise on-line and which established the significance of this body of work.

Richard Baker showed his paintings of book covers at a show that opened tonight in Provincetown at the Albert Merola Gallery. Gertrude Stein covers were featured, including four different editions of the Autobiography and the cover to the LP (hear the recordings on the Stein PennSound page).

Three Compositions on Philosophy and Literature (1972)

Forty years ago, during my last semesters of college, I wrote a senior thesis on Gertrude Stein’s Making of Americans, which I read in the context of Ludwig Wittgenstein’s Philosophical Investigations. I had concentrated in philosophy at Harvard even though my interests were primarily literature and art (poetics and aesthetics). I didn’t know anyone who had read Stein but was surrounded by philosophers deeply engaged with Wittgenstein. Still, I saw two key issues that Stein addressed in her early work that related to the philosophical problems that echoed through Emerson Hall, where Stein herself had studied with William James.

Throughout The Making of Americans, Stein confronts the problem of what she calls “the real thing of disillusionment”: a sense of being a stranger, queer, to those around her; the sinking feeling that one is not, and perhaps cannot be, understood, that drives you to cry out in pain that you write for “yourself and strangers,” in Stein’s famous phrase. Stein’s formulations struck me as being connected to the problem of other minds, or skepticism, a virtual obsession of Stanley Cavell in those years. It seemed to me that Stein and Wittgenstein had crafted a related response to skepticism.

The related philosophical issue that Stein’s work addresses is the nature of meaning and reference in verbal language: how words refer to objects in the external world. Both Wittgenstein and Stein dramatize the breakdown of a one-to-one correspondence between word and object. They are both averse to the conception that words are akin to names or labels and that meaning is grounded in a verbal mapping of a fully constituted external world. What do words or phrases designate? This goes beyond the issue of private language, which has dogged the interpretation of Stein’s work. The problem of where the pain is when pain is expressed opens up for Wittgenstein and his interpreters (for me primarily Rogers Albritton and Cavell) a more general problem of the nature of reference, designation, and naming for such intangibles as (in Stein’s words) “thinking, believing, seeing, understanding.” I felt, still do, that this philosophical conundrum directly bears on the meaning and reference of not just words or phrases in poems but of poems themselves, which certainly mean, designate, and express, but do not necessarily refer to “things,” if things are assumed to be already existing and named objects. I am not satisfied with the argument I make about the nature of reference in the final sections of The Making of Americans and Tender Buttons, where Stein invented a compositional method that I call “wordness.” Still, despite the manifest shortcomings of this work, it locates some ongoing problems that remain to be addressed, both in terms of a full-scale reading of The Making of Americans and a more technically robust account of reference in works such as Tender Buttons.

Looking back, I am aware of how circumscribed my frame of reference was in 1971. I am content here to play straight man (third Stein) to Stein and Wittgenstein, those diaphanously queer, secular Jews born just fifteen years apart.

A dossier edited by Charles Bernstein

Over the past several years, Gertrude Stein’s war time record has been subjected to a stream of misinterpretations, distortions, and disinformation in the mainstream press. Most of these articles are written by authors who are hostile to Stein's literary works and who admit to their inability (and unwillingness) to read her work, including the works by Stein that directly address the issue at hand. In this Stein dossier, key documents are provided that refute the sensational tabloid accounts of Stein's activities, views, and affiliations during the war  years, when  she and Alice B. Toklas lived in Bilignin, France (near Lyon and Geneva). Stein's  connection to the Vichy government is complex and these complexities are fully explored in the essays and articles linked here.

Edward Burns, in his essay published for the first time as part of this dossier, writes that “the translation of Pétain’s speeches has preoccupied Stein’s detractors in recent years; they have used it as the wedge (along with a clearly ironic remark about Hitler’s deserving the Nobel Peace Prize) to denounce her — the denunciation by extension extends to her literary works.

A version of this paper by Edward Burns, titled “So I Went on Looking at Pictures: Gertrude Stein’s Last Decade,” was delivered as part of Sundays at the Met, April 29, 2012, in conjunction with the exhibition The Steins Collect.

Joan Retallack on Stein's war years from her introduction to "Gertrude Stein: Selections"

(The "Stein and History" section of Retallack's  introduction is available as a pdf here.  She wrote this headnote for the Stein dossier.)

'The Dada Letter,' from 'Collected Poems,' in progress

One afternoon in northern Europe, probably in the year 1939, a boychild one now sees wearing a blue velvet Little Lord Fauntleroy suit with lace collar and cuffs, is walking down a chiaroscuro corridor in a haut-bourgeois six-story apartment building —

What Dadaists are still alive are dealing with their life-movies in various ways, suggested by other labels: