Nico Vassilakis on the poetics of looking

Pleasure in viewing is a pleasure to think freely, visually, without destroying it with interior chatter. (from Notes 3: for Martín Gubbins)

What can you say about seeing? It’s wonderful, well, that’s not nearly enough. Try as you might, and thousands have, to describe the joyous nature of seeing...It’s a passage from the thing through the eye into the brain. Seems like a fantastically long journey where anything can happen. And it does. And no one ever seems to really be there. No one ever gets it right, so we continue to look, to stare. (from Staring Poetics Appendix One.)

A conversation with Nico Vassilakis about reading, looking, and visual poetry where my questions are invisible.

Perhaps I state the obvious when I write of staring at the alphabet and watching letters dislocate. Few vispoets write about what they do, even fewer about how they see.

The alphabet has a tendency to transmogrify when stared at long enough. It unravels and informs the viewer/reader of its simultaneous realities, that is, the housing of both visual and verbal elements.

Icelandic artist Ragnhildur Jóhanns’ work exists in the liminal space between book and art, between reading and looking, but perhaps, most significantly, because much of her work is so tactile, between looking and touching.

But doesn’t the experience of reading books always involve touching? We touch with our eyes. We look with our fingers. Books are also anthologies of touch. Their bindings, pages, paper, print. Holding a book. Turning its pages. We feel the paper – its texture and thickness. As my niece once exclaimed, “Wow! Its pages are paper thin.”

When we engage with written language, we feel each curve or angle of letter. Some books are the size of a sparrow, some are eagle-sized.

Narrative in the visual poetry of Satu Kaikkonen

Satu Kaikkonen is a prolific and protean poet from Finland. She writes that “I'm a storymaker and this is seen in the narrative aspects of my vispos. Each series is like [one] continuing poem and the individual vispos are its verses.”

In this commentary, I’d like to focus on two ‘verses’ from her Grey and Yellow Series:  “Sisters” and “A Grandmother.”

The images are two vignettes or mises-en-scène. Chekovian tableaux in abstract space. A subdued grey background. A chair or two.  One chair remains in the identical place. One is added or removed.

Outsourcery: biography by any other's name

kevin mcpherson eckhoff's 'Jumble' from his 'Their Biography'

A conversation with kevin mcpherson eckhoff where I speak in italics and he speaks in normal.

The end of the soul is synonymous with exceptions. Synonyms are a kind of rhyme. Relationships dynamic create errors of within, and this betweenness of everything is a reality field of meaningful electrons. As a human invention, poetry mitigates such betweens. I suspect bpNichol may have seen poems as such halfway points. The not-quite-you plus not-quite-me is what breathes within the enclosures of words. Words are actions. Actions alone won’t save us. Redemption isn’t a hidden MEaning or a hidden YOUaning, but an ever-apparent WEaning. Spoiler alert: I cheated & read ahead!

Fabulist of the surface

Márton Koppány and the shimmer of meaning

Márton Koppány’s deceptively simple images, are comprised of the small visual symbols of our modern life: yes, ellipses, quotation marks, and speech balloons, but also everyday objects such as a chair, a fish, some sunglasses. But he doesn’t attempt to represent these things, but rather presents simple photographs of them. It’s our clipart-world, our JPGscape. And these images — from the language of words or the language of visuality — play together on a flat field comprised of simple unmodulated colours. They live in that unhurried purgatory of the semantic present, living out the relationships of unworried signs in an semiotic utopian playground without hierarchies.

Inking outside the fox: type writing itself

Barney and Betty Rubble go to the Grand Canyon and send a postcard back to Fred and Wilma Flintstone. Fred and Wilma aren’t too impressed by the canyon but think the notion of a ‘postcard’ is a pretty neat idea. (I read this in a poem long ago. Unfortunately I can’t find the source. Send me a postcard if you know.)

Over the years, the typewriter has been important for visual poetry. For example, Dom Sylvester Houédard’s typestracts. Or Steve McCaffery’s monumental Carnival.

John Wieners, 'The Acts of Youth'

Ammiel Alcalay, Gary Barwin, and Danny Snelson joined Al Filreis to talk about a poem by John Wieners for which we at PennSound have two recordings. The version used as the basis of this PoemTalk discussion was part of a brief two-poem performance at the Poetry Project in New York, in 1990. (He also read "Confidence" that day.) “The Acts of Youth” was written in the early 1960s and published in Wieners's second book, Ace of Pentacles, in 1964.

John Wieners, "The Acts of Youth"

Ammiel Alcalay, Gary Barwin, and Danny Snelson joined Al Filreis to talk about a poem by John Wieners for which we at PennSound have two recordings. The version used as the basis of this PoemTalk discussion was part of a brief two-poem performance at the Poetry Project in New York, in 1990. (He also read "Confidence" that day.) “The Acts of Youth” was written in the early 1960s and published in Wieners's second book, Ace of Pentacles, in 1964.

Gary Barwin traveled from Hamilton, Ontario, to spend the day at the Writers House the other day. Gary is a poet, fiction writer, composer, and performer, whose many books of poetry include The Porcupinity of the Stars (newly published), Outside the Hat and Raising Eyebrows (all from Coach House), and whose music has been performed by, among other groups, The Vancouver Chamber Choir, The Bach-Elgar Choir, and by the Windtunnel Saxaphone Quartet. Along with Danny Snelson and Ammiel Alcalay, we recorded a session of PoemTalk on a poem by John Wieners. Then I induced Gary into an hour-long recording session for PennSound. And now, already, lo and behold, we have a new Gary Barwin author page at PennSound: here. I had first met Gary at Banff a year ago and enjoyed his company a great deal.

Gary is also the Serif of Nottingblog - which is to say, runs a blog going under that title. He blogs on average once every other day. I recommend it as a digital destination. 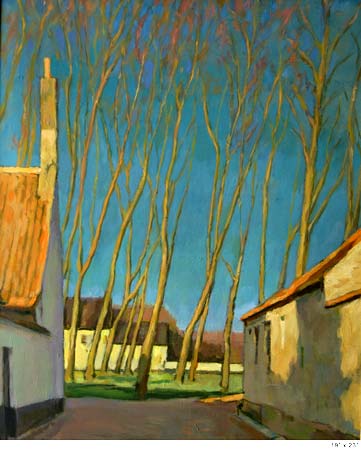 Gary is Jewish, and the family's path runs like this: Lithuania, South Africa, Ottawa. His Lithuanian family fled the holocaust. His great-uncle Isaak Grazutis is a holocaust survivor, and also, now, a painter. "In 1941, at the age of eleven, Isaak was forced to flee his native village in advance of Nazi occupation. After his parents were taken away by the invading forces, he was brought to live in an orphanage in Ural, and later, Moscow where he spent his formative years." Here is much more from Gary's blog. At right you see one of Isaak's oil paintings.