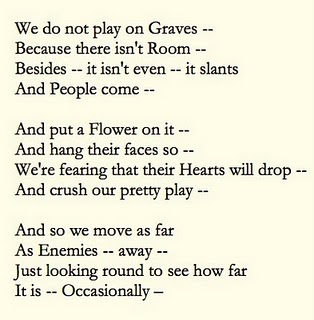 New York Botanical Garden’s upcoming exhibition, Emily Dickinson’s Garden: The Poetry of Flowers. The show is on display April 30 June 13, and gives visitors a new look at Emily. She was an avid gardener, and took visual cues for many of her poems from flowers such as tulips, roses, and lilies.

I'm in Banff, Alberta, attending a long-weekend-long conference called "interventions"--focused on new writing practices.I'm in Banff, Alberta, attending a long-weekend-long conference called "interventions"--focused on new writing practices. The best thing about it is that most of the presenters are practicing artists. This morning, for instance, Jen Bervin showed us several of her textile/weaving projects--one a brilliant weaving of Emily Dickinson's fascicles. Lance Olsen (an old graduate school chum) and Steve Tomasula on various forms of digital/hypermedia fiction. Fred Wah starts a talk about collaboration by talking about using tea mold for a mealtime art project. I'm meeting many Canadian writers whom I'd not known before. Erin Moure and J.R. Carpenter among them. Maria Damon riffs on connections between schmata and schema-ta, a raggy poetics, in response to the matter of the state of the sentence. Craig Dworkin (best paper, to my mind, of the conference) starts with the Poundian/imagist compression of the sentence and does exemplary literary history in a short paper. There's a ton there.  I moderated a panel on the state of reading today and tomorrow I will present a manifesto in 6 minutes. Hearing tales of the Wah-bash (the celebration of Fred Wah's retirement from active teaching near here in Calgary). Finally, after all these years, met Derek Beaulieu--a treat. Kenny Goldsmith found a moment to insert his stump speech about uncreative writing, and he chose the perfect moment. Charles Bernstein started his talk by being absent, then showed us some stunning slides of his collaborations with painters over the years. Met a young man, Mike, who lives in a cabin in northern Northwest Territory, has a satellite-enabled WiFi and uses PennSound recordings as a lifeline to the world of poetry in the provinces and states below. John Cayley yesterday used the (Brown University) "cave" (3D virtual textual environment) to draw the distinction between our seeing

objects floating before us (not "on" a surface) and our seeing words in such a scene. We just can't see the words as things. Chris Funkhouser performed the other night, sheet over head, as a dancing bounding text reflector, and played a one-string instrument his mother had bought him years ago. He's finally found a use for it. Christian Bok unveiled his new project: infecting can't-be-killed microbial life with text so that it will survive the death of readers. Writing that really lasts. As someone observed, he's gotten so far past the traditionalist's lament about writing for the ages that he's back to it. Humanism rears its viral head.

Julia Bloch and Sarah Dowling are taking good notes on everything and intend to write an article. Steven Ross Smith, organizer, says he will get us recordings so that we can put a selection on PennSound. 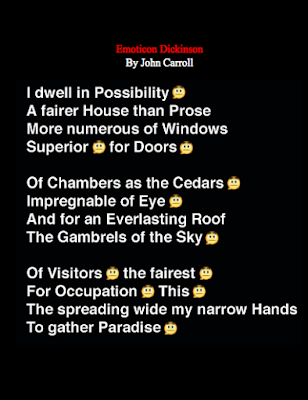 Reading Emily not quite blithely 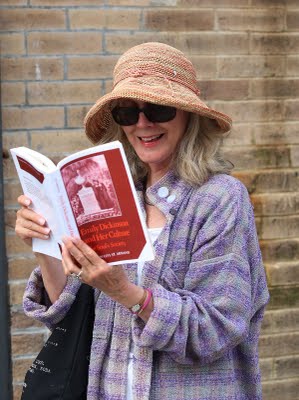 Readers of this blog will recall that Lawerence Schwartzwald often takes photographs of well-known people in the act of leading their literary lives. Dustin Hoffman reading Ginsberg. Patti Smith reading a book of criticism on Wallace Stevens.

'The Dada Letter,' from 'Collected Poems,' in progress

One afternoon in northern Europe, probably in the year 1939, a boychild one now sees wearing a blue velvet Little Lord Fauntleroy suit with lace collar and cuffs, is walking down a chiaroscuro corridor in a haut-bourgeois six-story apartment building —

What Dadaists are still alive are dealing with their life-movies in various ways, suggested by other labels: