I adore baseball in every way it’s possible to do so: see it live, play it (rarely but longingly), view it on MTV.TV, read about it. I always read at least two baseball books each summer. (One of this summer’s reads is Dan Okrent’s Nine Innings.) My interest in the 1950s of course leads me to baseball through another route — actually it’s three interests converging: baseball, the ’50s, and poetry. The best expression I know of this is Gerald Early’s essay published in the American Poetry Review in July/August 1996, “Birdland: Two Observations on the Cultural Significance of Baseball.” I put an excerpt from this essay on my 1950s site. 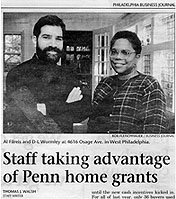 Back in 1998, my employer, the University of Pennsylvania, created a mortgage incentive plan: the idea was and is to encourage Penn-affiliated families (staff and faculty) to choose to live in Penn’s neighborhood rather than the Main Line or South Jersey. I had wanted my family to live in West Philly and this was just indeed the incentive I needed. I was the first Penn person to use the plan; probably that is why the Philadelphia Business Journal came out to the house to do a story on the program featuring my move. If one goal of this project was to induce faculty to be more present on campus and more involved in the life of the university’s neighbors, I think it surely worked in my case. The main force behind this innovative program – and the mortgage incentive system was just one part of it — was Judy Rodin, then president of the university. In the fall of ’06 I invited Judy back to Penn (she’d left to run the Rockefeller Foundation) to give a talk about the urban university. We recorded this talk, and I also produced a podcast about it.

Auschwitz: Once you're in the room, you can't get out

Daughter of an Auschwitz survivor, Debbie Fischer, asks her father, as he lies dying, to tell her the real story of his time at the death camp. He has refused to tell her much all these years, always giving a blandly positive response to life in the camp. Here is the audio recording of her testimony about his testimony.

Roger Angell offers commentary here and there throughout Ken Burns’ nine-part (or nine-“inning”) documentary Baseball. In what is perhaps my favorite of his appearances in this film, he talks about Bob Gibson. Here is an mp3 recording of it. Angell was a Writers House Fellow in 2005, and I had the pleasure of interviewing him (mp3).

He enjoyed his time with the students and the other people of the Writers House community, as he said so, generously, a few days later. Eric Karlan has written a nice summary of that interview. “Angell concluded his several-day stay in Philadelphia,” Eric writes, “with an excerpt from a piece on the 1975 World Series, the infamous Game 6 when Carlton Fisk willed the ball fair for the game-winning home run. As he does so well, the longtime New Yorker writer provides a fresh, provoking perspective on an event. He leaves the Writers House thinking about ‘caring.’ Despite being a fanatic, Angell recognizes the triviality of baseball in the grand scheme of life. And that is why, as he imagines people across New England giddy and elated at the Red Sox victory, he reminds all of us not only of how odd it is that we dream through sports teams, but how it has seemingly ceased to matter to everyone what they care about — ‘as long as the feeling is saved.’” You can hear other Angell clips (on the early Mets, on NYC as the capital of baseball in the 1950s, on Bobby Thompson’s homer, on Willie Mays, on the Red Sox 6th game victory in 1975, and on Babe Ruth’s final weekend) by going to the 2005 Writers House Fellows reading list. Listen to Angell read from his essay about the 1975 World Series.

Pound was punk to Gizzi

“I LOVE, I mean LOVE that PennSound has put up all the Pound material,” wrote Peter Gizzi to us not long after the Ezra Pound recordings were added to PennSound.

A poet starting with X

My modern American poetry site is set up alphabetically. I’ve never had a link under “x.” The spoken word poet (“I have been involved in what is now called spoken word since 1982”) Emily XYZ wrote to me suggesting that I correct this omission, and so I have.

On recorded poetry: A discussion with Steve Evans

Does the ubiquity of recordings of poets reading their own poems change the way we teach modern and contemporary poetics? On April 23, 2007, I had a good conversation with Steven Evans about this in my office at the Writers House. Here is a slightly edited recording of that conversation: this link takes you directly to a downloadable mp3 file. Steve’s Lipstick of Noise site is subtitled “listening and linking to poetry audio files.” I visit the site at least twice weekly.

At an event we called “7 Up on Gold” — featuring seven people speaking for seven minutes each about gold, the color or the element — I chose to speak about the chapter entitled “Gold” in Primo Levi’s brilliant book, The Periodic Table. I’ve taught the book a number of times in my course on the Holocaust.