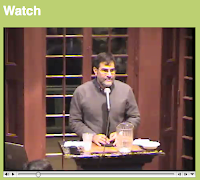 The video recording of our annual January "Mind of Winter" event--which always begins with a reading of "The Snow Man" by Wallace Stevens--is now available: here. 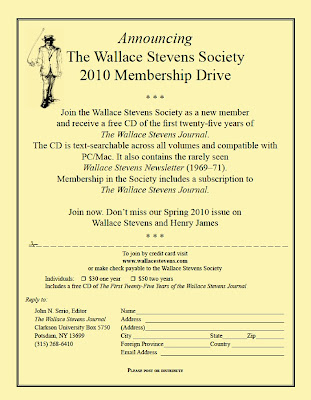 If you subscribe to the Wallace Stevens Journal now, you'll receive a copy of the first 25 years of WSJ on CD--searchable, of course. A significant resource.

I was asked to choose three of Wallace Stevens' poems to represent his entire body of work. An impossible--and perhaps irrelevant--task, but I was game. This short essay is the result, published a few months back.

An attempt at reading "The Man with the Blue Guitar" as if the poem were an occasion for vocal strumming.

The Duke University Press page for the book: link.

The abstract of my essay:

What reputation and influence has Wallace Stevens had in the years since 1975? The infamous Stevensean disaffection has tended to prohibit definitive legacy, and yet this, in the end, has been productive, forestalling closed arguments among poetics Lefts and Rights, keeping Stevens's work from theoretical alliances until past the point when such would fix its standing in contestations between, for example, theoretical as distinct from historical approaches. To the extent that Stevens can seem anything to anyone, the legacy is of little impact. The many imitations of Stevens's special rhetoric tend to riff on a single poem or idiomatic stance, quick-take attempts at posing in a particular ironic position, one abandoned as quickly as assumed. Among contemporary poets whose own writing contemplates Stevens's overall position, however, a larger pattern does emerge—two Stevenses. First, a meditative Stevens: unagonistic, verbally ruminative, romantic (but called "postromantic"), a repository of human responses, post-Christian yet lyric—a poet whose verse does not make truculent, discordant claims but rather "eke[s] out the mind," forming "the particulars of sounds." Secondly, a languaged Stevens: theoretical, serial, and nonnarrative, metapoetically radical, sometimes satirical (and antinarrative), always obsessive about the state of poetics and insisting on consciousness of the compositional mode as itself a pressure inducing the poem to be composed—a poet whose middle and late seriatic styles befit rather than reject the cyclonic modernist historical modes adopted early and briefly by Eliot, grandly and insistently by Pound, and later by Williams.

As I sat down to compose this note I proimised myself I wouldn't get worked up. Today during some somewhat relevant googling I happened up one of those Term Paper Mill sites. You know the ones. You've been assigned to write about Mercutio's relationship to Romeo and you find on the web that this company will sell you a 5-page paper on said topic. Everyone in academe (on one side of the paper-assigning divide or the other) has pondered this, at least briefly. I always assumed that if one of my students bought a ready-made paper from such an enterprise, I would notice it immediately--either because of the odd and invariably somewhat off-the-point presentation of the argument or because it would be badly argued and poorly written too.

But the price. Here's the kicker. Today, looking for a quick e-text of Stevens's poem "Mozart, 1935" (readers of this blog will know that I am somewhat obsessed with this poem)--I was too lazy at the moment to walk to the shelf for my copy of the book--I found a 5-page paper "interpreting" this poem. The cost: $59.75. I was so chagrined that I was very tempted to buy a copy and then...what?....expose? rail against? these people. What's more, the little summary reading of the poem remarkably resembles my own reading of it (in a book and at least two articles, the latter available online). Is it possible that I would have been buying a hack-job remix of my own article on the poem? (Click on the image above and left for a larger view.)

I think I would have asked for reimbursement from my university-sponsored research fund for this expense. After all, it would have been research. No?

How desperate would a student have to be to use one of these sites?

As Stevens says, "Play the present."

A political Stevens: slogans as contrivance

Some readers will remember that a few months ago I was asked by George Lensing to chose just three poems by Wallace Stevens I would most urgently commend to others. A crazy task, but I did it (because I like George, for one thing). A short essay about these three poems will soon be published in the Wallace Stevens Journal. Here is a sneak preview.