New at PennSound (site link for these recordings)

The last of the old Jackets, Jacket 40, had a 58 printed-page feature on poet Susan Howe:

Susan Howe reads from 'My Emily Dickinson' & discusses with poets

When Charles Reznikoff was a guest on Susan Howe's radio show

Recordings of Susan Howe's WBAI (NY)/Pacifica Radio programs are available at PennSound as the result of a collaboration with the Archive for New Poetry at the University of California, San Diego. Our digital copies were made from recordings housed at the archive.  On May 13, 1975, Howe went on the air with her guest Charles Reznikoff and the outcome of this session was a show titled “Poems for the Jewish Holidays.” As of today, thanks to the work of Anna Zalokostas, PennSound is making this recording available in segments, one segment each for a poem or passage Reznikoff read, following Howe's introduction.

Bruce Andrews and Charles Bernstein’s interview with Susan Howe captures their early poems and thinking about Language writing poetics: L=A=N=G=U=A=G=E was just over a year old with Number 7 to be published that month. I will investigate this formative moment for the ideas that continue to be crucial, that were effaced, and that enter into productive crisis in the present.

Andrews and Bernstein sketch the by-now-familiar program of Language writing, an invocation of writing’s “modernist project […] an exploration of the intrinsic qualities of the media […] which from our point of view is language […] not some concocted verse tradition […] through academic discourse and […] book reviewers in The New York Times.” The “repression of knowledge” through such academic and publishing institutions contributes to a deficiency in “people’s awareness of what poetry and what other writing forms there are.” In addition, Andrews and Bernstein interrogate the very idea of genre in writing and propose “less intrinsic reasons for [the novel, philosophy, and poetry to be] separate than for music to be thought of as separate from painting or painting from writing.”

David Wheatley, Nobody can bear to watch

This playlist includes recordings of authors reading the entirety of a book or chapbook. I find that longer recordings allow me to become immersed in the textures of the work, to register the ambient sonic environment, and to perceive other small shifts and variations within and between pieces. I sometimes listen to one long recording that allows me to settle into a particular mode of listening and then follow it by listening to another recording that suggests another form of attention. I like the feeling of becoming engrossed and hypnotized by a recording and then using another recording to snap myself out of the experience so that I can see the initial recording with more critical distance.

While listening to the following recordings over the last few weeks, I was reminded of Christine Hume’s review/essay “Carla Harryman’s Baby: Listening In, Around, Through, and Out” published in How2. 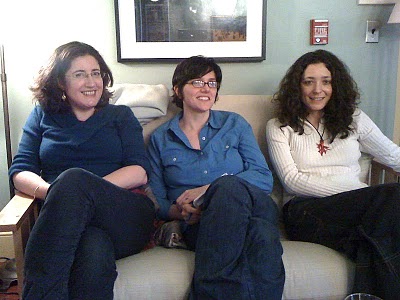 From left to right: Marcella Durand, Jessica Lowenthal, Jennifer Scappettone. They’re in my office at the Writers House, having just finished discussing Susan Howe's reading of Emily Dickinson’s “My Life had stood — a Loaded Gun.” It’s the 32nd episode of the PoemTalk podcast. Please have a listen.