Inexpert investigation in poetry opens a space: what is left open is left open. “The highly rewarded entrepreneurial strategy of forging ahead with an air of mastery no-matter-what spawns impatience for the point or gist,” Joan Retallack writes in The Poethical Wager. What get lost are “values that encourage the necessarily inefficient, methodically haphazard inquiry characteristic of actually living with ideas” (51).

Enter inexpert investigation. A poet can bring fanciful fortitude to her investigation without commandeering it. After all, the poem need not serve as the final word, but rather, as an opening up for others to engage. A poet might be attuned to unlikely connections. Situational rhymes. An alchemy of juxtapositions.

listening to the materials instead of imposing one's narratives upon them, and letting the symptoms proliferate into new forms of understanding--the telling itch, the site-specific discharge, the rash judgments, and above all, the "black spot" where the no-go zones meet flesh--one could open up the terrain for uncanny encounters with the site and its hauntings. (Buried Treasure Island 13) 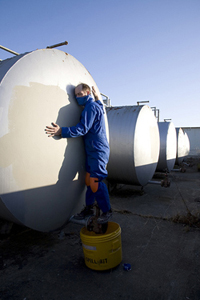 Walking on a island toxic from years of naval testing, Buuck documents his investigation with a language of ailment. His own body was altered by the investigation. He also describes how he listened to people around him:

For instance, when the window opened behind me and the voice hailed me with her version of events, to be narrated in a kind of speculative poetics that the guidebook had yet to accommodate, the feeling was not of surprise as much as the recognition that this encounter was meant to happen at exactly this juncture in the field work. (13)

Poetry already involves participation because the stuff of poetry, the language, is patched together by other people long-ago and as-we-speak. Sonorous syntax is social. But eschewing an authoritive stance, the poet conducting an inexpert investigation might make participation more explicit, actively listening to passersby, soliciting ideas from fellow walkers. Or perhaps the participation comes through documents, the investigative poet elbow-deep in archives.

While an expert stance will stultify the poem, an emphasis on participation is not sloppy, not anything-goes. The poet creates a dynamic form, gathering language into significance.

An inexpert investigation might be cast as a book, as performance, as walk, as encounter–but each enactment, each artifact, is quickening, is ready to be recast should some passerby slip a note into the poet's hand, should a naysayer mumble audibly and helpfully, should the poet look down instead of to the side, to the side instead of up…