A review of 'A Reading: Birds'

Both the name of this publisher and the first line of the book’s single poem answer each other, in their two four-syllable joinings of language to the natural world. But the words in the book are not so bare, sewn into covers whose outer life consists of light blue and white geometrical patterns that alternatively make me think of abstracted patterns of clouds and a weaving together of the world. Cranes and flowers grace the inner covers, and in the poems, a weaving of words, with little abstraction, though indicating a great and perhaps mystical geometry of nature.

The cranes flying through the fog, out of the sun into the
open valley to feed, with ducks and geese and tundra
swans, the flocks so numerous in the old days they say the
sky was darkened for hours with their passing. (9)

Always, in this book, words as well as birds. The passage above ends,

The legendary, nearly mythical abundance of that time, how to say
it or see it or imagine that time. (9)

“That time” is, at times in this lovely (in all ways) book, ancient, or prehistoric, or the time of the author’s youth (which can also be mythical in one’s mind). Seeing “the great central / valley of California [summer the first time I saw it, men tossing watermelons hand to hand into / a boxcar on the siding: Modesto?]” (7).

Time and memory give way to a presence of all-time, “Standing there in the air.” (13)

Remember, though, in this book that presents and invokes both the real and imagined natural world, the consciousness of writing such a world, the task is not just to see and note the birds but to say them, and not to say them only as an individual, but as part of the human “we.”

In such saying, we partake of literary imagining, noting, and questioning the natural world, from William Blake’s “Little lamb, who made thee?” (14) to Gerard Manley Hopkins’s “I caught this morning morning’s minion” (13), whose very movement of syllables — sprung as they are — calls to mind the flight of birds, particularly its sometimes sudden change of direction.

How does one catch a bird?

While Dahlen may not share Hopkins’s quite literal sense that the birds and all the world are “for Christ’s sake,” she manages to suggest the possibility of spiritual presence, a thisness that humans may only approach, or hang onto, in words, in language. 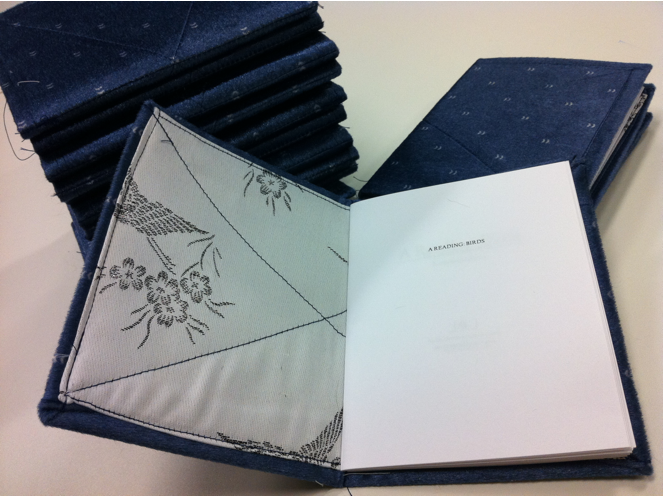 second printing A Reading: Birds, by Beverly Dahlen, May 2011

Finally as much as about birds, A Reading: Birds is about us, the humans, who are often stuck outside.

Yet collecting them in lists is not getting there, to the heart of the matter, to the meadow of first permission (as Robert Duncan, another great California poet who invokes childhood memories, might have it). We need all our words, all our imaginings, to get there. We need humility in the face of the natural world. We need to listen, as to the mourning dove.

Softly, thinking of its story,
why does it mourn. Listening. (17)

An endnote to the book presents a story told by the Yurok people of northwestern California, about how the mourning dove came to have its particular call. This tale too is an imagining that catches the bird in its words.

In writing about the work of Beverly Dahlen, I think too, as with observing the birds, I should remain quiet, reading and listening. She is a marvel to apprehend, in all her words. Why?

From 'Prayer, Rupture, Dwelling'
Singing Through The Echo
Robert Creeley
Architecture rings true
Not just to see and note the birds but to say them