Ray DiPalma, 'It makes / of nonsense'

Aaron Shurin (then just in from the Bay Area), John Tranter (visiting from Australia), and Charles Bernstein (coming in from New York) joined Al Filreis for this episode of PoemTalk to discuss a poem by Ray DiPalma, “It makes of nonsense.” The poem was written in 1976, and first performed, we think, in 1977. Our text of the poem comes from the poet, and is reproduced below. Our PennSound recording of the poem was segmented from a longer tape of a reading DiPalma gave, along with Michael Lally and Bruce Andrews (quite a threesome in those years), at the Ear Inn in New York City on November 10, 1977; the tape-recording itself was made by the aforementioned Charles Bernstein, one of this episode’s interlocutors. 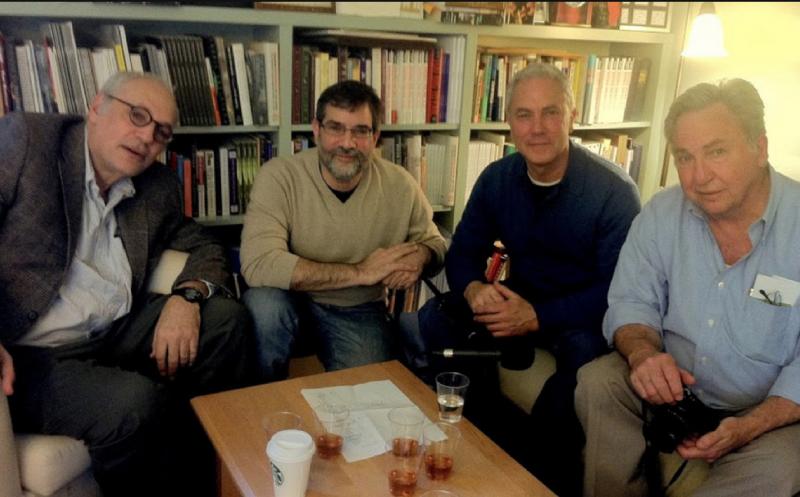 When the group encounters this passage — “the basis / of this world / the failure / of causality / common / sense is not / what hat / we find there” — we focus on “what hat,” that which we find there once cause-and-effect relations have been deemed to fail. John suggests that a reading of the passage can be straightforward, that hat is a role (as in what hat you wear to signify a job or assumed identity). Thus a “new optimism” augured by this poem might derive from a fresh sense of “common / sense” that does not make identity a function of put-on role. Charles agrees. Aaron and Al suggest a second reading, in which “hat” emerges out of “what” as language, suggesting an alternative to the traditional causality in which a word rather than a thing (“what”) can emerge from a thing, a hat pulled (as it were) out of the poem’s hat. Al and Aaron see the poem as, perhaps only in hindsight, a programmatic poem for L=A=N=G=U=A=G=E, and begin to make a list of aesthetic ideas and practices the poem recommends in very the way it is formed to say what it says. Whatever doubts about this Charles and John share, all agree that when the poem turns to cause and effect it offers a radical alternative for “it” (it being the poem or poetic project, the it that the poem makes of nonsense), so that “instead of / basing it / on cause / and effect // they built / it on cause / and perhaps.” Not cause and effect but cause and perhaps. It’s that embrace of perhaps — key to the poem’s open-endedness — that leads to its new optimism. What Deleuze and Guattari call “a concerted deconstruction of the signifier, non-sense erected as a flow,” can a positive step in our efforts to understand how language creates connection. Indeed, Ray DiPalma came across a passage from Anti-Oedipus: Capitalism and Schizophrenia by Deleuze & Guattari that, he feels, bears special relevance of the poem: "But through the impasses and the triangles a schizophrenic flow moves, irresistibly; sperm, river, drainage, inflamed genital mucus, or a stream of words that do not let themselves be coded, a libido that is too fluid, too viscous: a violence against syntax, a concerted deconstruction of the signifier, non-sense erected as a flow, polyvocity that returns to haunt all relations."

Pictured above at right, from left to right: Charles Bernstein, Al Filreis, Aaron Shurin, and John Tranter. This episode of PoemTalk was directed and engineered by Steve McLaughlin, and edited, as always, by the same talented Steve McLaughlin. Al Filreis is PoemTalk’s creator and producer. Special thanks to Nuria Sheehan and Cathy Halley of the Poetry Foundation for their collaborative efforts and support; to Jessica Lowenthal, Andrew Beal, Lily Applebaum, and others at the Kelly Writers House for space and logistical help; to Chris Martin for his constant technical acumen and fast keyboard fingers; to the thousands of people of ModPo, who generously created a fund to support digital poetic outreach and who tend to listen to the whole series of PoemTalks as if they constitute a survey course introducing contemporary American poetry.