We also live in a time of epic human migrations. By 2050, the U.N. projects, the global population will peak at 9 billion, and that same year, more than 70 percent of the world’s population will live in cities. We crossed the halfway mark (more urban than rural) in 2007.

In Somalia right now, the worst drought in 60 years, combined with one of the most dangerous political situations on the planet, has already killed 10,000 people and put 500,000 children on the brink of starvation. These people cannot migrate into the cities: their rivers have been diverted and those who try to escape imprisoned. Whether or not extreme weather patterns can be linked to human-induced climate change (globally the ten hottest years on record have all occurred since 1998), we cannot deny that the triple whammy of bad weather, neoliberal global economics and fundamentalisms of all stripes are not working out for large swaths of the human population, let alone other species.

We have experienced an irreversible loss of innocence in regard to the weather. Nowadays, the weather offers tenuous neutral ground, at best (same goes for “nature,” even if cute nature posts on Facebook still rack up the “likes”). Whatever one’s approach to ecopoetics, it probably begins with this loss of innocence.

A typical “deep ecology” metaphor compares humanity to a “cancer” on the earth. Consider instead the poetry of Will Alexander, who actually wrote his way out of a cancer diagnosis. Today I read “The Sri Lankan Loxodrome,” presumably written while he was undergoing chemotherapy. Alexander’s poetry (along with his artwork and his performances) answer to the post-innocence state of nature on a planet convulsed with human change. It is a poetry of migratory, global, cosmographic scale, charged with the “stamina of wandering”: 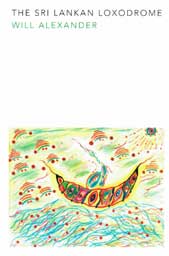 like the Guajiros in Columbia I fish
& I sustain myself like civet
like an ominous & “ubiquitous jackal”
.     .     .
which allows me commingling with my astral kin
the Tuareg
the Turkana
the Bambuti

The speaker of Alexander’s poem, a kind of post-Nubian Ancient Mariner, pursues a “loxodrome,” or rhumb line, an imaginary trajectory on the earth’s surface, cutting all meridians at the same angle.

Poet Charles Olson seems to have believed in a basic human tropism (after anthropologist Vilhjalmur Stefansson, amongst others), which he expressed in a letter to Ed Dorn about the poem “Migration in fact” (from The Maximus Poems) : “that the motion of man upon the earth has a line, an oblique, northwest-tending line.” Pursued indefinitely, a loxodromic course would spiral toward the pole, as the meridians converge.

Sound—a compass point for thinking, writing, speaking to get bearings in a more-than-human world—is the magnetic north of ecopoetics, and Alexander knows this. His poetry vibrates in the aural, a realm of proximity, contact, interpenetration and continuity. Alexander’s semantic resourcefulness and combinatorial ingenuity effect, across the irruptive nature of the imagery, a mesmerizing pattern, the lines of which sometimes seem to spiral around “masculine” (monosyllable) and “feminine” (trochee and dactyl polysyllable) end words. 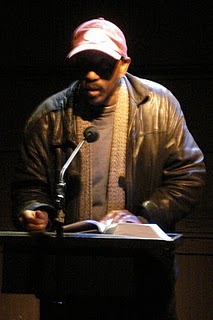 Alexander introduced his performance of “Provisions for the Higher Ozone Body,” at the 2011 MLA Offsite reading, by pointing out that humanity, located “on the Orion Spur,” at the edge of the Milky Way, is a “species on the edge.” I would say that most poets writing today might agree with this assessment, though what it means for their practice of poetry will vary widely. For Alexander, it means that “we’re on this planet, and we have to start to build an internal ark.” This recalls for me biocentric social critic Eileen Crist’s notion that we might have to focus less on species preservation and more on becoming “island preserves of animality.” Given our disproportionate effect on the planet’s ecosystems, “saving” other species may be directly related to our ability to imagine them, and to our capacity to save ourselves. As Alexander puts it in “The Sri Lankan Loxodrome”:

& my trawler
an ark
& my living on this ark
a kinetics that transcends
that obviates withdrawal
that perpetuates explosion through variegation
. . .
& so I’ve named my trawler Monoceros the Unicorn
at random times I’ll call it Ophiuchus the “Serpent Holder”

Alexander’s Glossary notes that Ophiuchus (a Milky Way constellation) “represents Aesculapius, a son of Apollo and a mythical healer, holding a huge snake (Serpens)—a symbol of regeneration.” (This image also connects with the loxodromic sailors’s meditative beheading of sea snakes.) Alexander combats “dark persistence in metric euthanasias,” “biometric reduction,” “stultification at the core of bloodless discourse,” and “inclement mythos/ which invades the body as cellular ruination,” with poetry’s explosive variegation, its “prolific argumentation” and “turbulent infinity,” its concern with “the ubiquitous/ the simultaneous/ the vast interior instinct for the pelagic.” Regeneration is sinuous, multiplying of nuance, while the reductivism that still rules humanist discourse (including its “avant garde”) leads to inflammation.

Ecopoetics: multiplicity, simultaneity, collapsing of interior/ exterior boundaries, restless migratory intelligence. Not retrospective elegy but a proleptic healing (Aldon Nielson has called Alexander’s a “yet more projective verse”). An uncanceled wavering and a “brimstone fire” of focus, unflinchingly alert to the vast sentient suffering, also to the astonishing resourcefulness and the yet unimagined forms of life on this planet at the edge of the Milky Way.

Alexander’s nuanced attention to the signatures of the constellations, to the topography of the Indian Ocean, and to the language denoting its exotic flora and fauna, as much as his attention to the medical language of various pathologies, communicates an ability to navigate the continuum between body and planet, outside the humanist psyche, with language that we might call ecoliterate—if the “eco” didn’t imply an at-homeness that doesn’t quite rhyme with Alexander’s Fortean universe. I’m interested in the extent to which this poetry might help us to rethink ecopoetics from within an optics, and an acoustics, not governed by margin/ center, alienated/naturalized binaries.

The difference between nature poetry and Alexander’s coruscating verse is like the difference between municipal recycling and the broad mental, cultural and social shift necessary to overcoming the systemic cancer (whether of body, society and/or planet) that seems to have beset human relations. A friend of mine recently spoke of her (so far successful) battle with breast cancer as a matter of locating and dissolving blockages, restoring flow. Alexander’s therapeutics direct “fiery avian transmixture” at the biometric blocks, the stultification and euthanasia, the repetitive myths enslaving the capitalist psyche to a biocidal course—to unlock global connections the snow geese remind us of, when they drop their wild poetry upon the muds of March. Applying pressure where the internal ark begins, in the human imagination, Alexander’s Afro-futurist errancy enkindles a language scaled to the challenges we face.