Going to meet the wave

Sometimes one must embrace death …

I love the sea; I fear the sea. Growing up on a tiny island meant a close relationship with the sea, but my primal fear of it, nurtured by sayings like, “Sea don’t have no back door,” has meant that despite knowing how to swim, I never venture far from shore and never ever swim out. Only strange, white foreigners do that, the locals say — even as I myself become foreign to my place of beginning. There are times, however, when the sea becomes heavy, even for those like myself staying relatively close to shore. Then, the waves rise as if in anger to crash against the sand. When this happens, my instinct, the human instinct I believe, is to run as fast as one possibly can away from it. Unfortunately, however, you can never outrun the wave. What I’ve learnt to do over the years at times like this is to go to meet the wave, to move into it, below the crest preferably, thereby standing a better chance of not being tossed around and hurt. Surfers know this, but theirs is a different world from mine, tightly bound as it is by fear. Often, over these past weeks, I have thought of the pandemic and the ensuing catastrophic developments as a wave — undoubtedly of tsunami proportions — to return to metaphorical language, and that I had to go to meet it and not allow it to toss me around. Many would succumb, “not waving but drowning” as we all contend with how “"far out” we and our beloved have been all our lives (“Not Waving but Drowning,” Stevie Smith). I had to try and own the experience somehow, embrace it perhaps, make it my own, but how to do that? Being in the demographic that is most at risk has meant that I cannot volunteer for any activity directly related to alleviating the fallout on those being severely impacted. What I was searching for was a container for the experience, which, in turn, took me to one of the fundamentals of being-human activities — the search for meaning and the desire to impose meaning on our lives, on phenomena, on events and experiences. Too often, however, this universal human activity of finding and imposing meaning has meant the simultaneous rejection of the same activity carried out by others, contrary to Gwendolyn Brooks’s assertion that “because (o)ur earth is round … we can hold completely different / points of view and both be right” (“Corners on the Curving Sky”). But I also caution myself about the rush to meaning, so much a part of our training in Europositive schools of thought — question, analyze, quantify. Immediately. This approach, the foundational ground of the scientific method, has brought us many “advances,” but I want to stretch Glissant’s advocacy of the “right to opacity” on behalf of the oppressed to this situation and suggest that poetry perhaps offers the most efficacious way at present to maintain a certain “clear expression” of that opacity. Something akin to the negative capability of Keats — developing the ability to live with uncertainty. There will be experts enough who will analyze it all for us, but for now can we sit with the uncertainty, with the weight of the loss of life and livelihood, of social and familial intimacy, and grieve? As we need sometimes to sit with the dead body, feel the weight of its life, our loss, and mourn. Poetry offers us an opportunity now, in this moment, according to Lorde, to illumine the opacity of those “mixed feelings,” for as she writes, “within living structures defined by profit, linear power, by institutional dehumanization, our feelings were not meant to survive.”

Sometimes the earth refuses to die … 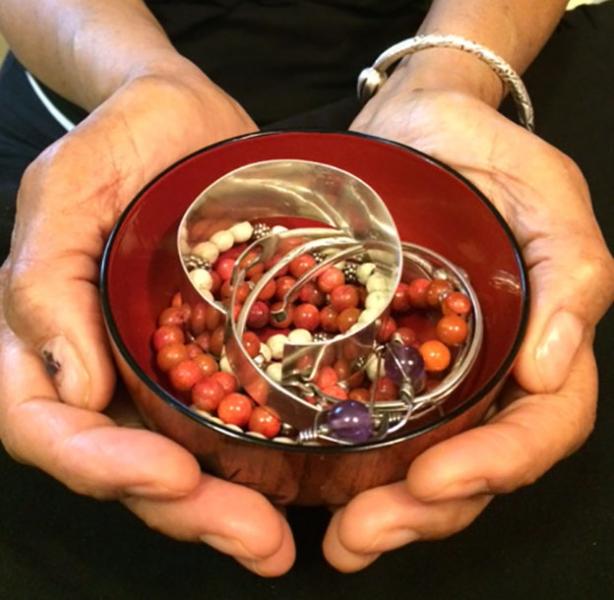 I have journaled sporadically about “it”; jotted notes about “it”; turned from “it”; turned towards “it”; have even tried to love “it,” but I’m stuck with and in “it.” “It” being COVID-19. This blog has become a container of sorts within which I explore my “mixed feelings” and how they relate to my way of life— poetry. For instance, do I really want to return to “normal,” when normal has meant the plunder of the earth’s resources, the wars for these resources, not to mention the practices that destroy, dehumanize, and oppress life in its myriad forms on this earth? The simple answer is no. I also fear what the new “normal” will mean as states appropriate increasing power to themselves, with our fear-filled consent, and corporations leverage the crisis to further control and manage our lives and our data. But normal also means people returning to work to earn their living. It means sitting and reasoning with friends and family. Normal means pressed up against bodies — black bodies — during the carnival season, as we allow the music to move us along the streets. Do I want to return to normal? Oh, very, very yes. These are impossible choices, if choices they be, stretched as we are between the Scylla of an economic and cultural system committed to destruction of the earth and its resources and the Charybdis of a future that promises more of the same.

Several weeks ago, before I began this blog, I decided that I would choose to give up something. It seemed that in allowing myself choice, even in the already restrictive situation of the lockdown that had been imposed on us, I was reappropriating a sense of control. I would only wear black, I decided, not necessarily out of a sense of mourning, but rather out of a sense of establishing some control over aspects of my life. I would also remove one bracelet per day — I wear several — until I remained with one, a heavy silver bracelet from Trinidad. The only times I remove these bracelets is when I have to clear security at airports, times when my fear and anxiety reach peak levels. Now I was giving them up in a ritual situation of my own making. I also love earrings — particularly the ones with amethyst stones I wear daily. These I would also remove. Was it perhaps a modern-day appeasement to the gods? No. I asked for nothing in return and, surprisingly, the result was that I felt a greater sense of space and freedom. The effect seemed, indeed was, counterintuitive. Was it simply the act of imposing control through small and apparently meaningless acts in a situation in which one has no control? A young, Muslim colleague who didn’t usually fast during Ramadan shared with me her decision to fast this year: “I wanted to do something where I felt I had some control.” Another example, perhaps, of our attempt to make meaning in a catastrophic situation that appears to elude meaning. All of which brings me to ideas of limitation and restriction, which were central to the strategies I employed in writing Zong!, and which I will speak more about in the coming weeks. How is it that we discover freedom and abundance within limitation and restriction, both of which, as I’ve written about elsewhere, are among the resources of poetry? I would argue that the very survival of the earth depends on our being able to model versions of these practices in our lives and communities?

And so with neither map nor GPS, and much like the Traveller in Looking for Livingstone … with many, many questions, I travel light, no guide except something very ancient and hidden, even to myself, that Lorde alludes to in her essay “Poetry is not a Luxury”: “(t)hese places of possibility within ourselves are dark because they are ancient and hidden; they have grown strong through that darkness. Within these deep places, each one of us holds an incredible reserve of creativity and power, of unexamined and unrecorded emotion and feeling. The woman’s place of power within each of us is neither white nor surface.”

Universally and with varying degrees of intensity, depending on where we live, we’ve been called on to stay at home and do nothing except be — indeed, it could be said that, as with one definition of poetry mentioned earlier, we’ve been called on to make “nothing happen.” However, in accomplishing this somewhat contradictory and prophylactic goal, we have made something happen — with different rates of success, we have been controlling the spread of the virus. I’m not arguing an equivalency here — between poetry and fighting the virus; rather, I’m drawing parallels, identifying resonances between the making “nothing happen” of poetry and the making “nothing happen” of the poetry of our individual and collective lives in and during the catastrophe of COVID-19.

To go in the dark with a light is to know the light.

To know the dark, go dark. Go without sight,

and find that the dark, too, blooms and sings,

and is traveled by dark feet and dark wings.

In her essay, “Poetry is Not a Luxury,” Audre Lorde urges her readers, especially women, to see poetry as a necessity, not a luxury. In these precarious times we are stalked by a deadly virus whose modus operandi is stealth; harvesting the old and sparing the young, it culls the poor, the ill, and the racialized, while imposing on us a brutal regime of physical and social separation disturbingly redolent of totalitarian dictatorships. Simultaneously we teeter on the brink of widespread economic disaster, not to mention the looming climate catastrophe. More than ever, we will need to find “places of possibility within ourselves (which) are dark because they’re ancient and hidden,” Lorde writes; places which, she argues, have flourished because of “that darkness.” The darkness she talks about brings to mind the powerful, foundational Ifa deity, Esu, of the Yoruba of Nigeria. Associated with darkness or blackness, which in turn represents the generative power of the womb, Esu represents both male and female qualities, embodying reparation as well choice and possibility symbolized by the crossroads. These are all ideas we will need to engage with in the coming weeks, months and even years. COVID-19 has, indeed, brought us to a crossroad — perhaps to many crossroads. Some may even say, the ultimate crossroad of existence. Others may say that we have already made the fatal choice regarding climate change. Even so, the question remains: what choices will we make in the days ahead?

For Lorde, approaching “poetry as illumination” helps us to “name … ideas which are — until the poem — nameless and formless, about to be birthed, but already felt.” Covidian catastrophes: deep, dark places of light takes its title from those ideas, and will become a container on the journey to my, and our, own deep, dark places using the illumination of poetry.

M. NourbeSe Philip is a poet, essayist, novelist, and playwright. A former lawyer, she lives in the space-time of the City of Toronto. She is author of five books of poetry, including the seminal She Tries Her Tongue; Her Silence Softly Breaks, as well as four collections of essays, including her most recent, BlanK. Her fiction includes several short stories and the young adult novel, Harriet’s Daughter, winner of the Canadian Library Association Book of the Year Award for Children (1989). Her most recent work of poetry is the hauntological, genre-breaking, book-length poem Zong!, which engages with the law, history, and memory. Among her awards are the Pushcart Prize (USA, 1981), the Casa de las Americas Prize (Cuba, 1988), thePrairie Schooner Lawrence Foundation Award (USA,1994) and Guggenheim and Rockefeller Fellowships (USA, 1990, 2005). She has been a finalist for the Dora Award (1999), the National Magazine Award (1998) and the Max and Greta Abel Award for Multicultural Literature (1989). She was awarded the Elizabeth Fry Rebels for a Cause Award for her social activism through her writing. In 2020 Philip was awarded 2020 Pen America Nabokov Award for Achievement in International Literature.

Language under pressure
Shaman/poet/shaman
Going to meet the wave
Death's great black wing
'Mi say mi cyant believe it'
Fuck poems
In extremis
We are many and if not now, when?
Big poems