Disfiguring Abstraction: a performance at MoMA on April 3

a performance at the Museum of Modern Art on April 3, 2013 at 12:30pm in the Inventing Abstraction show on the sixth floor of the museum, assembling under the Network Connections sign at the beginning of the exhibition. Part of the series Uncontested Spaces: Guerrilla Readings in Kenneth Goldsmith's "Poet Laureate" program. This reading is a supplement to "Disfiguring Abstraction," an essay on the Inventing Abstraction show forthcoming in the Spring 2013 issue of Critical Inquiry (which begins with these aphorisms and first paragraph):

You can be a museum or you can be modern, but you can’t be both.
––Gertrude Stein to Alfred Barr

No painting is so figurative that under certain conditions it will not look abstract.
––after Oscar Wilde

What color is abstraction? It can’t just be white. Its invention in time (for example, 1910 or 1912) only means that it creates a holding space for abstractions from other times and places. To centrally locate one locus of abstraction would be to diminish the radicality of abstraction’s connections to its others – or its engendering of its others. 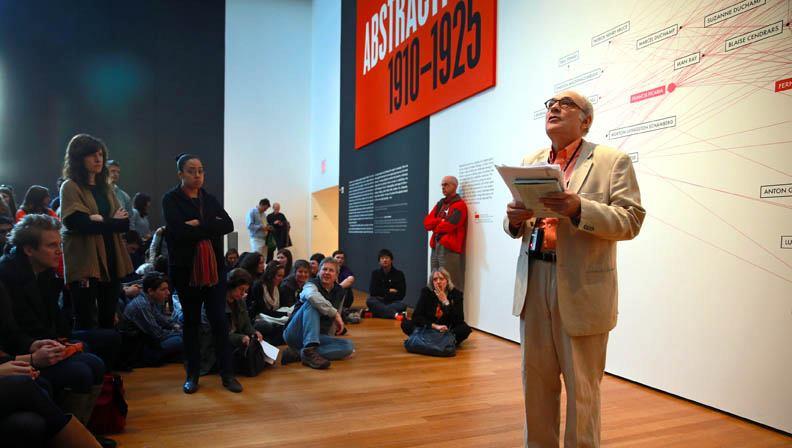 Because of time limitations, only part of this program was performed.
Note links to earlier MoMA performances of Loy and Marinetti.

The performance dedicated to the memory of Thomas McEvilley.

photos © Lawrence Schwartzwald; may not be used without permission.

see also: drawings of the event by Karin Katz

and of related interest:
my conversation with Dominique Fourcade,  "La poétique, l'écriture de la poésie et l'invention du modernism" (Poetics, the writing of poetry, and the invention of modernism) presentated at the  Gertrude Stein and the Arts  conference, which was part of the Matisse, Cézanne, Picasso... L’aventure des Stein   at the Grand Palais in Paris.