Cronkite, Stein: From the annals of odd convergences

Walter Cronkite met Gertrude Stein. Here it is, as reported by the NY Times:

A 1935 profile of Gertrude Stein from The Daily Texan, unearthed by the student newspaper of the University of Texas at Austin and published at its Web site, was written by Walter Cronkite, who was an 18-year-old undergraduate at the university when he wrote it. (Mr. Cronkite’s memorial service was on Thursday; a report by Brian Stelter is here.)

Speaking to Stein in advance of her appearance at the university’s Hogg Auditorium on March 22, 1935, Mr. Cronkite wrote that, even though he “imposed upon her at a late hour last night,” the author was “genuine — the real thing in person. Her thinking is certainly straightforward; her speech is the same.”

After recording her attire (“a mannish blouse, a tweed skirt, a peculiar but attractive vest affair, and comfortable looking shoes”), Mr. Cronkite talked with her about the proper role of the writer and the impact of the Great Depression, then in its sixth year.

Donald Davidson, from “Grammar and Rhetoric: The Teacher’s Problem” (1953):

In our time, the conjunction and has too often been the mark of a timid evasiveness in which I do not mean to indulge: “He was an old man who fished alone,” writes Ernest Hemingway, “and he had gone eighty-four days now without taking a fish.” The philosophy of Hemingway, as man and writer, is latent in that characteristic conjunction and. It bothers Mr. Hemingway to think that there may be some relationship between objects other than a simple coupling. “A” and “B” are there. The inescapable act of vision tells him so. But Hemingway rarely ventures, through grammar and rhetoric, to go beyond saying that “A” and “B” are just there, together. Similiarly, our diplomats and Far Eastern Experts long had a habit of declaring that there was a Red Russia and a Red China, with the tender implication that such a conjunction was entirely innocent. Political theories for nearly two centuries have coordinated liberty and equality, but have too often failed to tell us, as history clearly shows, that liberty and equality are much more hostile than they are mutually friendly; that the prevalence of liberty may very well require some subordination of the principle of equality; or, on the other hand, that enforcement of equality by legal and governmental devices may be quite destuctive to the principle of liberty.[Source: The Quarterly Journal of Speech 39, 4 (December 1953), p. 425.]

Any one doing something and standing (Stein) 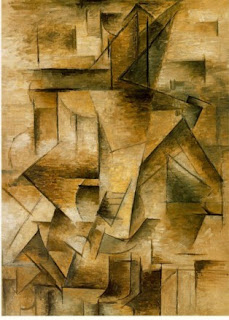 New audio. A brief informal introduction to cubist language by way of Gertrude Stein and Ernest Hemingway (the 1920s Hem, to be sure).

Three poems in retrospect, with an introduction

[The following is in celebration of the recent publication by MadHat Press of Selected Poems by Harry Crosby, which brings back the work of a major but twice forgotten avant-garde poet from the period of American poetry between the two world wars.